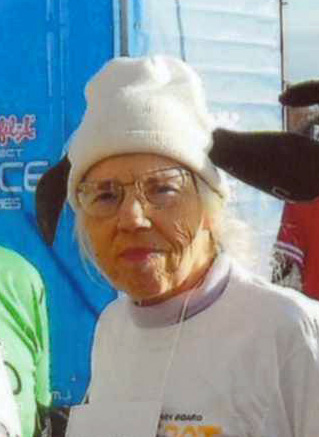 Margaret Gates, 72 years, finished her race on Earth and crossed the finish line to Heaven on July 18, 2017 at her home. Margaret was born Oct. 14, 1944, in Los Angeles, Calif., to Leslie Lee and Jo Earl (Smith) Kimbel. Margaret was an Air Force veteran and served during the Vietnam war. During her time in the service she was involved with military intelligence. After serving in the Air Force, she attended the University of Idaho, and tutored while a student. On Oct. 7, 1972, Margaret and Herman Gates were united in marriage in Bellevue, Nebr. Margaret and her husband were Christians and members of and attended Red Bank Baptist Church. She had a passion for running marathons, and her favorite was the Pikes Peak ascent in Colorado. In January Margaret was inducted into the Ozark Mountain Ridge Runners Hall of Fame in recognition of her inspiration to other runners. She enjoyed writing poetry and short stories. Margaret had a sharp humor and keen wit which will be greatly missed by all who knew her. Margaret was preceded in death by her parents. Margaret is survived by her husband, Herman of the home; one sister, Betty Tabell, of Pasadena, Calif.; and many nieces, nephews, and other family and friends. Memorial services for Margaret will be Friday, July 28, at 7 p.m., at the Red Bank Baptist Church. Pastor Randy Hilton will be officiating. Cremation services conducted by Clinkingbeard Funeral Home, Ava, Mo. Memorial donations may be made to a local veterans association. Online condolences may be made to www.clinkingbeardfuneral home.com.