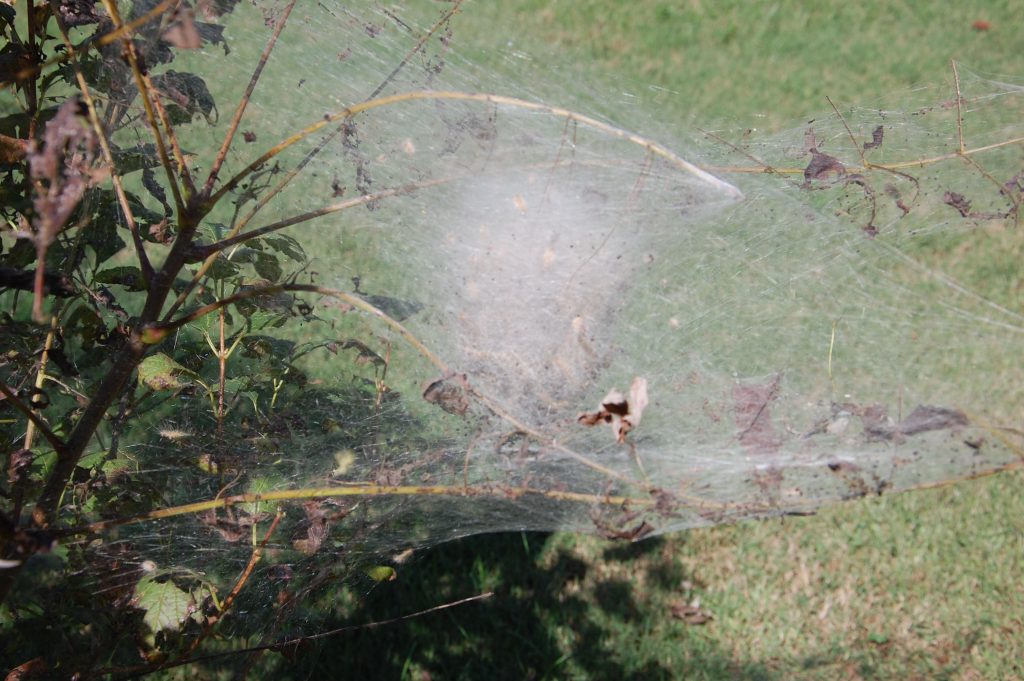 SPRINGFIELD — Fall has arrived and so has bug-filled webbing on tree branches. The bad news is that webs can become large, unsightly, and loaded with hundreds of caterpillars. The good news is that the webbing and worms seldom ever do permanent damage to trees.

“Caterpillars spin protective web around foliage, eat everything inside and then increase the size of web to include more food,” said Kelly McGowan, horticulture educator with University of Missouri Extension. “There seems to be a very high population of webworms this year.”

Fall webworms are a serious pest of 100 deciduous trees and shrubs (except conifers) found in Missouri. Favorite trees for web worms are walnut, hickory, persimmon and wild cherry.

“Trees may be heavily or completely defoliated by web worms,” said McGowan.

Although unsightly, damage from the fall webworm is normally inconsequential since trees will soon be losing their leaves. The worms only eat this year’s leaves, and the limbs and buds inside are unharmed.

“Population size is cyclical, and worm numbers usually decline after two or three years of heavy infestation,” said McGowan. “While unsightly, they typically won’t do permanent damage since plants are about to lose their leaves for the season.”

Beginning in the spring and throughout the early summer, adult tent caterpillars emerge from the ground litter or just below the soil surface where they overwintered as pupae in silken cocoons.

Grown caterpillars are about an inch long. They are light colored and covered with tiny bumps from which arise tufts of long, light-colored hairs. The head is either orange-red or black.

Eggs are laid in hair-covered masses, each consisting of several hundred eggs, on the undersides of leaves. Newly hatched larvae immediately begin to spin webbing over the foliage they are feeding on. As the larvae grow, they enlarge the web nest to enclose more foliage.

Larvae from the same egg mass stay together in the nest until the last larval instar (stage). They then leave the nest and feed individually before pupating.

“At the end of each generation the webbed nests can be large and contain excrement, dried leaf fragments and shed skins of the larvae,” said McGowan.

During high population densities, small to moderate-sized trees may be completely covered with webbing. It also has been reported that the caterpillars may migrate from one tree to another.

MU Extension specialists try to discourage people from pruning web worms out of trees because it is expensive, ineffective and can damage the shape and appearance of small trees.

“I have had several people this week tell me that they have paid a lot of money to hire people to come out and prune them out of their trees,” said McGowan. “This can be harmful to the tree, especially this time of the year and is unnecessary. Uncertified tree trimmers usually run this scam on people who don’t know any better.”

Chemical control measures include use of bifenthrin or Sevin. However, insecticides would be used in mid-July when the webs are small.

“As we move into colder weather, the caterpillars will start to die off anyway,” said McGowan.

For more information, contact the lawn and garden helpline operated by the Masters Gardeners of Greene County at (417) 881-8909.