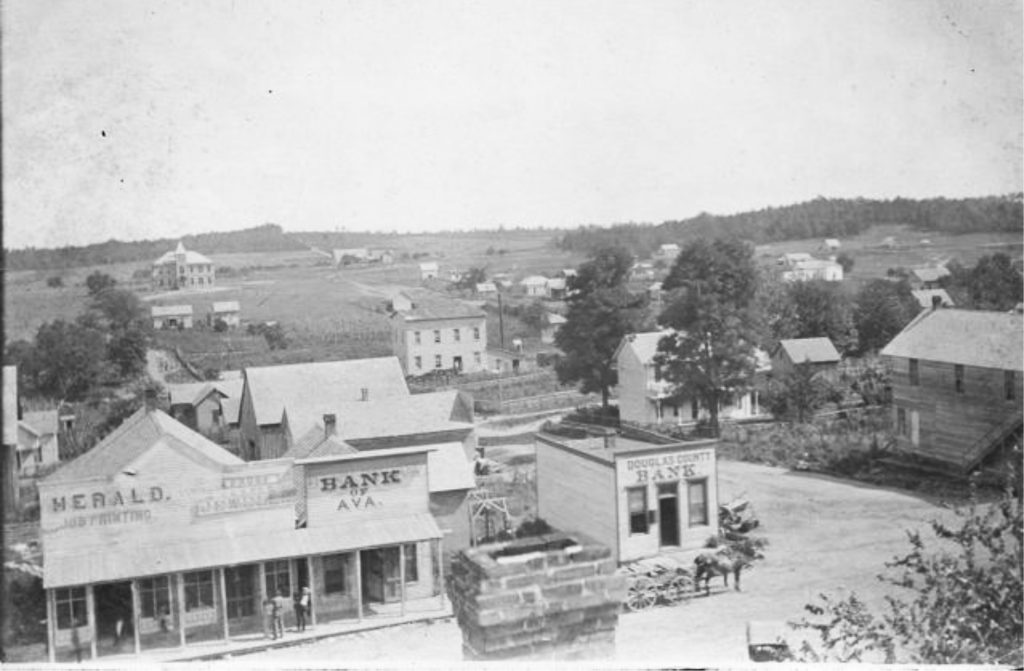 As we watch the construction of a new banking institution in our community, the HomePride Bank, my thoughts went to the early banks that were instrumental in the settlement and prosperity of our town.

The first bank of record was the Bank of Ava. A June 5, 1890 Herald news item stated: “Mr. J. Morgan Adams from Springfield, KS announced opening bank in Ava.” He purchased a lot on the north side of the Public Square and moved to his new building in December. This building is today the location of Marriot Music. A remnant of the history of that building is at the entryway where the word “BANK” is in the mosaic step.

Mr. Adams’ brother, Finis E. Adams, was the bank Cashier. The bank’s financial statement published in the Herald in 1892 listed $21,374 in total assets. At the end of that year, M.C. (Moses Calvin) Reynolds was bank President. Mr. Reynolds was a well-known resident who was Ava’s first postmaster and owned one of the first general stores in the early 1870’s. Vice-Presidents were J.M. Adams and W.J. Turner.

In 1897 J.M. Adams married Mr. Turner’s sister, Sally Jo Turner, the daughter of a prominent merchant in Arno. The Reynolds and Turner families both were officers during the lifetime of the bank until it closed in October 1930, after the stock market crash of 1929. Bank customers lost most of their money. This led to bitter legal proceedings and heartache for the families of the bank officials. The closing was a tragedy that affected many of the county’s families.

Ava was a prosperous town in the late 1890’s and a second bank opened in 1895 – Douglas County Bank. Both banks were on the north side of the public square.

J.C. Mency was the President. He had operated the Ava Mill, north of the public square, in partnership with Cap Edward Pennington. Mr. Dal Hartin was Cashier. He had served as Douglas County Circuit Clerk and Recorder for two terms, 1891-1894. It is believed this bank was no longer in business by 1900.

A photograph obtained by the Historical Society shows both banks on the north side of the square, along with the Herald Publishing Company.

The third bank was the Citizens Bank of Ava, chartered on July 3, 1905. This bank was financed by a group of local citizens. William M. Miller was the bank’s first President and his brother, Andrew P. Miller was the Cashier. The Miller brothers were sons of Henry M. Miller who deeded over 40 acres of his land in 1870 to provide a site for the village of Ava. The Citizens Bank of Ava was located on the north end of the west side of the public square. The building today is the law office of Dan and Chris Wade. The bank built a new building on Jefferson Street, south of the public square, in 1967. In 1980 the bank was sold to a bank holding company associated with a bank in Kansas City and was re-named the Union Bank. Today the bank is again owned by a native of Douglas County, Mr. Wayne Gott, and is a part of his business enterprises known as Town and Country. This bank just moved to a newly-constructed building at the junction of Missouri Highways 5 & 14, making an impressive entrance into our city from the northwest.

The fourth early bank in the town was the Peoples Bank of Ava, organized in March 1913. The bank’s capitalization was to be $15,000 with 150 shares issued at $100 per share. The first Directors were C.H. Burdett, I.N. Garrison, V.A. Dobyns, J.P.M. Norman, J.A. Klineline and M. Campbell. The bank’s President was C.H. Burdett and V.A. Dobyns was Cashier.

The Peoples Bank was the site of Ava’s first-recorded bank robbery. The robbery took place on June 9, 1921. Burglars drilled through the east wall into the bank’s vault. Private safety boxes were broken open and the bank’s case of notes, which were mostly registered government Liberty bonds were taken, but no bank money was taken. A car suspicioned as connected with the robbery was trailed by a posse headed by Cashier V.A. Dobyns to Rogersville where the trail was lost. On June 21, a sack containing much of the loot was found by a farmer in his hay field a mile north of Seymour. The recovered property consisted of private papers of bank’s customers, and were of no value to the burglars. On July 14, the case of bank notes was found on the Ava-Mansfield road in some brush about 30 feet from the road just over the Wright County line. The burglars never were apprehended.

In March 1933, U.S. President Franklin Roosevelt called for a “national bank holiday” to determine the stability of the nation’s banks to be determined by state bank regulators. The Peoples Bank of Ava did not reopen and was liquidated over a period ending around 1935.

Ava remains a prosperous rural community with five banking institutions: Town & Country, First Home, Century, Great Southern and the soon-to-open HomePride Bank. These financial institutions show faith in the citizens of Ava and Douglas County and the continued prosperity of our community.

Take heed to the old sayings: “A penny saved is a penny earned. Save for a rainy day.”

Items on display at the Douglas County Museum that relate to early banking establishments include –– from Citizens Bank: large photograph of the 1905 bank, a lobby desk (for customers), metal check holders, ledgers, photographs of bank employees and President Jim Reese, (1919 until 1963). There are also documents from the liquidation proceedings of the People’s Bank.

Information on early banks of Ava was taken from Douglas County Historical Society Journals: Summer 2003 “History of Banking in Douglas County 1857-1980 “ and Winter 2003 “Bank of Ava Transcript Resonates with Readers” and “ Citizens Bank of Ava-A Depositor’s Safe Haven for Decades from 1963-1984 authored by Ken Brown with assistance of Herman Davis.

A few years ago, a friend who is a member of a younger generation than me, told me that some day there probably would no longer be paper checks, all transactions would be electronically by Internet. I asked if she knew what “counter checks” were. She had never heard the term. I explained in the early days bank accounts did not have personalized checks with customer information, account number and routing number. The banks provided small folders of generic checks and stores had pads of “counter checks” from area banks. The customer would fill out payee, amount and their signature. The bookkeeping department employees had to recognize the signature and debit to correct account. I don’t think she believed me, but I have vivid memories of going to Richards Brothers grocery on the north side of the Public Square with my mother and she could use a counter check if she didn’t have her packet of checks with her. It must have been a nightmare to balance a checkbook. I have to now admit that her prediction has come to pass.

The Douglas County Museum is owned and operated by the Douglas County Historical and Genealogical Society, a 501 (c) 3 non-profit charitable organization. It is of the people and for the people of Douglas County, Missouri. The museum is located at 401 East Washington Avenue, 1 1/2 blocks east of the Public Square on Missouri Highway 14. The museum is open every Saturday from 10 a.m. to 2 p.m., with tours by special arrangement. Monthly meetings are held at the museum the third Monday of each month at 6:30 p.m. The public is invited to attend.

Join us on Facebook for the latest historical picture postings.