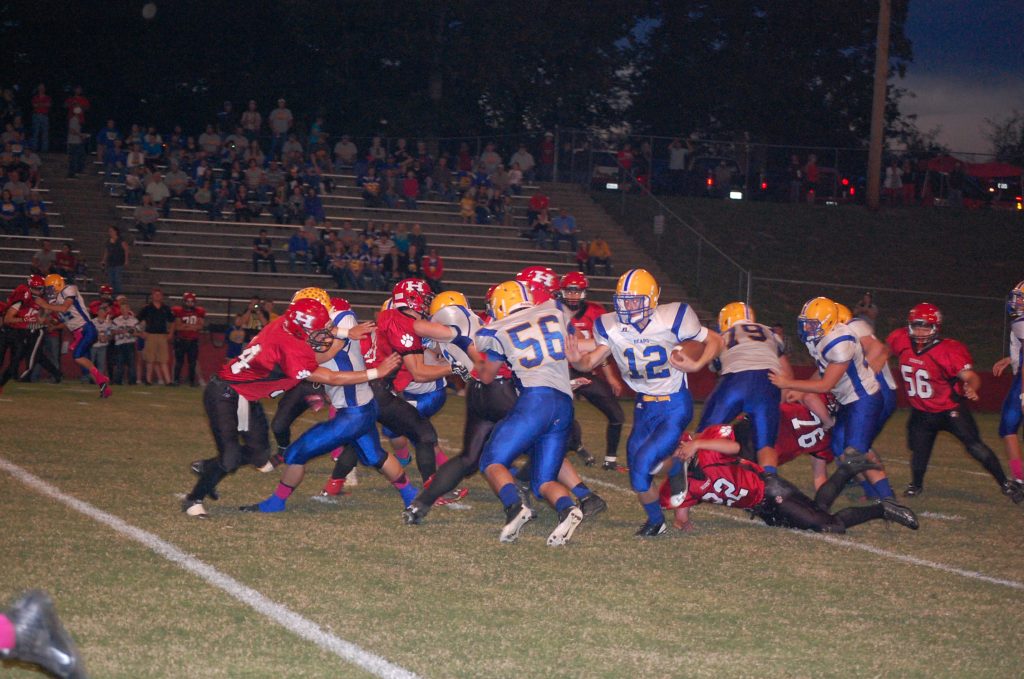 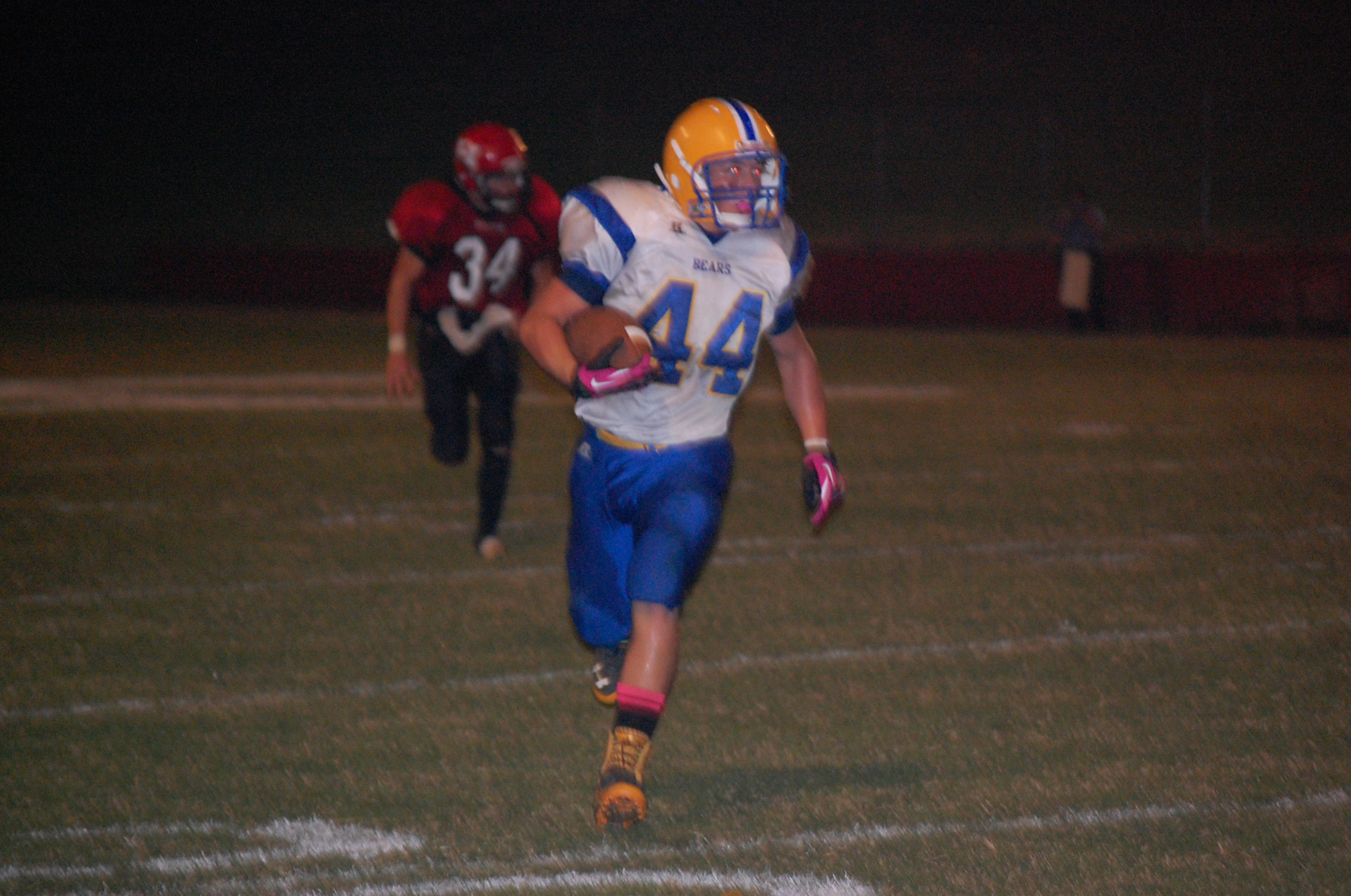 Morgan Smith runs back an interception at Houston Friday night.

The Ava Bears traveled to Houston last Friday night and spoiled the Tigers’ homecoming with a 48-8 SCA win.
Both teams had trouble holding on to the ball early, with five fumbles in the first half of play, as well as a mishandled snap from center on an extra point attempt.
Ava took a 13-0 lead in the first quarter, expanded that lead to 28-0 at the half, and made it 35-0 early in the third quarter.
After the Bears took a 41-0 lead early in the fourth quarter, Ava coaches began working lots of clean shirts into the lineup, and with 3:03 left in the game, the Houston starting offense punched the ball in for their only touchdown.
Ava’s Chance Boyd answered that score with an 80-yard kickoff return for a touchdown 14 seconds later, and the extra point finished the scoring for the night at 48-8.
Ava had more than 400 yards total offense including 285 rushing and 159 through the air.
Quarterback Cody Huff ran for one touchdown and passed for two others. Kane Thompson rushed for 160 yards on six carries, and two touchdowns, and caught two passes for 94 yards and a touchdown. Thompson also ran for a 2-point conversion.
Defensively, Morgan Smith had two interceptions for Ava and Brett Vinson had three sacks. Buster Davis led the team with nine tackles.
The Bears will be home the next two weeks, beginning with Homecoming this Friday night against the Thayer Bobcats, then the Cabool Bulldogs will be here on Oct. 18 for Senior Night.
The Bears are 3-3 overall and 2-2 in conference after the win over Houston. 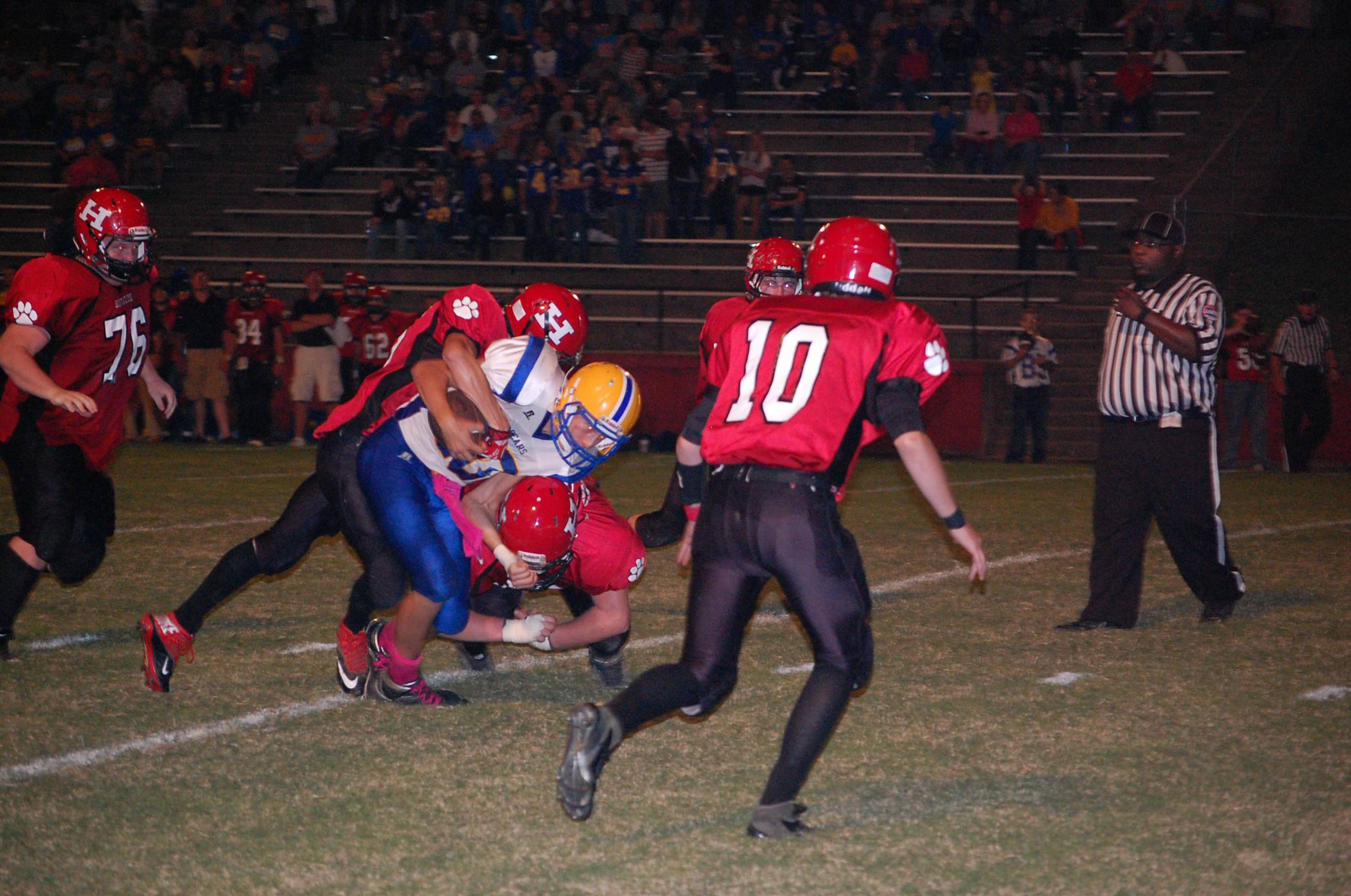 Although winning the game, the Bears suffered a big loss Friday night when junior Colton Akers left the game with what was later diagnosed as a broken collarbone. Coach Dan Swofford said Akers will be greatly missed because he does so many things well on the football field, both offensively and defensively.
After an exchange of fumbles early in the game, the Bears began a 70-yard scoring drive with just under 8 minutes on the first quarter clock. The big play was a 58-yard touchdown pass from quarterback Cody Huff to John Luebbering. Brett Vinson added the extra point for a 7-0 lead with 7:06 on the clock in the first quarter.
Houston drove all the way to the Ava 9-yard line but fumbled the ball away to set up a 91-yard touchdown run by Kane Thompson with 3:10 left. An errant snap from center on the extra point attempt could not be put down for the kick and the Bears had to settle for a 13-0 first quarter lead.
Houston fumbled the ball back to Ava following the ensuing kickoff, but the Bears would fumble the ball right back to Houston. Houston’s Nathaniel Alkire carried to the Houston 47-yard line, but Ava’s Morgan Smith picked off the first of two interceptions to get the ball back for the Bears.
With the ball at midfield, Huff passed to Luebbering once again for what appeared to be another long touchdown pass play. Offensive pass interference was called on the Bears, however, to bring the play back, and the Bears would wait until late in the second period to expand its lead.
The next Ava score would come at 3:39 in the second quarter on a 1-yard keeper by Huff. Thompson ran for the 2-point conversion to give the Bears a 21-0 lead.
The Tigers would punt the ball back to Ava with 2½ minutes left in the half, and with 58 seconds left, Thompson would score again on a 4-yard run. Vinson’s kick made it 28-0 at the half.
The final scoring drive of the first half included a 20-yard pass play from Huff to Thompson for a 1st-and-10  at the 20.
Huff connected with Thompson for a 54-yard touchdown with 10:10 left in the third quarter and Vinson’s kick put the Bears up 35-0. On Houston’s next possession the clock continued to run under the mercy rule and the remainder of the third quarter was scoreless.
With sophomore quarterback Caleb McFarlin running the Ava offense the Bears got inside the 10 to the 8-yard line but turned the ball over there on downs. 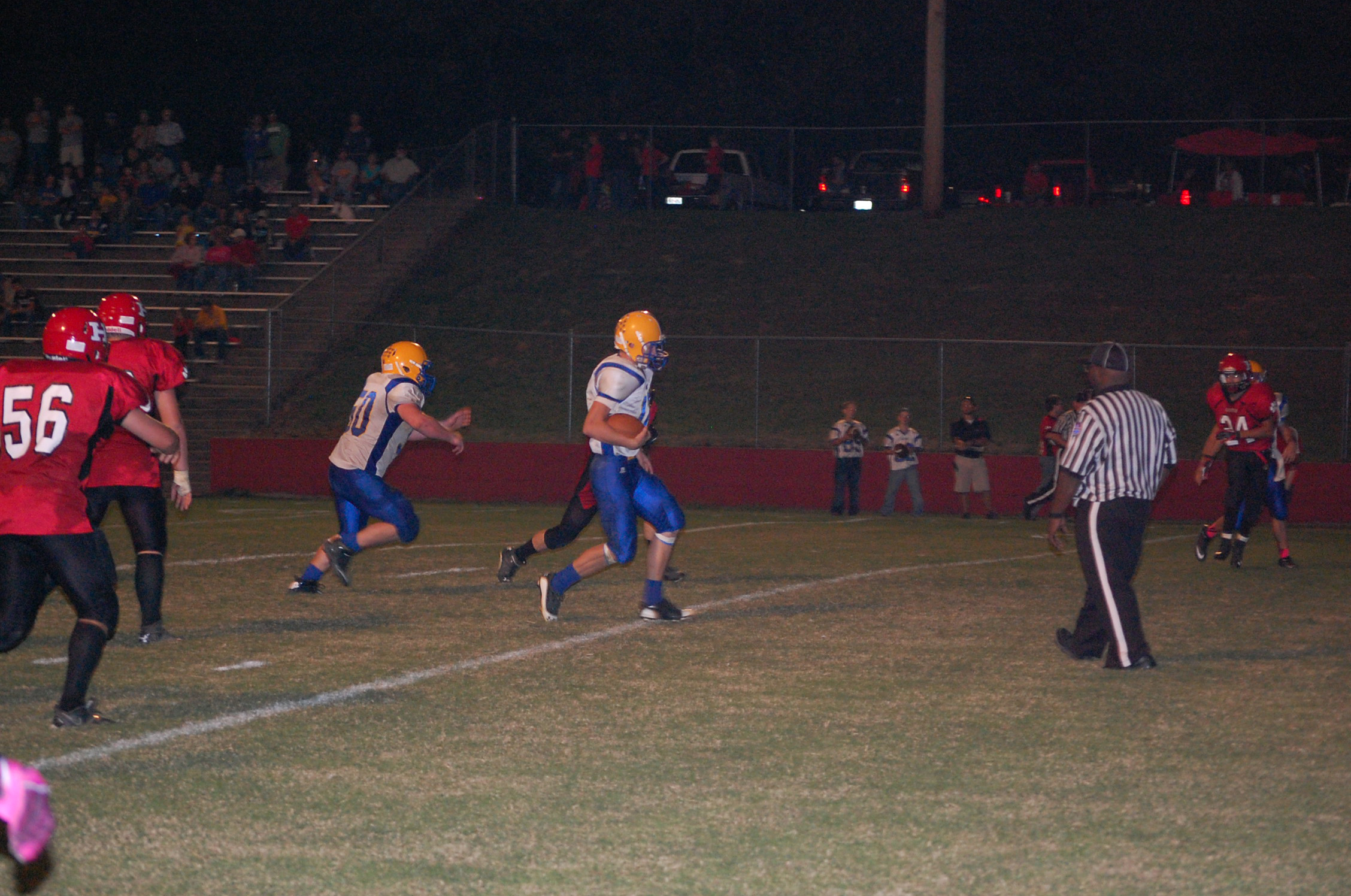 Ava’s Morgan Smith picked off his second interception and ran it in for an apparent score but a flag brought the play back, and the fourth quarter began with the Bears looking at a 1st-and-10 at the Houston 23. Smith carried to the 11 for a first down and an encroachment on the Houston defense moved the ball to the 6.
A high pitch to Vinson on a sweep play hit the ground but was picked up by the senior runningback who scrambled and found his way to the endzone for a 41-0 Ava lead with 10:16 remaining.
When a Houston punt rolled dead at the Ava 18-yard line with 7:04 left in the game, Ava’s JV offense huddled with freshman Eli Maggard at quarterback. The Bears moved the ball to the 22 but fumbled the ball away to set up Houston’s only score which came at the 3:03 mark in the fourth quarter on a 10-yard run by senior Nathaniel Alkire.
Chance Boyd would answer that touchdown with his 80-yard kickoff return that set the final score at 48-8.