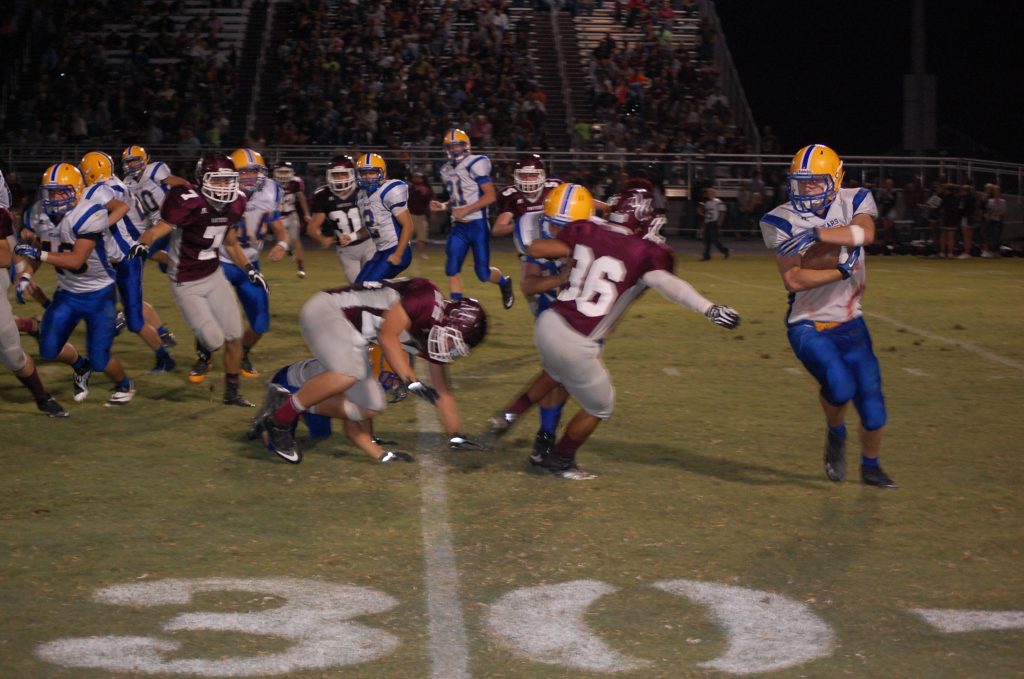 Colton Akers advances the ball to the Panthers' 30-yard line on the Bears' go-ahead scoring drive in the third quarter last Friday night. 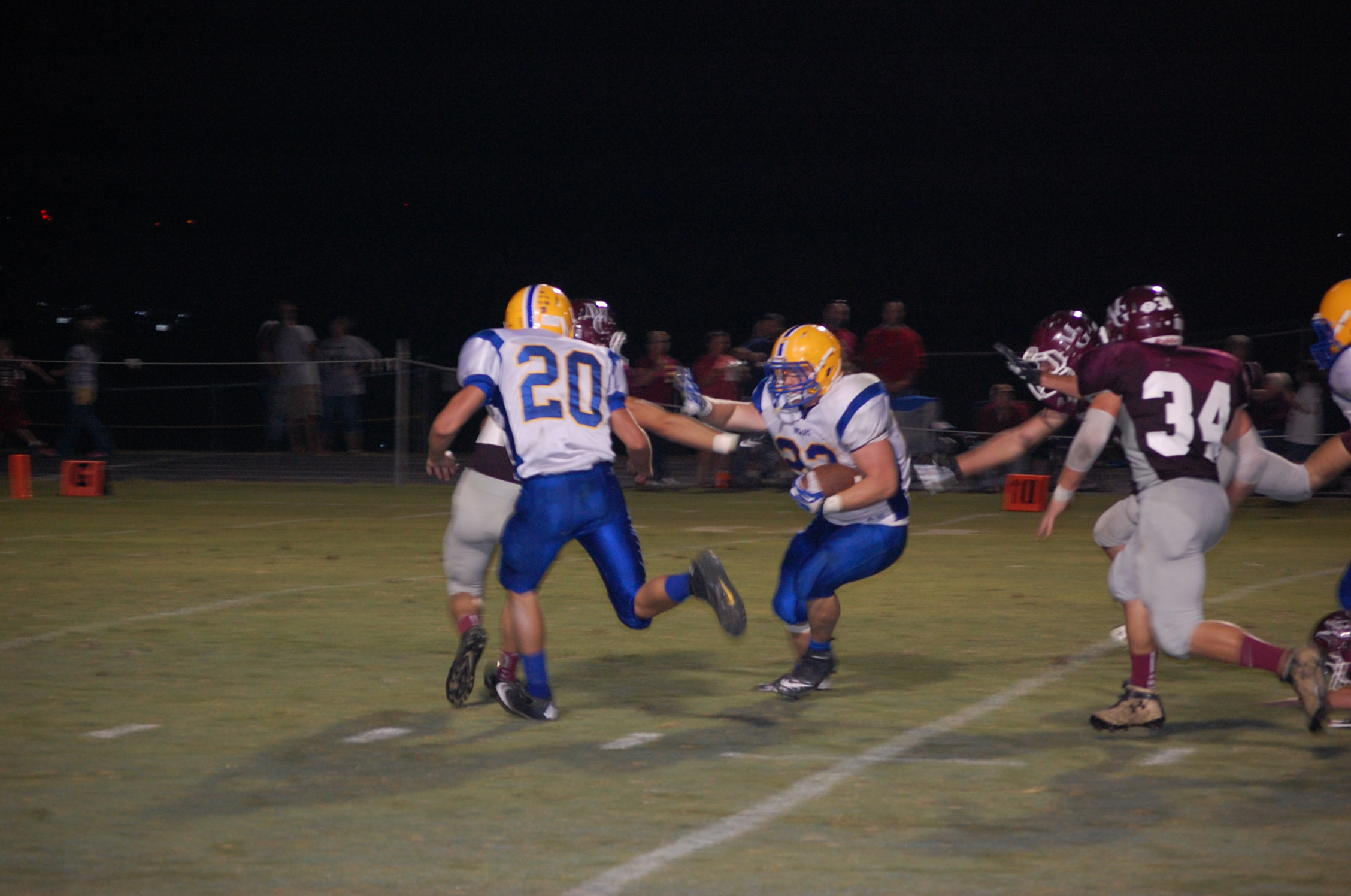 Chase Willis was Ava’s leading rusher at Mtn. Grove with 83 yards on 11 carries, including this one on Ava’s third-quarter scoring drive. Jesse Dean (20) moves in to throw a block for the ball carrier.

Before the Bears got off the bus at Mtn. Grove last Friday night they knew they were in for a battle. It’s always a battle when the SCA rivals meet on the gridiron.
Controversial calls by the game officials added to the intensity of the contest – on the field, on the sideline and in the stands – and when the game ended, Mtn. Grove had the win, 33-20, but even the Panther fans were not celebrating victory, although they were glad for the win.
Quarterback Cody Huff passed for two Ava touchdowns and ran for the third, and Brett Vinson kicked two of three extra points for all of Ava’s scoring.
Mtn. Grove took a 6-0 lead with 2 1/2 minutes left in the first quarter on a 5-yard run by Gavin Bolin. Bobby Otwell’s kick was blocked by Vinson.
The Panthers went up 12-0 at 7:18 in the second period on a 2-yard run by Ricky Healy. Quarterback Otwell attempted the 2-point conversion run and was stopped short.
Mtn. Grove’s kickoff following the score went out of bounds, setting up a 65-yard scoring drive for the Bears.
Starting from the Ava 35-yard line, Chase Willis exploded up the middle for a 30-yard run for a 1st-and-10 at the Panther 35. Quarterback Huff tucked the ball in and ran for another first down at the 23, setting Colton Akers up for a 23-yard touchdown run that came with 5:33 left in the second quarter. Vinson’s kick was good, and the Mtn. Grove lead was reduced to 12-7.
The ensuing kickoff return ended in a sideline melee in front of the Ava bench that resulted in an unsportsmanlike penalty on both teams.
Mtn. Grove began the series at the Panthers’ 37-yard line with 5:26 left in the quarter, but two Ava interceptions before the half would stymie any hopes the home team had of adding to the score.
Mtn. Grove advanced the ball into Ava territory but Kane Thompson ended the drive for the Panthers by intercepting an Otwell pass and returning it to the Ava 37-yard line.
As time was ticking off the clock, the Bears were unable to sustain the drive and gave the ball back to the Panthers on downs with 20 seconds left.
Unable to move the ball, the Panthers went to the flea-flicker halfback pass play, but Ava was not fooled and Akers picked off the pass to end Mtn. Grove’s second drive within a minute and a half of playing time, holding the halftime score at 12-7 in favor of the Panthers.
Ava’s Jesse Dean recovered a Panthers fumble at the Mtn. Grove 32-yard line with 8:05 on the third quarter clock to set up Ava’s go-ahead scoring drive.
Willis, who carried 11 times for 83 yards on the night, picked up a first-and-goal at the Panthers’ 8. Huff advanced the ball to the 4-yard line, then scored from 2-yards out with 5:49 left in the third quarter. Vinson’s kick was blocked, but the Bears were in the lead, 13-12.
With 2:54 left in the third quarter, Otwell connected with Healy for a 40-yard pass play to put Mtn. Grove back on top, 18-13. The Panthers’ 2-point conversion attempt failed. 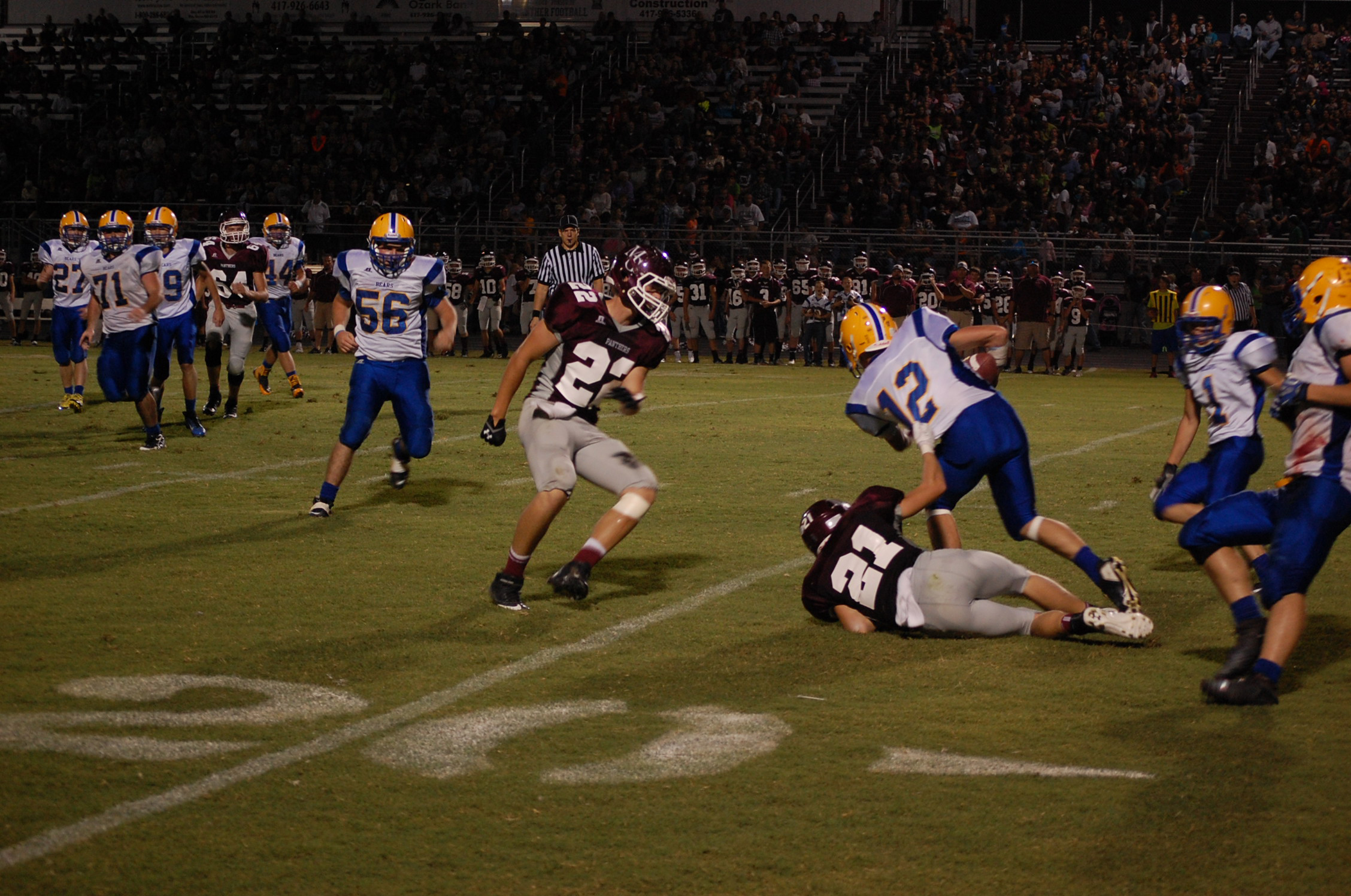 Mtn. Grove’s Jamison Cain grabs a handful of jersey as he attempts to bring Kane Thompson down after Thompson intercepted a Mtn. Grove pass in the first half Friday night.

The ensuing Ava drive saw the first of two scoring pass plays negated by a controversial illegal receiver call.
On 2nd-and-8 from the Ava 33, Huff connected with Akers for a 67-yard potential touchdown pass play that would come back an official ruled that Ava had an ineligible receiver downfield.
Ava would punt the ball away and the fourth quarter would begin with the Panthers in possession of the ball and the lead.
Mtn. Grove ate up the first 6 1/2 minutes of the fourth quarter before scoring on a 1-yard plunge by Otwell with 5:22 left in the game. Healy ran for the 2-point conversion to put the Panthers up 26-13.
After a nice return of the kickoff, the Bears began their next drive at the Ava 38-yard line with just over 5 minutes left on the clock.
Willis picked up a first down in Mtn. Grove territory. After a loss by the Bears, a pass interference call against the Panthers left the Bears with a 2nd-and-1, and Akers converted the first down at the Panthers’ 34-yard line.
On the next play the Bears saw their second touchdown pass play of the second half brought back on an illegal receiver call. That flag, along with a personal foul call against the Bears had Ava at 1st and 30 at the Ava 49-yard line when Huff connected with Akers for a 51-yard touchdown that came with 3:23 left. Vinson booted the PAT to pull the Bears within six points, 26-20.
Everyone in the stadium knew what was coming as the Bears lined up to kick off to the Panthers, and the Bears played it perfectly, or so it seemed, when the ball bounced off a Mtn. Grove player and Ava sophomore Paul Porter came out of the pile and handed the ball to the referee.
The officials huddled on the field, however, and awarded the ball to the Panthers at the 47-yard line of Ava on what was clearly the most disputed call of the night.
Instead of having the ball at midfield and trailing by 6 points with more than 3 minutes on the clock, the Bears found themselves on defense once again.
Mtn. Grove was forced to punt the ball away on fourth down, but a good punt was downed by Akers at the 10-yard line. A completion to Akers would have given the Bears some breathing room, but yet another flag backed the Bears up inside the 5-yard line, and on fourth down the Bears would give the ball back to Mtn. Grove at the 3-yard line.
Otwell wasted no time scoring from there, then booted the point-after for the 33-20 final score.
With 1:27 left, the Bears received the kick and Thompson returned it to the Ava 44, but a Mtn. Grove interception with 35 seconds left ended the game.
Ava had 165 yards rushing and 47 passing, for a total of 212 yards.
In addition to rushing for 39 yards, Akers led the team with 13 tackles on the night. Tristan Haltom had two tackles for a loss.
Ava’s schedule certainly gets no easier this week as they prepare for the trip to Mtn. View to take on the state-ranked Liberty Eagles.
The Eagles are ranked in the top 5 in the state, and are listed as high as No. 2 in some polls.
Coach Swofford says Liberty is a very good football team and the Bears will have to turn in another solid performance this week to play with them.