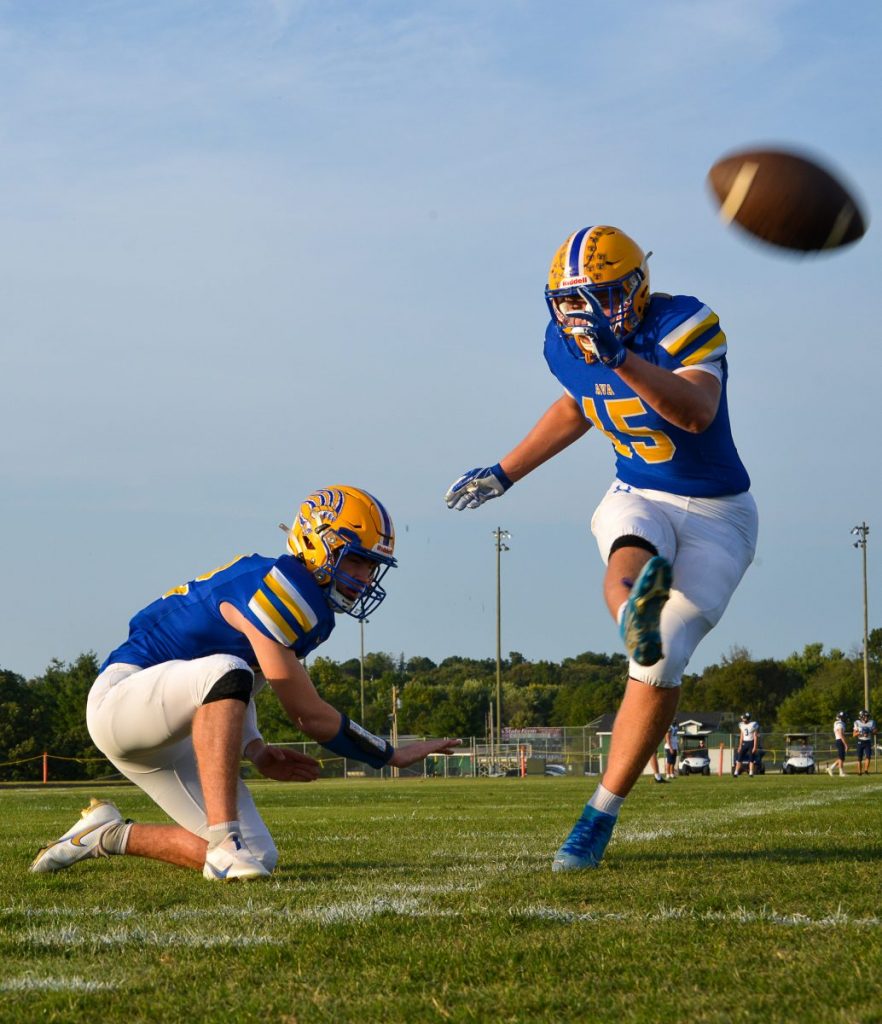 By Jason Hoekema Twitter: @JHoekemaPhotog Four more games before district play and the Bears are rolling on a five-win streak as they continue the season undefeated.

With their 45-6 stomp of the Salem Tigers and updated information via MaxPreps, the Bears now sit in fifth within Missouri Class 2 teams and stand alongside Thayer in the lead for the South Central Association Conference title.

“Homecoming is an interesting week,” said head coach Dan Swofford. “Everyone worries you are not going to play well. Our kids, I can’t tell you they didn’t play good, I think we can play better.”

Both the Bears and Bobcats are 3-0 in the SCA, but Ava carries the better overall record at 5-0. The two SCA juggernauts will meet on October 8, in Ava.

The Bears deferred to the second half letting Salem get the opening possession… almost as if they knew what was going to happen next.

The return was brought up to the Salem 33 by Kaden Coffman and before you could really catch up on the snap the ball was loose and recovered by the Bears.

Ava made slow progress out of the gate, getting from the Salem 33 to the Salem 31 over four snaps. The Bears got a fresh set of downs thanks to an 8-yard carry to the Tiger’s 19 from Blayne Mendel.

Zach Richards made the handoff to Spencer Skyles who made 19 yards look easy for the first touchdown of the game with 9:51 remaining in the first quarter.

The Bears defense started the game on their heels as the Salem offense marched from their own 24 to the Ava 15 over ten snaps. Big carries from Garrett Connell (10 yards) and Jimmy Barton (12 yards) got the Tigers over the 50 and into the Ava 38.

Then a 23-yard pass from Connell to Easton May increased the pressure as the Salem offense was on the Bear’s front step at the Ava 15.

Grady Goss was in the right spot on the next snap and broke up a pass intended for Barton.

May attempted to carry through the Ava defense but found no gain as the trenches enveloped him at the line of scrimmage.

Mendel has been in pass coverage and has been successful at breaking up several pass attempts from opponents, but lit up the stands with a pick and hustle back to the Ava 17.

The offense couldn’t make anything of the turnover with Ava punting it away with 1:39 left in the first.

Even with decent field position, the Tigers started out on the Ava 49 but wound up on their own 47 after four snaps. Bears took the ball back at their own 36.

Ava is a traditional rushing offense allowing players like Kayden Myers in 2019 and Hunter Adams make big gains on paper.

The Bears, however, took to the air over seven attempts and three completions for 93 yards starting with a massive 50-yard play between Richards and Skyles taking Ava to the Tigers’ 15.

“We just need to get better at it,” said Swofford. “There is going to be a point when we need to pass the ball and we need to work on that. I thought we did some good things and some things we still need to work on.”

Paused by the horn the Bears picked up 13 on a pass to Mendel which put Ava on the Salem two with four fresh snaps to get through.

Mendel picked up the carry and made the two-step into the endzone putting Ava up, 14-0.

The Tigers fell into a fourth-and-24 situation forcing a high and tight punt starting Ava out on the Salem 26. Skyles came up with 13 yards to erase the incomplete pass to Mendel on the previous snap.

Now on the Salem 13 the Bears kept at their, so-far successful, air game with an attempt at the pay dirt. Barton was in the spot and made the pick, bringing the ball back to the Salem 20.

“I think Salem had a big hunger to win a football game and do well,” said Swofford. “They stayed with us while we were trying to do a few things differently. It may have stagnated us, kept us from scoring as many points as we have been, but we have to try to get better sometimes.”

The Tigers appeared hell-bent on ensuring they were not shut out and made an 80-yard drive with pass completions totaling 54 yards. On the Ava 11 and the Bears’ defense answerless on three passes, Connell found Coffman on the far left of the endzone.

With a toe-drag before falling out-of-bounds the Tigers were able to avoid the shutout. Even though Salem attempted the extra point, a fouled snap was stomped by Ava defenders Logan Elliott and Kage Stewart.

“We were hoping for a shutout,” said Swofford. They scored a legit touchtown. I thought out defense played well.”

Consuming most of the quarter the Bears needed to make quick on some points to have the last say. Skyles nearly broke free but was tripped up midfield giving the Bears great position on the 50.

Ava had an offside penalty pushing them back to a first-and-15 situation. Mendel couldn’t make the completion deep downfield, pleading with the back judge for a pass interference call.

Coach Swofford burned timeouts and got the offense set up for a connection between Richards and Skyles for 30 yards. Richards was able to pick up another two, but time was nearly up. Swofford called for Ava’s final timeout with just four seconds on the clock.

Second-and-eight and 23 yards away from the pay dirt junior Jeremiah Blakely set up for a long field goal attempt.

Having kicked touchbacks majority of Friday’s game, Blakeley’s distance kicking paid off with a low, but long, 41-yard field goal to give Ava the final say of the half.

41 yards knocks Ben Loge’s 38-yard kick in 2012 down one rung, Blakely now holding the Ava High School record since 1948, when statistics started to be tracked.

This brings Blakely to two field goals this season, another two between the uprights will topple Brad Jumper’s season record of four in 1989.

Mendel was posted around the Ava 20 as the Tigers put the ball in play for the second half.

Then Richards recovers a fumble and Hunter Adams goes 43 yards for another six.

Luke Campbell was able to get in the slot to pick a pass, but nothing came of it for Salem after losing five yards on the drive forcing the punt.

Things became heated after the ball came loose from Mendel on the return who was brought down by a facemask.

One Salem coach jumped in the air while angrily yelling, “That’s out football!”

Unaware of the penalty being assessed on the opposite side of the field the coach did not let up and received a sideline warning.

Mendel then erased a five-yard penalty called for an illegal shift with 16 yards to the Salem six. On third-and-goal Adams killed the final five yards for the Bears’ third touchdown of the third quarter.

And Ava was not done, either.

Mendel was in coverage to push Salem into a fourth-and-14 situation. The obvious play was to punt the ball, especially with Salem on their own 30. The Tigers faked the punt and attempted a pass from Bradlee Gover to Connel which was broken up.

Ava took over on downs on the Salem 24, which Mendel took care of on the first snap putting Ava up 45-6 with 1:49 left in the third.

With a bleeding clock the first string was pulled from the field allowing Spensar Seiger to get some snaps in a real-game situation. With only 14 snaps in the fourth, the clock gave way to a 45-6 victory for the Ava Bears.

With 455 offensive yards over 43 snaps the Bears averaged 10.58 yards per snap and hit an average of 5.42 yards on first downs.

Houston is the next target for the Bears. The Tigers are also in Class 2, District 3 and will host Ava with a season record of 2-3. The Tigers are scoring an average of 21.2 points per game while allowing 24.8 points average to opponents.

Ava is flawless against Houston with an 11-win streak since 2010 and shadows the Tigers PPG with 42.4 earned per game while allowing just 12.6 points on average.

“We just got to try and get better at what we do,” said Swofford. “That’s always a challenge but you keep (the kids) focused and get better every day in practice then hope they are ready to play on Friday night.”