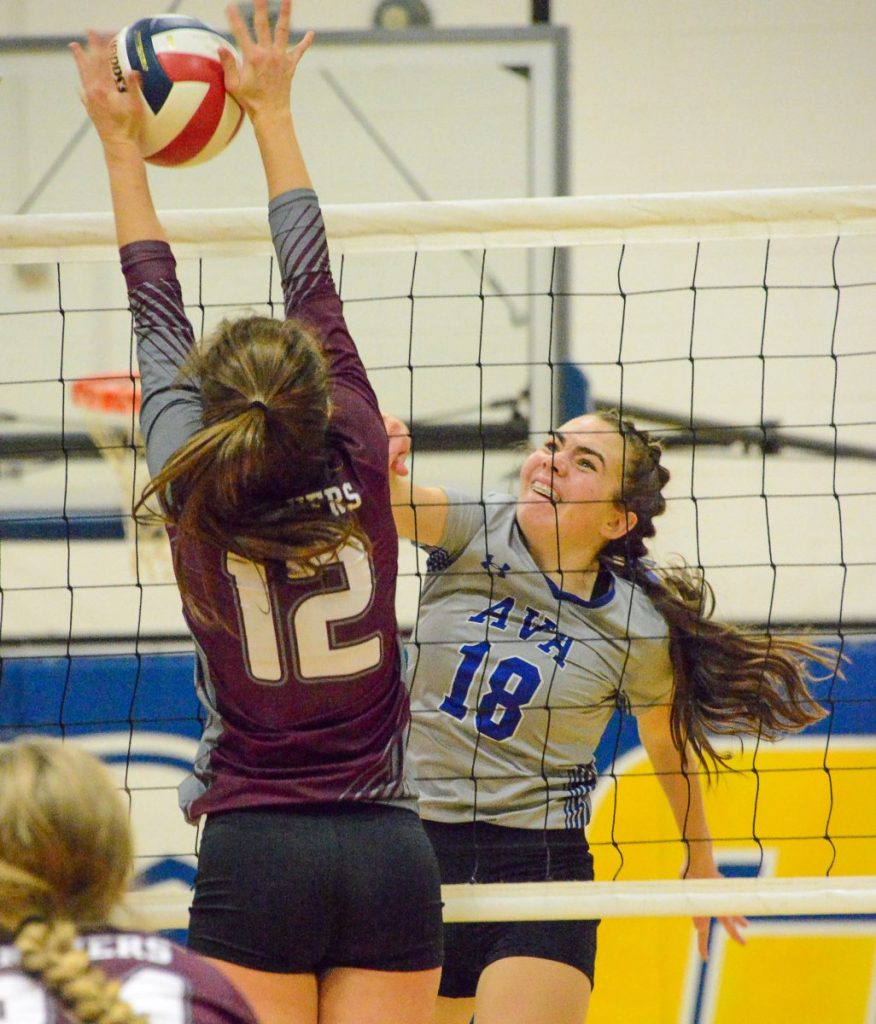 Schedule lets up, Lady Bears get weekend off

Swept twice at home is not what the Lady Bears had planned to cap-off homecoming week.

The Lady Panthers showed up with an ace up their sleeve in outside hitter Reagan Hoerning, who scored 24 points with powerful attacks for the kill. Even tired as she was in the third set, she continued to pour on the points with dinks to help Mountain Grove to victory.

A rested Ava team could have made all the difference, too.

Coming into Thursday’s match the team was at a .500 win percentage with a record of 9-7-2. At one point this season the team had played 30 sets in just 10 days and only this past weekend, had a proper four non-competition days to rest.

Some of the issues the Lady Bears continue to face are in the realms of communication and attack-shot placement. Errors at the net cost Ava eight points in the first set, five in the second, and nine in the third.

Those numbers plus ball handling errors were enough to progressively put the Lady Bears behind to a point where they could not recover.

The team, however, has a lot of good going for them as well with solid hitters in Keeley Akers, Baylan Alexander, Hanna Evans, Sara Mendel and Mallory Melton.

On defense the Lady Bears were successful in digs, saves, and even a pancake save. Lexi Gastineau leads the offense as a setter in addition to seniors Addy Croston, Lauren Hall, and Samantha Keyes on defense.

The Lady Panthers pulled ahead quickly from the gate; leading Ava 3-1 before Evans came up with a kill. Hall kept the rally alive with two digging saves, but the momentum was stopped when an attack from Mendel went over the end line.

A kill and tipped ball by Melton caught the Lady Bears up but the chase was ended with a carry call putting Mountain Grove ahead, 11-8.

Keyes came up with two attacks as ball handling errors tripped up the Lady Panther offense. A touched ball and attack error from Mountain Grove brought Ava back into contention with a score of 15-13.

A kill from Akers, attack from Melton in addition to a stuffed block from Evans and Akers kept Ava on the opponent’s tail the Lady Bears trailing by one, 19-18.

The official made a call change with a reception error from the Lady Bears leaving them behind, 22-18.

A kill and tip from Hoerning put the Lady Panthers at set point and a stuffed block ended the first set, 25-20, in favor of Mountain Grove.

The Lady Panthers blew out of the gate in the second set with a 9-3 lead with Ava missing the return on a free ball while Hoerning continued to deal damage. Most of those points, however, were made from errors on Ava’s side of the net.

Mendel started her attack with a stuffed ball, kill and then three consecutive double blocks with Akers before dinking it over for the point.

On the other hand touched balls, failed attacks, and a great dig by Addy Croston with no follow up lead to an 18-11 deficit for Ava.

Coupled with attacks from Mountain Grove’s ace, ball handling errors cost the Lady Bears dearly. Mendel was able to stop them on their set point, but one last error ended the set 25-19 for the Lady Panthers.

Set three was anyones’ for the taking as the Lady Bears kept within two points and tied thrice with an Ace from Hall, two big saves from Gastineau and a stuffed block by Evans and Akers.

Gastineau was making saves and doing everything she could to amp up the team’s energy, but poor shot placement and defensive errors put Ava on notice.

A kill from Jozey McPherson turned the tides as the Lady Panthers six points with Ava answering just one of them with a stuffed block by Evans and Gastineau while the board showed 15-11 for Mountain Grove.

Ava picked up another few points with a dink by Alexander followed by another from Gastineau to catch up a bit, but still trailing 16-13.

Then the Lady Bears were stuck. Two dinks from Hoerning and two stuffed blocks from Addy Welch and Claire Nelson propelled the Lady Panthers forward leading, 23-18.

A successful attack by Alexander halted the runaway but a tipped ball failed to stay in play with the Lady Bears going 0-3 with a score of 19-25.