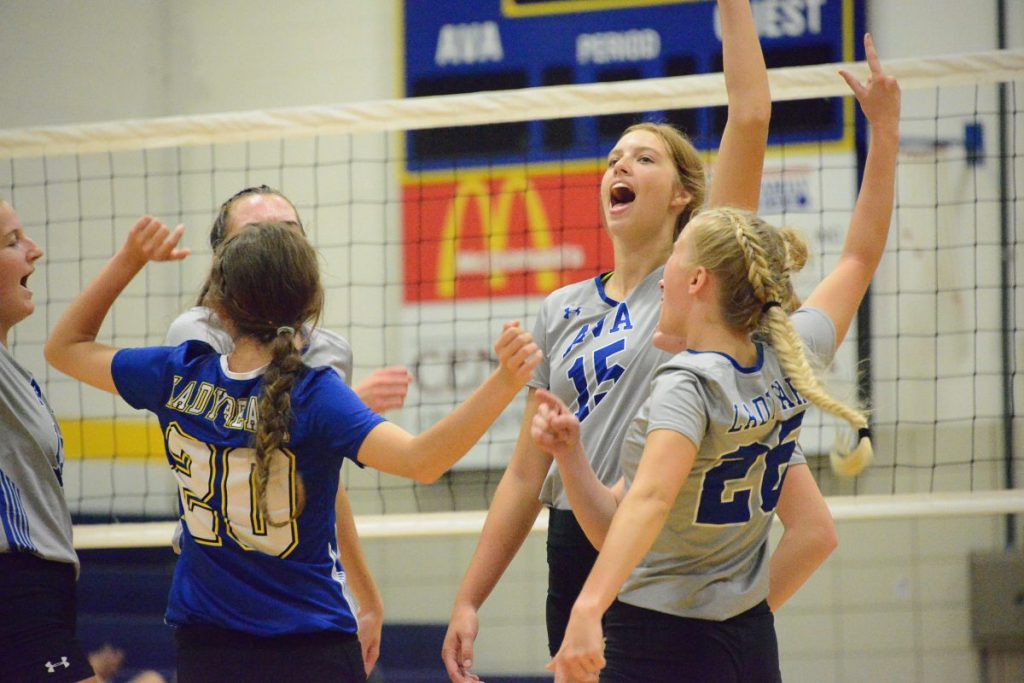 With four days of non-competitive activity the Lady Bears from Willow Springs showed up fiercely with two aces and kills to start the first set up, 6-0, over Ava.

If it were not for a ball handling error on Willow Springs, that rally could have taken flight. Ava got on the board but just as quickly faced the side out with a definitive kill from Connar Lowe.

Mallory Melton answered the call with a successful attack but resulting in Willow Springs losing control on their side of the court to bring Ava up another point but still leading, 7-2.

Eve with saves from Hannah Evans and Melton, a touched ball flew out of the boundary followed by a sweep of the ball by Willow Springs’ Hailey Sigman to stretch the score out, 9-2.

Willow Springs gsve up three points to touched balls and two returns which left the court. Ava came back within five before a kill from Sigman ended the attempted comeback.

Slowly, with kills from Sara Mendel and Keeley Akers, the Ava Lady Bears again came within five points before a tip ended their gains leaving them behind, 14-9.

Down, 20-12, the Ava Lady Bears took a time out to reassess the situation and break up the string of points given up.

An attack by Baylan Alexander marked the comeback for Ava, hitting off the attempted dig by Aubrie McNew. The Ava Lady Bears were able to out-score their SCA cousins (the Lady Bears), 13-3 providing a miraculous comeback.

Lead by kills from Mendel and Alexander, who later picked up an Ace, Ave rallied up to the set point topped off with a stuffed block by Lexi Gastineau for the win.

Ava took the momentum shift and broke out 7-3 thanks to stuffed double block by Evans and Alexander then another two Aces to Alexander’s count of six over the span of the match.

Ball handling errors allowed Willow Springs to come back and tie the set at eight before Ava picked up service thanks to a kill from Melton, one of five on Tuesday, which was followed by kills from Evans and stuffed blocks for points by Evans, Akers, and Melton.

The run ended with a kill from Aspen Crudgington but Ava didn’t let Willow Springs get far, trailing by no more than one for the rest of the second set.

Add up kills from Evans, Alexander, Mendel, and the set point was achieved on an Ace by Alexander.

An attack error by Crudgington put the set in Ava’s pocket, leading 2-0.

Third set was one for Willow Springs, clawing their way back with extra sets to determine Tuesday’s win.

Well matched through the beginning of the third set, leads swung back and forth until Willow Springs broke free to lead the set, 15-10.

Even with Mendel at the net and Gastineau setting the ball nearly every volley Ava was trailing but making up ground until a lift call was made against Willow Springs to tie the set at 19.

An Ace from Mendel and a couple of errors on the other side of the net kept Ava alive. It was a back row attack by Libero Lauren Hall which put Ava up.

A ball handling error which went out of play sealed the deal for Ava who lost the set, 25-27, but still led the match, 2-1.

The Ava Lady Bears kept at it with an attack by Alexander which led to a point. A kill push and a block for three by Evans, added up to a 6-0 lead for Ava.

Liz Sheehan returned the favor with a sweep past the Ava defense to put Willow Springs on the board, and the visiting team was able to crawl back up tying the fourth set at nine with a kill from Crudgington.

Ava took a timeout to regroup but a blocking error on Mendel and Alexander held them at nine points as Willow Springs chipped away to a 14-11 lead.

Melton ended that streak with a kill followed by a stuffed block by Mendel and Akers. Unfortunately. Carry was called on Akers followed by a ball handling error by Melton and kill error by Evans to allow Willow Springs up, 18-14.

Ava got a break with two failed attacks from Willow Springs. Both hits went into the net pulling Ava back within one with Melton at the serve.

Evans and Akers made back-to-back blocks during a battle at the net for a point followed buy a cross-court dink by Evans to bring Ava back within reach, trailing 22-19.

It was an attack error by Alexander which put Willow Springs on their set point, but Ava was able to hold them for just one more serve before another war broke out at the net.

Mendel and Sheehan were shoving and dinking the ball back to each other. Finally, the battle broke but the ball fell into Ava’s court ending the fourth set 25-22 for Willow Springs.

In 2020 the Missouri State High School Activities Association made a change in volleyball rules, increasing the number of sets needed to win to three of five in normal competition matches.

With Willow Springs making a comeback the match was set at 2-2. A 15-point set would determine the winner of Tuesday’s competition.

Ava quickly took control of the final set with a 6-0 lead thanks to an attack error by Lowe which went into the net. Willow Springs took the time out to break up the rally by Ava, and it worked.

A kill from Lowe got past Evans for the point, leading to a five-point comeback for Willow Springs with three kills for the momentum shift.

Time out Ava, to break up the rally.

The pause worked as a ball handling error and three kill errors, shots into the net, put Ava up 10-5.

Willow Springs with another timeout, the breaks seemingly helping to stop runaway rallies.

The visiting Lady Bears picked up three points to Ava’s two with kills from Crudgington and Lily Bolander.

Ball handling errors on Willow Springs’ part and a block/kill from Mendel allowed Ava to pull ahead, 13-9.

Add in a tip from Melton for the set point and an attack error from Willow Spring’s McNew and the Lady Bears took the match, 3-2.

Comebacks in the first, second and fifth sets put Ava on top for their first SCA win.

In all, Mendel delivered 11 kills, four blocks, and an Ace in addition to eight kills and six Aces by Alexander helped propel the Lady Bears into victory.

Evans delivered five kills, but was part of ten scoring blocks for Ava with Melton and Akers contributing combined totals of six kills and eight blocks for the Lady Bears.

Ava moves on against Thayer today. This will be the last home game for the Lady Bears until Ava hosts Mansfield on October 18.

The Lady Bobcats enter the court with a 3-3 record, pending results from their match against Salem Tuesday evening.

Ava holds more experience with a 10-8-2 record while many opponents have not faced such an arduous season.

An interview with head coach Bailey Loge was unavailable due to a technical issue with the recording.