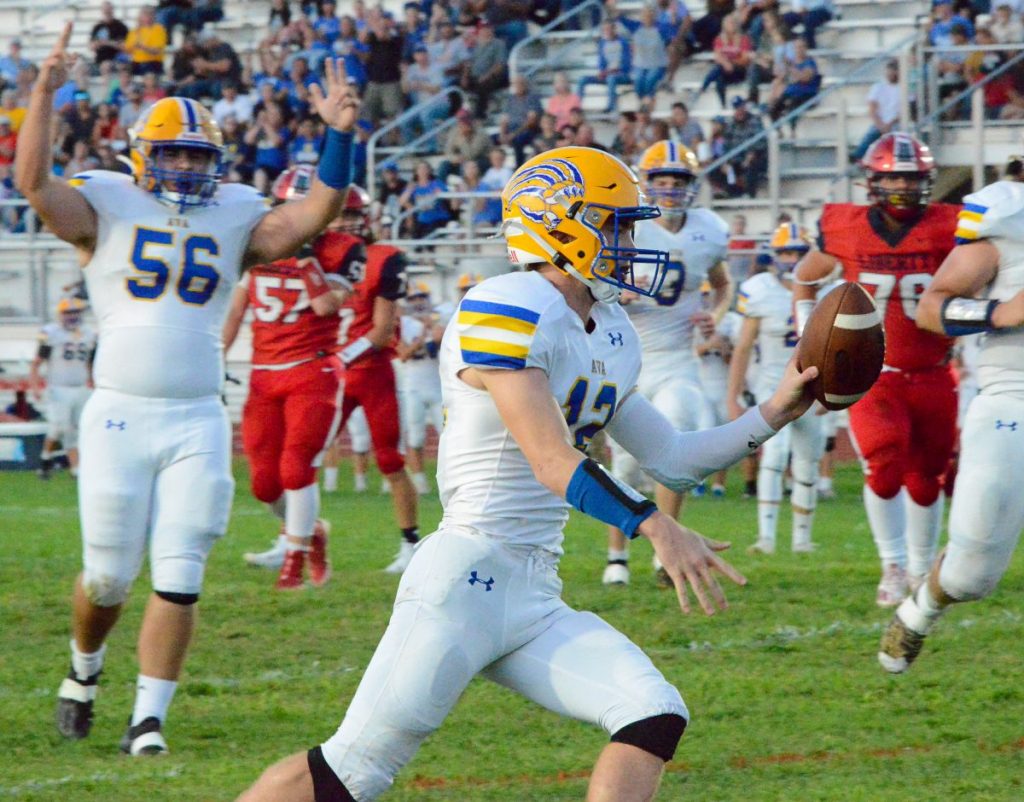 Ava High School senior Blayne Mendel (12) holds up the ball after reaching the end zone as Jacob Lakey (56) celebrates during a game against Liberty High School on Friday, September 17, 2021, in Mountain View, Missouri.

MOUNTAIN VIEW – Although the Bears (4-0) walked away with a 59-24 win over the Liberty Eagles (1-3), the team was handed costly penalties and committed mistakes which cost both yardage and points allowed.

The first set of downs should have set the tone for past Friday’s game. Ava deferred to the second half, giving the Eagles the first possession as the hosting team.

Not more than one minute later the Eagles were sending it away with a high and short kick to start the Bears on the Liberty 38. Immediately, Hunter Adams had his hands on the pigskin and ran up the left for 13 yards and a fresh set of downs.

The march continued with nine yards from Spencer Skyles, five from Zach Richards and the final eight tapped-in on third-and-five by Blayne Mendel.

Up 7-0 the Bears should have kept the momentum and handled business the same way they did in the first three minutes of the game, along with defensive plays like a pass deflection by Kage Stewart.

Instead, the defense opened wide in the middle allowing Tanner Ripko to rip through for six. The two-point conversion failed.

Problems did not start in the early in the game, performance before and after the halftime break is where trouble started.

However, Ava ended the first with a punt and under a minute left on the clock.

Skyles had picked up an earlier visit to the pay dirt and Ava lead Liberty 14-6 at the first horn.

The Bears carried on the same way. The defense pushed the Eagles back 17 yards before the punt and started out on the Eagle 37. Nearly identical starting position like the first quarter.

Adams came up big with 21 yards, running a game-total of 245 yards, and put the Bears within the ten and converted on third giving Ava a fresh set of downs near the goal line.

A snap later, Richards squeezed through the trenches for eight yards and the Bears third touchdown of the game.

The Bears gained 28 points from turnovers, Friday and the field caught fire (so to speak) when Skyles was in prime position to pick a pass intended for Noah Jester.

The Bears were unable get across the 50 and but holding penalty pushed Ava back behind the original line, which was at the Bears’ 31.

On fourth-and-sixteen the Bears went with a pass play to try and beat the fourth down, but Richards was picked-off by Adrien Pendergraft who made the approximately 65-yard dash down the line for an Eagle touchdown.

This was the first six of 18 points allowed on turnovers to the Liberty Eagles in Friday’s game.

Previously the Bears have allowed no more than eight, which Buffalo took for their tally in the season opener.

“You have to come ready to play every game,” said head coach Dan Swofford. “It’s not uncommon for games like this to happen after a big game with a rival, where you won and feel awesome.”

Liberty was adamant about making the two-point conversion every time they reached the endzone, which in one way, hurt them and their tally.

The Bears had a long march starting at their own 35 thanks to the return kick going out-of-bounds. Mendel picked up five, but Skyles was tripped up in the back field, losing three yards on the snap.

Adams ripped through the Liberty defense and picked up 11 yards on third-and-eight, keeping the drive to the endzone alive for the Bears.

Adams then picked up another first down, running 18 yards over two snaps. This put the Bears on the Liberty 30. Richards was able to hold on to the ball and rush 22 yards, putting the Bears in a first-and-goal situation.

A foul start cost them five yards, backing them up to the 13. Adams, again, came through for the Bears with an 11-yard dash to the two-yard line. Richards tapped-in the final distance and picked up another touchdown for the Bears.

With 3:26 left in the half the Bears did something, unexpected.

They kicked the ball off and special teams allowed Drew Ripko to pick it up on the Liberty six and run 94-yards for another six points. The two-point conversion failed, leaving 3:10 on the clock.

The Eagles had scored 12 points in less than a minute of game clock time. First a pick-six, then a quick-six on a return.

“We hadn’t faced adversity yet,” said Swofford. “I feel like we faced some with turnovers and the long kickoff return.”

Emboldened by the explosion of Eagle offense, the Liberty defense made it a point to try and stop the Ava offense from getting the last say of the half.

Adams had a big, 25-yard gain, running 41-yards on the Bears’ possession. However, even with eight yards run on third-and-twelve, the Bears ran out of time and made the field goal attempt.

Kicker Jeremiah Blakely made good on the 33-yard kick, leaving Ava up 31-18 with 34 seconds left on the clock.

First snap after the kick return Parker Holden was on the receiving end of the pass which accounted for 13 yards and the first down. In one, last-ditch, attempt the Eagles snapped the ball on the Ava 44-yard line and lateraled their way up the right side nearly making it to the pay dirt.

The Ava defense scrambled to stop the play but were spread out expecting pass action from the air-game opponent.

At the start of the third, Skyles lost his footing on the return and fumbled the ball. It was recovered by the Eagles who cleaned up the 24 yards, topped by a pass to Jester who made the endzone.

Three touchdowns and the only answer Ava had was a field goal at the end of the first half.

When asked what the players needed to do to prevent a repeat Swofford pointed to experience.

“Maturing,” said Swofford. “Maturing as players and making good decisions. I have a bunch of Type-A personalities out there and you love having them on Friday night, but they aren’t always easy to coach. They expect a lot out of themselves and a lot out of each other.”

This is when Spencer Skyles took the spotlight with big breaks of 64 and 34 yards for two touchdowns, breaking up the uncharacteristic action the Bears brought to the field earlier.

“He has breakaway speed, is a good blocker and he runs the ball hard when he is able to,” said Swofford.

However, the Bears still gave up 40 yards in penalties during the third quarter.

The Eagles failed to convert with a hold called on them, but Ava declined the penalty and took the ball. This is where Adams came up big with 46 yards on a single-snap touchdown to put the Bears up, 52-24.

The Eagles failed to keep their drive alive and turned over on downs at the Ava 47 after an incomplete pass.

The Bears were backed up to their own 33 following a block in the back and a procedure penalty for a total of 15 yards lost. Ava also put the Eagles on their own 44 with the ball resulting from a late hit out-of-bounds.

The Bears did recover from a first-and-14 situation thanks to Adams, who carried across four consecutive snaps and barely made the one yard to convert on fourth at the Eagles 40-yard line.

It was Adams who pulled free for 34 yards and the final touchdown of the game.

Ava was up 59-24 before allowing Liberty to get to their 37-yard line. A deep sack by Tidwell and Lakey sent the Eagles back to midfield where they were forced to punt.

At this point the clock was bleeding, meaning it did not stop in between plays because of the 30+ point lead. Even then, the Ava offense couldn’t get anything done while burning over six minutes and getting no further than their own 30.

Same happened to the Eagles, not gaining past their own 42 and punting it away with 48 seconds left.

Ava took over and did not snap the ball with the game clock running dry before the 25-second play clock ended.

A win is a win. In this case it was a 59-24 win for the Bears who continue undefeated.

However, this game cost the Bears 50-yards in penalties, 18 points allowed on turnovers, and three consecutive touchdowns by the Eagles whereas the Bears settled for just one field goal around the break.

On a more positive note Ava rushed for 432 yards averaging 6.65 yards per play and 8.5 yards on first-down snaps.

The Bears move on to their homecoming week, facing Salem tomorrow here on home turf. The Tigers are 0-3 this year, averaging only 10.3 points per game while allowing 28.7 points in each match up they faced.

In-conference, the Tigers have taken losses from Houston and Thayer. The Bears are 8-4 over the last 12 years and are currently on a five-win streak against Salem.

“Homecoming is always very special for Ava,” said Swofford. “I always felt like our kids played well at homecoming. As a coach you’re always worried about having a game like this. In my experience these kids usually come ready to play and we have some barn burners there. (Salem is) going to have some big boys, but we just need to come ready to play football.”