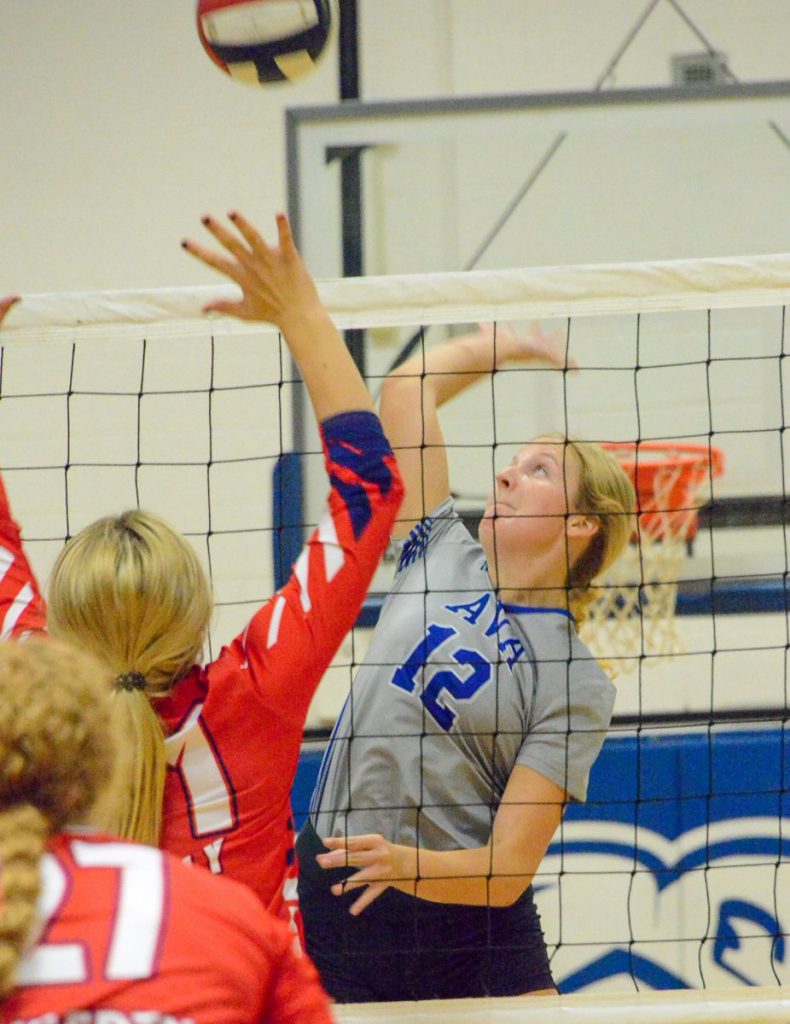 Ava has been under the pressure with match after match lined up with tournaments stuffed in between regular games.

In the most recent tour at Cabool the Lady Bears came out 3-2 overall dropping two matches to the host and SCA rival, the Lady Bulldogs of Texas County.

Blanked once and dropping the second set, 2-1, to Cabool was shadowed by 2-0 wins over Greenfield, Monett and Thayer High Schools.

The win over Thayer means both teams have tape on each other and will shootout for the W this next Thursday on the home court in Ava.

Because of a schedule swap between varsity and junior varsity programs, we only saw the 25-20 win on the third set for the varsity Lady Bears.

Fordland started with the first serve by Emma Trotter which ended with a kill from Ava’s Keeley Akers. She picked up the sere and sent it into the net to give Fordland the point tying it up at one.

Aubrey Huskey delivered an ace before passing the ball back to the Lady Bears after an unsuccessful kill attempt from Mikah Suter.

Lauren King picked up three points while serving before a kill attempt went out of play.

The Lady Eagles went on a small run, rallying for six points and the lead at 9-5. Their run was ended by a four-hit violation which Ava was unable to turn into more than one point before a pass went awry and into the net.

Lauren Hall was not in the Libero colors Monday, instead defensive specialist Samantha Keyes has taken the role. Hall played up front in the four spot.

Tuesday’s game result was a complete opposite of Monday evening with the Liberty (Mountain View) Lady Eagles sweeping the Lady Bears at home, 18-25, 17-25, and 16-25.

The Lady Bears started each set, 1-0, losing the lead within a few serves with hard hits from outside hitter Lexi Shumpert, opposite Kenzie Daniels, and mid Mackenzie Tomey in addition to ball handling errors made on their side of the net.

The First set awarded first point to Ava from a service error made by Shumpert. Addy Croston delivered her first serve and the rally point went to Ava with a stuffed block by Hannah Evans and Keeley Akers.

The Lady Bears then suffered a side out with a passing error. Luckily Evans came up for another solid block to put Ava up, 3-1. Another service error from Liberty kept the points flowing for Ava who now led 5-2.

It seemed a good start until Kenzie Daniels killed the play, forcing the side out and allowing rallies for six points which included three ball handling errors amongst the Lady Bears in addition to an Ace by Lyla Cornman.

Any time Ava got a hold of the serve, the team could not hold on for long and had momentum zapped from their sails as Liberty came into control of each set.

The Lady Bears were bested by dinks (soft tips over the net), kills, and aces with Liberty quickly pulling ahead 21-13 before a Lady Eagle passing error ended the onslaught.

An attack error by Kenzie Daniels helped bring Ava back into contention with the score leaning 21-15 for Liberty. A kill from mid Bre Daniels ended that roll and kills from Cornman put the Lady Eagles on their set point.

Finally, a tipped ball from Shumpert closed the first set with Liberty in command, 25-18.

The second set started in similar fashion with both teams keeping close to each other on the scoreboard.

Again, errors on the Lady Bears’ side of the line bolstered the Lady Eagles into a 9-5 lead and later an 18-11 lead. With the exceptions of stuffed blocks from Evans, Sara Mendel, and quick-thinking shots and tips by Mallory Melton, Ava was not able to keep spikes away from the 10-foot line nor their attacks inside the end line.

Another soft tip, this one from Shelby Acklin, hit the floor and ended the second set, 25-17, with the Lady Eagles now in command of the match.

Like the two sets before, Ava had the opportunity to gain traction on Liberty. Solid attacks and blocking from Baylan Alexander, Evans, and Mallory kept the Lady Bears alive trailing by just one.

Then Shumpert showed at the net with back-to-back kills before being answered by Melton with her own and the side out. Still, errors on the home side of the court let Ava fall behind 19-12.

Libero Lauren Hall made a diving save along with Samantha Keyes to keep a rally alive. Even with a tip from Mendel and kill from Melton the Lady Eagles reached match point with Ava watching the attack line where the ball struck maple.

The third set was ended by a more powerful move, a kill shot from Bre Daniels.

The last set ended, 25-16 for the Lady Eagles who swept Ava on their first home game since hosting New Covenant Academy on September 14.

Coach Bailey Loge was not available for comment on Tuesday’s game.

The Lady Bears are still in the black with a season record of 9-7-2, but now face a gauntlet of SCA schools – including another visit with Cabool – before season’s end.

The Lady Bears are on a tough schedule. Out of 46 sets played this season, 30 were played within the last ten days with little rest or time to regroup.

Ava is home for the next three matches starting with the hosting of the next SCA rival tonight, the Mountain Grove Lady Panthers.

The two schools are both in Class 3, District 10 and since Mountain Grove has not had any tournament play, they are 3-3 this season. According to the MSHSAA online team preview, both schools – on paper – are closely matched for tonight’s game.