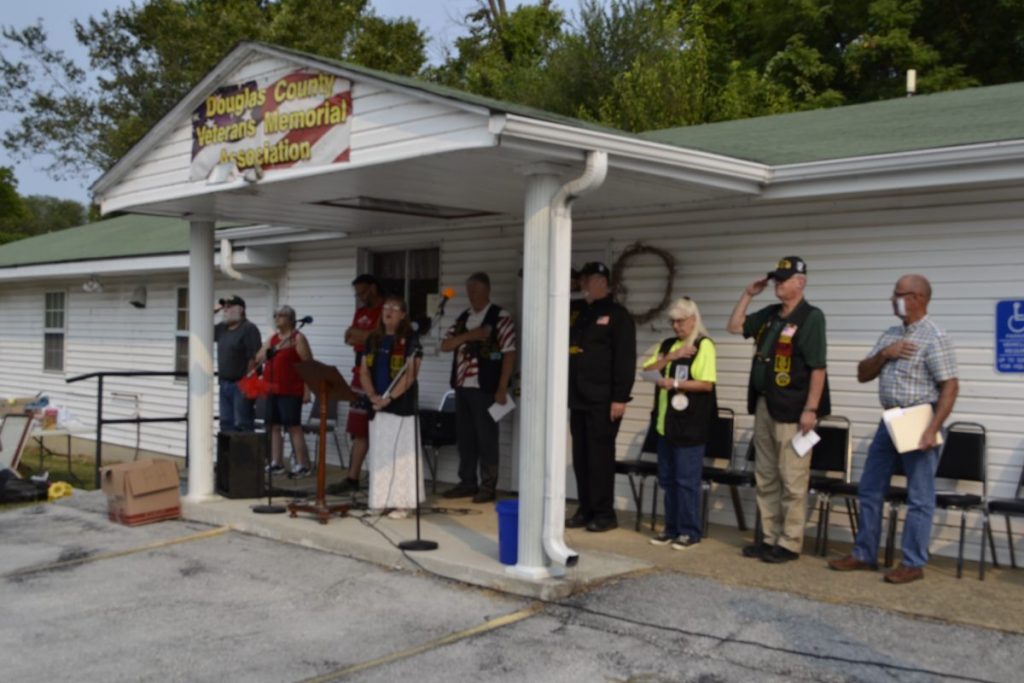 By Michelle Strubeck The Douglas County Veterans Memorial Association (DCVMA) held a remembrance ceremony on 9/11 to honor those that were lost and those that serve. First Responders received a special invitation and they and their families enjoyed a free meal afterwards. Nancy Crain of the DCVMA welcomed everyone and stated that the DCVMA is honored to have the privilege. Reverend Ron Pitzen, Chaplain gave the opening prayer and Mayor Burrely Loftin was the keynote speaker.

Mayor Loftin began by saying twenty years ago he was on his way to work when he heard about the first plane hitting the World Trade Center. When he arrived at work he heard about the plane that hit the Pentagon, followed by the plane crashing into a field in Pennsylvania.  He said this was the largest loss of life by a foreign force on American soil, not counting the lives lost in Afghanistan. Life in America was forever changed, which led to the development of Homeland Security, the TSA and the passing of the Patriot Act. Mayor Loftin went on to say that we have lost the innocence to travel anywhere or enter a building without restrictions, but we should focus on what we have gained since then. He said we have gained a deeper sense of patriotism, which is true in small town America, followed by a greater sense of nationalism, and we have gained a stronger sense of spirituality. Mayor Loftin closed by stating that he can’t say enough how much he truly appreciates the Veterans, State Troopers, County Sheriff’s Office, the City Police, firefighters and EMS for all they do for our community.

At the end of the ceremony members of the DCVMA passed out baggies that had a star and a card inside. The following information provided by Larry Morrison, DCVMA Events Coordinator, details the story behind the stars.

Each star is a star that came from a U.S. Flag that has been returned for retirement. Retirement means the flag is torn, worn, or tattered and should no longer be flown or displayed in its current condition. The flag is returned to the DVCMA for a proper retirement and disposal. There are several ways to dispose of a flag however burning is the preferred method.

Flags should always be treated with respect and honor because they represent those who worked, fought, and sacrificed their lives for our rights and freedom.  It also represents all of us, the hard-working people who make this country something to be proud of. In 1976 Congress amended the flag code to include the statement that the U.S. flag is a living entity and, as such, has all the rights thereof, including the right to exist and expire with dignity.  Although burning is the preferred method of retiring a flag, one must be careful if the flag is made of nylon, not to burn it.  The smoke will contain dangerous chemicals that could damage your lungs. A proper way to retire those flags is to bury them. To bury a flag, one should fold it in the proper ceremonial triangle manner, place it in a wooden box and bury it a few feet into the ground. Flags should never be thrown into the garbage. According to the Congressional Flag etiquette, it is ok to cut the blue field and stars out of the flag and distribute the stars with a card with it stating what it is and why it is being distributed.

With that approval in mind, the DCVMA has begun removing the blue field from retired flags.  Then they cut out the stars in a pentagon shape so the star and part of the blue field shows. The blue represents vigilance, perseverance, and justice.  The DCVMA only distributes stars that are stitched. They do not use the printed stars. Each star is different and is worn in different fashions, representing the different sacrifices the veterans have made.  Morrison went on to say, DCVMA has an agreement with a flag distribution company who will provide us with all the flags they have returned to them for retirement.

The card included with the star explains what is represents, and reads:  “I was part of our American Flag. I once flew proudly, high and free. Sadly time, sun and the elements have caused me to fade and become tattered and torn. I am no longer able to fly, but, you can carry me as a reminder of what I stand for, represent to the world, and the values we represent. Carry me with pride.”

The DCVMA does not intend to restrict distribution to just veterans. We want to include veterans, veteran’s spouses, families, relatives, friends, first responders, law enforcement and all community minded individuals who will display the star with pride and give it the honor and respect it deserves. The star can represent one veteran, or all veterans. It can represent a family, a community, a school, or an organization who believes in the constitution and the freedoms it represents and that the veterans who have fought and sacrificed so much to preserve.

DCVMA members will have the baggie with the star and card inside and will give it, free of charge, to anyone who wants it to preserve the memory of our veterans.

We plan on distributing thousands of stars over the next few months or years. If anyone has a flag they would like to retire, please bring it to the DVVMA facility, 402 West Washington (across from the Post Office) and we will utilize the stars and provide a proper retirement for the remaining part of the flag.

We Serve – Because We Care.