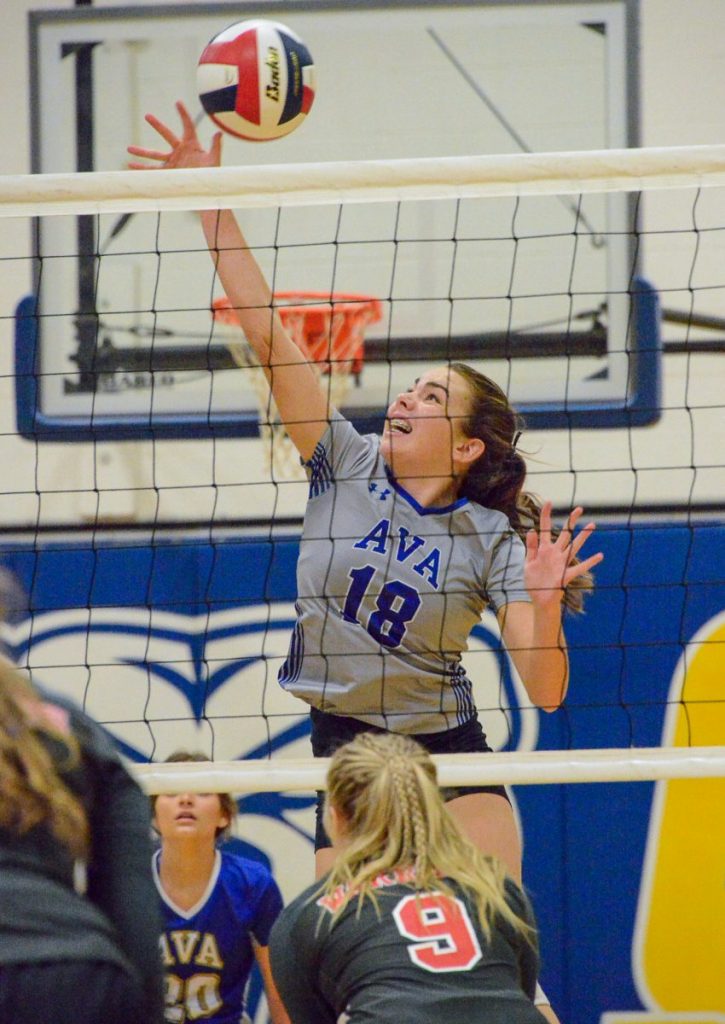 The Lady Bears had it going good last week with sweeps of Sparta, Hollister and Plato putting them at 4-1 this season.

“Plato was a little slow for us,” said coach Bailey Loge. “We, at times, seemed to not be playing at our best potential. A win is a win, but we were still able to learn something from that game even though we did sweep them.”

Then the annual tournament in Forsyth presented some tough competition, though.

In addition to the Lady Panthers, Ava had teams from Clever and Skyline to contend with. Ultimately the Lady Bears only brought home one win, against Sparta (2-0), with losses to Forsyth (0-2) and Skyline (0-2) as well as ties against Clever (1-1) and a different match against Skyline (1-1).

“The whole pool was very evenly matched,” said Loge. “We just didn’t show up with the energy we had that morning. It put a little wrench in our plans. We didn’t perform at our best and ended up taking those two losses at the end of the day.”

The Lady Bears have been on the maple and at the net for 17 sets just this past week. All things considered it appears that Ava can keep the pressure on the net, even when running on fumes.

“It’s definitely draining, mentally and physically,” said Loge. “When we do find the energy, it’s our goal to feed off of it and keep that control.”

At first it appeared the Lady Bears made a no-show on their own court, allowing the Lady Warriors four points as the rotation got their gears turning.

Hannah Evans and Baylan Alexander put up a brick wall to put Ava on the board. A missed pass from Lauren Hall would be the side out allowing the Lady Warriors to pull ahead again, 5-1.

As luck may have it, service from Meghan Auer went right into the net and Hall was at the line for three points with a tip and kill by Sara Mendel. New Covenant’s Hatty Hesemann attempted a kill which went out of play tying the game up at five.

Mendel came up big for the Lady Bears with another three kills, but the Lady Warriors were in control, leading the set 13-9.

New Covenant followed suit and allowed the Lady Bears to pull ahead, 16-13, before calling a time out to regroup.

“The rotations are really coming together,” said Loge. “Everyone seems to know what they need to do and that is helping, allowing us to filter in some younger players.”

The next volley a block kept the ball too close to the net to pass and Ava lost service.

From there it continued neck-and-neck before a sweep from Evans and a kill from Alexander helped propel Ava back up before allowing two more points the Lady Warriors who then led 23-21.

Lauren Hall squeezed in a serve to tie things up and Mendel put Ava at set point with a tip of the ball before the Lady Warriors fumbled their return closing the first set with a 26-24 loss.

From there a barrage of attacks and blocks by Alexander, Mendel and Mallory Melton sent Ava ahead by six points before an answer came from New Covenant. The Lady Bears studder-stepped allowing the game to get tied back up, this time at 15.

Things became dire after a set from Lexi Gastineau had no one to follow up putting the Lady Warriors back on top, 21-20. Even with two tips of the ball from Mendel, a block from Hesemann and Sophie Silvey stopped the Lady Bears, 25-22.

“I really wish we could have gotten that in three (sets),” said Loge.

With the New Covenant win extra sets were in the immediate future to determine the outcome of Tuesday’s match.

Ava was behind early in the third set but when Alexander was serving the ball, she notched three aces with big blocks and solid attacks from Mendel at the net putting Ava up, 13-8.

The Lady Bears kept adding points as the Lady Covenant team started to wear thin and lost steam. The Lady Bears went right on ahead with Mendel and Alexander in lead to end the third set with a 25-19 win for Ava.

But the energy seemed to be zapped out of the gym as both teams had an air of tension about them.

“This team is incredibly diverse when it comes to their personalities, not just their positions,” said Loge.

“It takes a lot to learn which player needs what. Tonight, after the third set I decided we needed to relax. We had expected to win (in three sets) but didn’t. I told them if they go out there work hard and have fun, the game is going to take care of itself. So, we joked a bit and lightened the mood. When I saw those smiles on their faces I said, alright, we’re about to come back.”

Hall served for a rally of five points in the fourth set putting Ava ahead, 7-4. Attacks from Alexander and Mendel along with four aces between Hall and Alexander propelled the Lady Bears ahead 13-7 before New Covenant made a short-spirited attempt to rally, still trailing by six as Ava continued to serve the ball.

Keeley Akers picked up an Ace and worked the net with Mendel and Evans making the set point, 24-15.

The Lady Bears stalled for a bit with a couple of bad passes and a return attempt which went right into the net.

The Lady Warriors couldn’t build up any energy, or momentum, and were finished off by Akers who killed the play, 25-18.

The Lady Bears are now 5-3-2 but must travel back to Forsyth this evening to face the Lady Panthers once again before having to keep pushing on into the annual tournament in Cabool on September 18.

“I’m excited to face Forsyth again,” said Loge. “I would have preferred some more time in between games. Four days is a short time in the volleyball world. We are going to look at the film, their defense, our defense, what worked, and how they attacked us. I think if we have a fresh mindset, we’ll have our energy.”