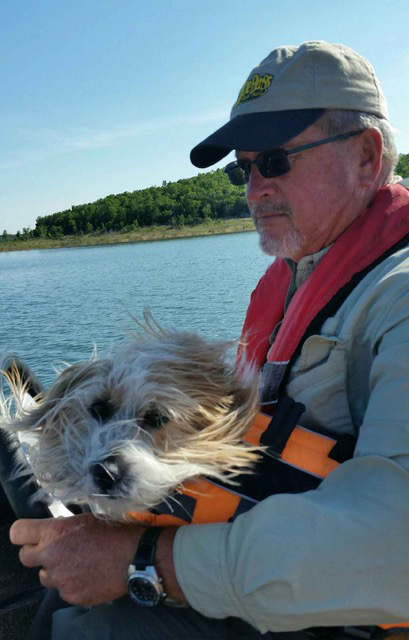 Joe Don Yeager was born during the midnight hour of August 21, 1951, in Quanah, Texas, completing the family of Robert Lewis and Vera Juanita (Hopper) Yeager.  He joined sister, Romayne, age 9 and brother, Warren, age 4.  Warren was so excited to have a brother that he wanted to name him after his pet parrot, Bimbo…thank goodness that did not work out.   Joe passed away on September 11, 2021 at the age of 70.

In January of 1983, Joe married the former Marla Collins of Ava, and become Dax’s father.  This new family welcomed a baby girl, Erin Kathleen in February 1985.  Joe enjoyed the simple things in life, however his greatest joy was his family.  Being a son, brother, husband, father and grandfather meant everything to Joe. He also loved his dogs – lots of dogs – including Ponch, Ellie, Levi, Buddy and Holly and Brodie, his beloved Lhasorgi.  Brodie adored Joe as much as Joe loved and spoiled him.  Brodie loved to ride with Joe on anything ….the lawnmower, his Silver Bullet side-by-side, the tractor, the Bass Cat and he really wanted to ride on the leaf blower, but Joe just couldn’t find a way.

Joe was wickedly smart, witty and funny.  He attended school in the Quanah Public School system where he skipped the first grade.  Not wanting Joe to know how smart he was, Warren convinced him that after one week in first grade he had flunked out, and since there was nothing less than first grade, they had to put him in second.  He went on to graduate from Quanah High School in 1968. That Fall, he entered Texas Tech University in Lubbock, TX where he was very active as a Texas Tech Saddle Tramp, and graduated in May of 1972 with a degree in Finance.  His summer job for 1970 and 71 was working as a section hand on the Quanah, Acme and Pacific Railway and after his college graduation he went to work as a trainman for the QA&P.  In July of 1973 he established seniority as a fireman on the St. Louis-San Francisco (Frisco) Railway at Enid, Oklahoma. Joe entered the Frisco Transportation Trainee Program in Springfield, MO in January, 1978. After thirty years of managing railroads all over the US, Joe retired and moved to Douglas County, MO. He and Marla bought land, built their dream home and joined the Ava Country Club. Joe bought new golf clubs and a Bass Cat fishing boat, and spent as many days as possible either fishing or playing golf with friends and enjoying his life to the fullest.

Joe’s legacy will be of a hard-working, honest man who fiercely loved his family. As he said, “I hit it exactly like I wanted to.” He will be deeply missed by his wife, Marla, his son and family, Dax, Cass and Hunter Riddle of Olathe, KS, his daughter and family, Erin, Ryan and Bronx Randle of Parker, CO, as well as his sister Romayne (Jim) Murrill and brother Warren (Jo Ann) Yeager of Lubbock, TX, and from Ava, sisters-in-law, Connie (George) Hetherington and Linda (Lendell) King,  brother-in-law Dennis (Linda Elliott) Collins and their families, plus numerous nieces and nephews and their families mostly located in Missouri and Texas.

Joe was a member of the Ava United Methodist Church and requested to be cremated, which is under the direction of Clinkingbeard Funeral Home in Ava.  Memorial services will be held in Lubbock, TX at a later date, and a celebration of life will be held on Thursday, September 16th, from 4-6pm at the Ava Country Club Clubhouse.  In lieu of flowers, donations may be made to St. Jude’s Children’s Research Hospital or to the Ava Country Club for a memorial project for Joe. Online condolences may be made to www.clinkingbeardfuneralhome.com.