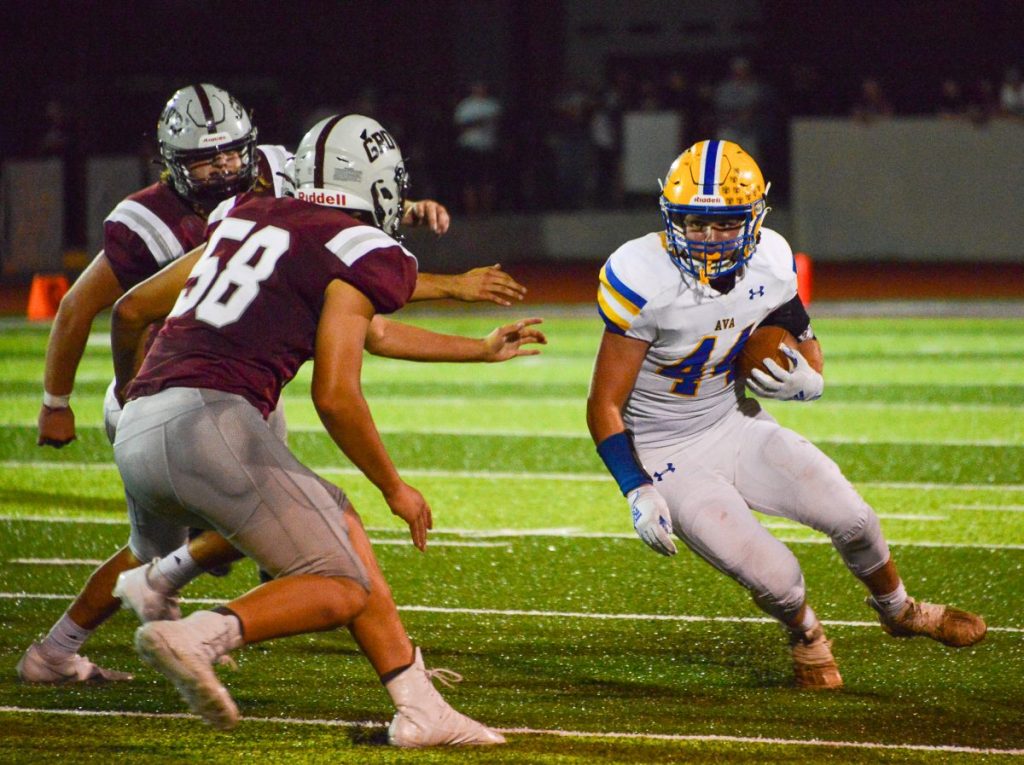 MOUNTAIN GROVE – One word to describe the 35-19 win on Friday.

Fence: /fens/ A barrier or other upright structure enclosing an area of ground to mark a boundary, control access, or prevent escape.

Fence, wall, barrier, blockade. You can choose your own verb. However, in football, the chant is “Let’s Go D-Fense.”

The highlight of this past Friday’s game against the Mountain Grove Panthers was witnessing the Ava defense hold them at the goal line and force a turnover on downs.

Friday was the defense’s night to shine and put practice into play.

“We just start every week doing the same thing,” said head coach Dan Swofford. “Just work hard and prepare for the next game one week at a time.”

The Bears are off a 45-0 win in Kansas last week. The 400-mile “adventure” has prepared the team for road games according to coach Dan Swofford. Not only did a game on artificial turf help prepare them for Mountain Grove but made travel a non-issue.

“They did great,” said Swofford. “This little trip over here is nothing when you take those kinds of trips. It was fun and a good adventure.”

The Panthers started the clock with possession and was able to muster up a passing touchdown even after junior quarterback Tyson Elliott was stopped cold by Ava defenders Kegan Evans and Jacob Lakey for a loss of ten yards on top of defensive back Evan Fleetwood getting through the line for back-to-back sacks.

Ava answered the call with a visit to the pay dirt to tie the game at seven with 5:31 left in the first quarter.

Ava quarterback Zach Richards opened with 55 yards on the first two snaps. Freshman Hunter Adams cleaned up the clap-back with a 19-yard dash to put Ava on the board.

On their own 34 the Panthers rushed Trenton Bevan through the trenches for a one-yard gain. Mountain Grove decided to get back to their airborne game which put them on the board earlier.

“They’re a good passing team,” said Swofford. “They got us early on. Those things just happen, and you hope to respond offensively to keep pressure on them. Our kids did a great job doing that.”

This is precisely when Richards was on d-back duty and was able to pick the toss to give Ava amazing field position on the Panther six.

Tapped in by Richards and Adams the Bears took a 14-7 lead with 3:21 left in the first.

The Panthers scrambled to put an offense together and what could have been a turnover punt became a fresh set of downs for Mountain Grove. A personal foul was called against an Ava player putting the ball up on the Panther 28.

Using the pass game as the Ava secondary studder stepped Elliott hit Jase Dowden for 38 yards and Drew Vaughan for another 46 and the ticket into the Ava endzone.

On the snap for the extra point the offensive line seemed to open wide for Ava’s Logan Elliott who was able to come in and block the attempt leaving Mountain Grove down by one, 14-13.

Ava opened the second with possession of the ball and trudged through a ten-play run down the gridiron starting at their own 46.

Big runs from Spencer Skyles and a handful of keepers by Richards kept moving the chains as the Bears ate up half of the second quarter.

Adams found the endzone on the second-and-goal at the two and put Ava up, 21-13.

The Panther’s next possession started them out on their own 38. Over nine snaps and four first-down conversions the Mountain Grove offense made their way to the Ava three-yard line where the Ava defense was put to the test.

Ava held firm and stopped the ground assault, but the Panthers can go by air and that was the plan for their quarterback.

Two throws were stopped and forced the game to a fourth-and-goal situation. Ava lucked out on a holding call against Richards which allowed the Panthers one more shot at the endzone.

Elliott rushed the ball on the keeper and was able to pick up two yards before he was stopped at the “fense.”

“The defense played awesome tonight,” said Swofford. “It was a difference in the game and the interception was another. It was great.”

The Bears took possession on the goal line and drew the offsides call to get out of safety territory.

A blow to the Mountain Grove offense offered fuel for Ava’s next possession where Skyles picked up 14 for the first down.

That is when Richards was able to slip through the Panther defense and clear the secondary for an 80-yard haul and touchdown. The proverbial final nail in the coffin for Mountain Grove.

With just over a minute left in the half the Panthers tried but the break was called in on them with a shoe-string tackle of Isiah Hellnusch by Ava defender Logan Elliott.

Out of the locker room the Ava offense was suddenly held in a stalemate during the third quarter. Even with 11 minutes of ball possession and an interception by Skyles, the Bears had to punt it away right after a failed field goal attempt from the Panther 21.

The Ava defense, however, did not take a break and put the Panthers in a deep fouth-and-thirty situation thanks to a devastating back field sack by Lakey and Brayde Koop.

Ava came out of the third with the ball in-hand and a winded Panther team which in-turn set Blayne Mendel up for quick 37-yard sprint up the middle for another six for the Bears.

After that the Bear’s offense didn’t come up with anymore points and allowed the defense to do their thing.

Skyles came in for his second interception of the game while Mendel played sharp downfield coverage to break up pass attempts to Hollen Glenn and Wes Drew.

Eventually the Panther came through with a late-game touchdown partly thanks to a facemask penalty called against Ava. A 36-yard pass completion to Bryce Stenzel and a 15-yard sprint by Ty Gardner allowed the Panthers another six points.

Even then, the extra point went outside the uprights leaving 3:29 left in regulation. Tempers started running hot on the field, Mountain Grove being an SCA and county-line rival, and officials were starting to intervene with players on the field.

“You don’t want to get in trouble where you can’t play next week,” said coach Swofford. “You’re trying to encourage them, speak positive, don’t add fuel to the fire, and just keep them calm.

The Panthers were unable to use the final 63 seconds to their advantage, capped off by victory chants from the visitor’s section of the stands.

The Bears averaged 6.71 yards per carry Friday night and rushed for 322 yards over 48 snaps. The Bears took advantage of fresh sets with an average of 9.1 yards per first-down snap.

The Bears are now 3-0 and are back on the road to take on the Liberty-Mountain View Eagles tomorrow. The Eagles are coming off a 42-28 loss to Thayer.

Even with a win over Ava last season, the Eagles are 1-2 this year.

“We just do what we do,” said Swofford. “We just do a great job, the coaches and the guys, of preparing for each week. We are going to do just that.”