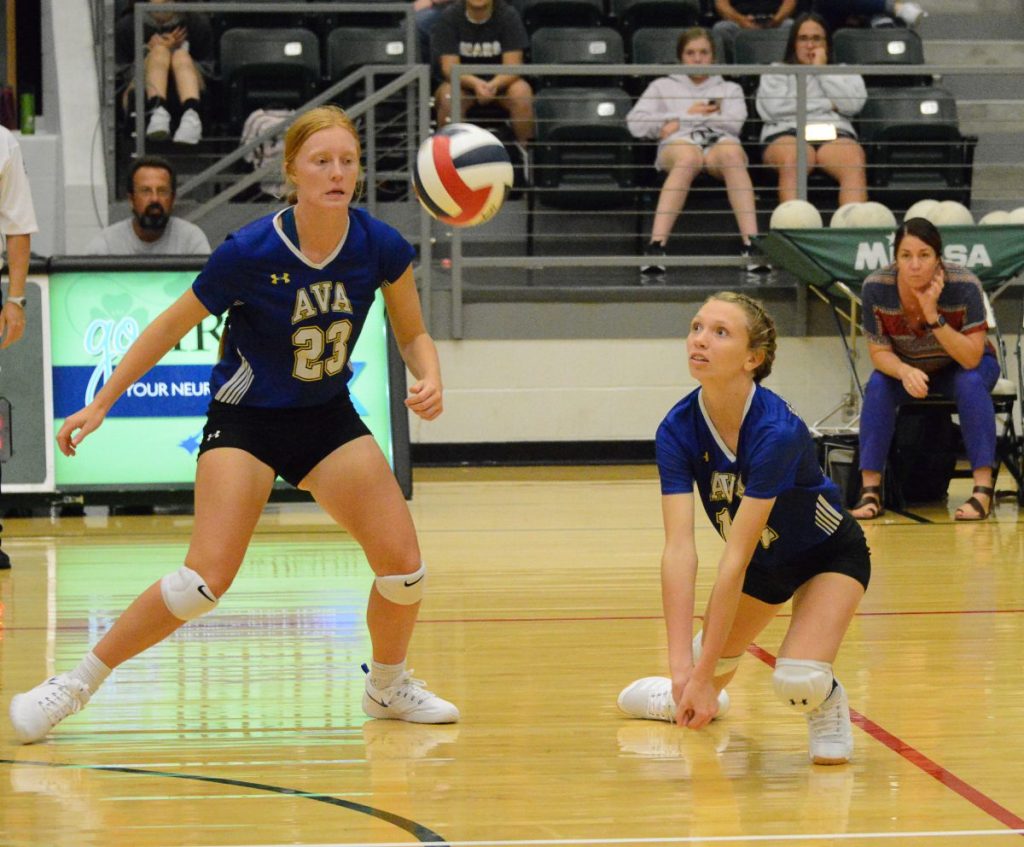 SPRINGFIELD – At the end of three sets the Ava Lady Bears were left with a goose egg following a 3-0 loss to the Lady Fighting Irish of Springfield Catholic High.

Outgunned by arms killing play the Lady Bears fell 9-25 in the first set. It started with a red card before the match even started.

Ava lost service and a point to the Lady Irish.

From then, miscues and unfortunate pass attempts plagued Ava as Springfield Catholic sprinted-off on a 7-0 run before Mallory Malton killed play and put the Lady Bears on the board.

Ava was able to muster a second point before Catholic took control of the set with an unpassable ace to Keeley Akers. A lift violation gave Ava another opportunity to rally but the Lady Bears went right back to defense when service from Samantha Keyes hit the net.

Returns out-of-bounds, flat hits under the net and missed attacks gave the Lady Irish a 15-3 lead until Baylan Alexander was able to make a successful kill. The Lady Bears went 7-15 with a sharp block by Hanna Evans and Alexander to put Ava at 15-7 behind Springfield.

To make matters worse, the Lady Bears lost junior setter Lexi Gastineau when she fell and collided with another player on a dig/save attempt. She was able to walk off the court but did not continue play for the remainder of the match.

Immediately following Gastineau’s exit the Lady Irish aced Ava with a serve from Hallie Cook which the Lady Bears watched hit the center of their court.

Poor communication sealed the first set as the ball hit the Maple as the Lady Bears passed in attempt to return the ball.

“We had to battle through sone adversity tonight,” said coach Bailey Loge. “With Lexi getting hurt and having a freshman step in, Paris (Henry) did great, but that will still throw-off the normal routine.”

Trailing 0-1 in the match the Lady Bears were able to score first in the second set with a kill from Alexander. Ava went over Catholic, 3-0, as their defense tipped the ball out of play and took a four-hit violation.

Soon enough, Cook ended the Lady Bears’ rally with a kill. Ava was called on a net violation followed by a return going out of bounds which knotted the set up at three.

“Springfield has some powerful kids,” said Loge. “They’re a solid team and we are a little fresh still.”

Ava was able to hold their own for some time, keeping the score close thanks to a service into the net by Catholic and a solid block by Zoey Strong and Sara Mendel.

A net violation against Springfield knotted things up at six, keeping Ava in play before the Lady Irish rallied with four points topped by a let serve which fell into Ava’s court.

The Lady Bears kept within three points before miscues and return errors pushed Catholic up and into a commanding, 15-10 lead. Service was given to Springfield’s Ava Walters who closed the match with an Ace, ending the second set 25-10 for the Lady Irish.

The third set was marred by kills and aces from the Springfield Catholic team who gave up only six points in the third and final set of the evening.

At first, a kill from Keeley Akers showed some sparks flying from Ava’s side of the net as the team continued to try and contend with the hard hits coming from the Lady Irish.

However, Catholic’s Cherie Sabini pushed the Lady Irish up, 8-4, with three service aces.

A barrage of kills and aces continued to stun the Lady Bears who picked up their sixth point from a service error stopping the opponent’s march, 23-6.

A kill and a return error later, the Lady Irish had set point and won the evening unscathed, 3-0.

“Seeing that was good for us,” said Loge. “We also need to show up as Ava no matter who we’re playing.”