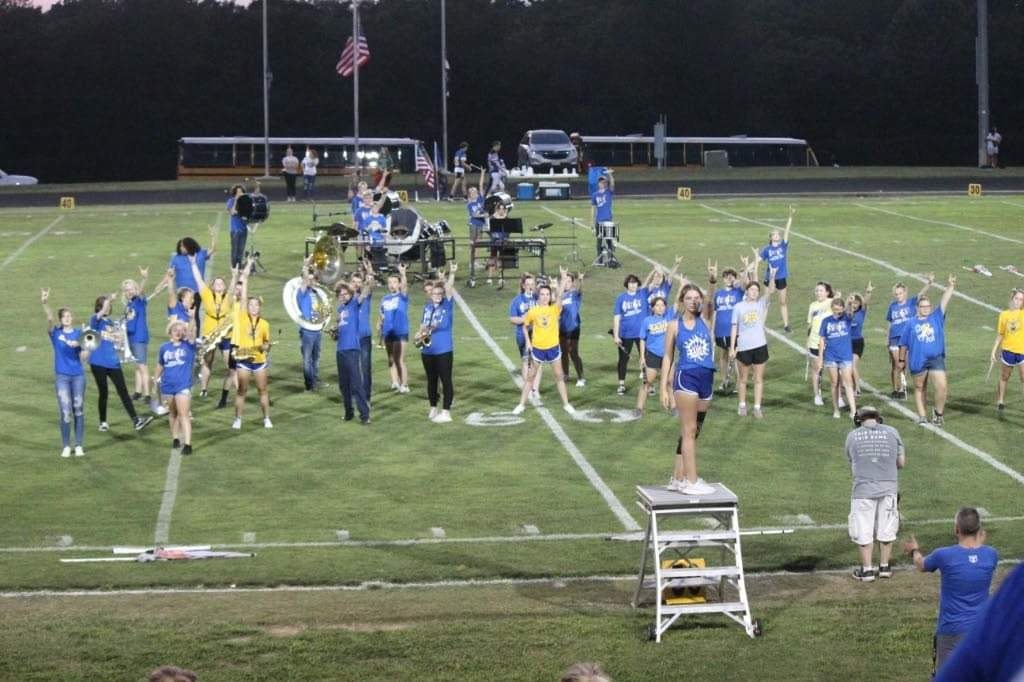 The Ava High School marching band and color guard performing at the first football game of the season.

By Michelle Strubeck For anyone that has ever been involved in music, they will tell you what an important role it has played in their life. Music allows for a creative outlet, there is the connection with the audience, and for some, they don’t know who they would be without music in their lives. Often times getting involved in music starts at a young age, while some develop an interest later in life.

For some music enthusiasts, marching band is the answer for them.  The Ava High School Marching Band has approximately fifty students that practice everyday during the first hour and they attend a two week summer camp with some early morning rehearsals when it comes closer to competitions.

There are several factors that go into coordinating a marching band. As Sarah Sacco, Ava High School Band Director stated, the student leaders are the bands secret sauce. For one week in June the student leaders attended a leadership training class where they apply their skills in leadership and discipline to each section of the marching band, then they divide and conquer. Each group has something specific to focus on. The more experienced students have the opportunity to develop their leadership skills by taking on positions such as section leaders, drum majors or equipment handlers.

Form, is obviously important for a marching band. Band members have to be cognisant of keeping their toes and heels together, stomachs in, chest out, shoulders back and chins up with pride. Sarah mentioned the band has a chant they do after their halftime shows to help them pay attention to areas of their bodies while keeping solid form.

When asked what makes for a good show Sarah replied it’s important to show that the students are having fun, while telling a story and making an emotional connection with the audience. The emotional connection is especially important to judges when performing at competitions. The more fun the band has, the more it projects.  Sarah went on to say that when the competition season ends, the band starts thinking of next year and in the spring time they start arranging their performance by searching the internet for ideas. The band tries to tell a story with each performance. This year the marching band is performing the music of Queen and the classical suite, The Planets. The bands performance is interactive and they encourage audience participation!

Of course their are challenges that come with being in marching band. Rachel Elliott, head drum major and Jansen Breshears, low section leader, stated that every instrument has its own set of challenges. Brass instruments are heavy, smaller instruments are harder to hear from a distance and its important to keep your shoulders to the front, making sure not to turn them away from the audience. The most important instrument in any marching band is the snare drum. It keeps the pulse and the tempo. If the snare drum isn’t accurate, the performance can fall apart.

Other challenges tend to be financial. Instruments and uniforms are expensive. Uniforms have a life cycle of ten to fifteen years, they wear down after time and they go out of style. They also have to make sure they have enough sizes for everyone. Right now the marching band is at their ten year mark with their uniforms and they are looking into different options that are more affordable.
The Ava Pride Band Boosters are an integral part of the music program. They hold fundraisers, there is a rummage sale and a silent auction at the Christmas concert. The booster club also awards scholarships to students continuing on in music. A couple of examples of how funds are used include food for the students at band camp, there is money that went towards the purchase of a trailer for competitions and community donations help out as well.

Marching band is also a big time commitment. Sarah mentioned that the staff is very supportive of students involved in any extracurricular activities, not making them feel like they have to choose one activity over another. They will find a way to make it work.

When it comes to competitions they are based on school size or band size. The bands are judged on their musical and marching abilities, color guard and overall execution. Placement trophies are awarded and some competitions give awards for outstanding drum major, color guard, percussion or solo, etc. The Ava Marching Band has three competitions scheduled: September 25th in Mt. Vernon, October 9th at Missouri State University and October 16th at Carthage High School. Aside from performing at the home football games, the marching band also performs in the Homecoming Parade and the Christmas Parade.

Both Rachel and Jansen agreed that marching band is about more than just the music. It’s the experiences and moments the band has together that make it so enjoyable. Rachel and Jansen went on to say the band is a tight knit group that cares about each other and they enjoy bus rides to competitions and joking around with one another. Other benefits include the physical aspect for obvious reasons, friendly competition, travel, time management, respect of self and others and hierarchy.

Sarah and her husband Chris Sacco, Ava Middle School Band Director, stated they enjoy the connection they have with their students, watching them grow before their eyes, getting to know their students as people, while making an impact on their lives with a special art form. Chris and Sarah attended Missouri State University and both have been teaching in Ava for fourteen years. Their jobs in Ava were their first jobs after graduating from college and they said they had hoped to gets jobs in the same district, and lucky for them, they did. Both Sarah and Chris have a passion for what they do and it shows.

If you would like to enjoy the talents of the marching band, be sure to attend any of the home football games and don’t forget, they like audience participation!