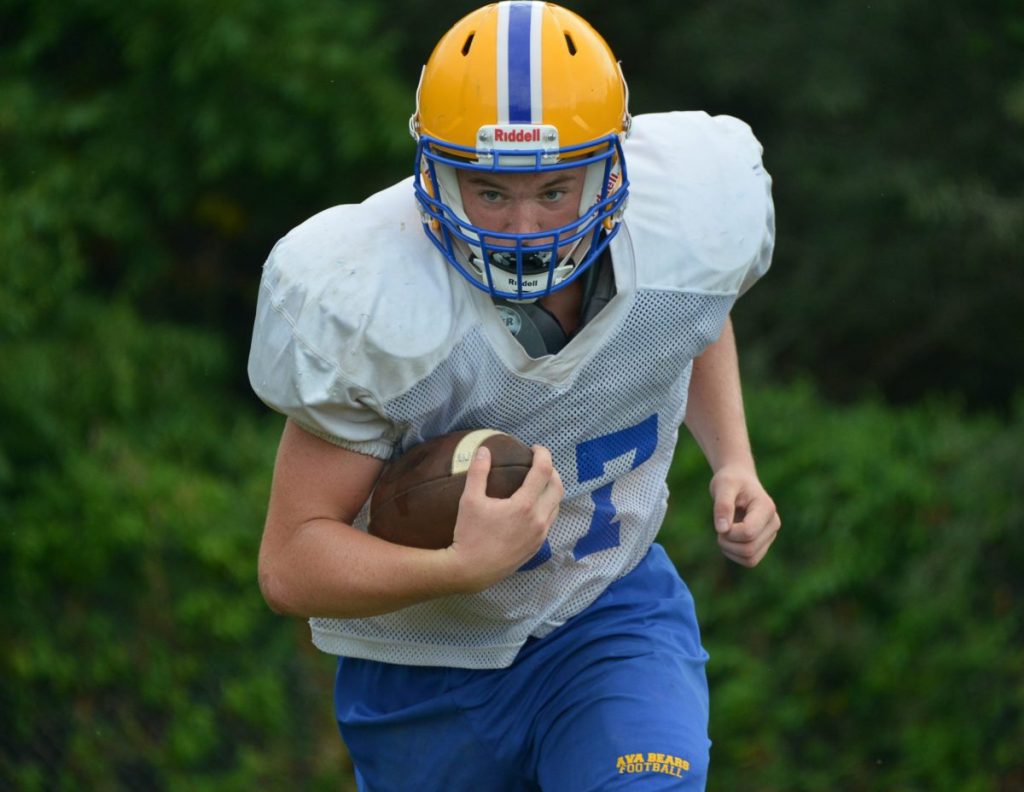 An Ava Football player charges down the turf while performing open-field tackles during a practice Tuesday, August 17, 2021, in Ava, Missouri. (Jason Hoekema/Freelance)

Approaching the practice field Tuesday, from a distance one could hear Head Coach Dan Swofford yell, “What is your job!?”
The statement is a staple in many coaches’ book of hard-hitting questions and challenges for their players, but in Ava it means more than just what the players leave on the turf.
“We aren’t just teaching them how to play football. We are teaching them how to be better students, better people, future fathers and community members,” said Swofford.
The idea of community comes to mind as each player has a role, even an ever changing one, to play as the opponent’s scheme is realized.
“Quarterback in the open,” replied one player when asked the question.
Since this writer last covered the Bears, the team marched through heat, freezing temperatures, and even cold mud (literally, versus Clark County in 2019).
One thing eluded foresight, athletic superstition, and crystal balls. A virus.
In 2020 the Bears did not fare as well with frequent injuries in addition to interruptions because of COVID. They ended the season at 5-5 overall and 4-3 in the South Central Association conference.
Between quarantines and injured players the Bears had to search the roster for hidden talent in its younger ranks.
“It made some kids who would not normally play as much, step up and learn the game,” said Swofford.
The Bears received some grace last year because the team did not have to sit out because of the virus.
“If you didn’t have to miss a game, that was a success,” said Swofford.
According to Swofford, this was the norm instead of the exception last year. Because of COVID the front-runner last season was up for debate. Which means this year’s crown is also up grabs. for any team who wants it enough.
“Anyone can take it. One week you can have a team who hasn’t lost, lose a game. Then have a team you wouldn’t have expected to win, win one,” said Swofford.
According to statistics obtained from MaxPreps, the Bears’ offense worked at a 38-percent completion rate in their passing game for a total of 390 yards during the 2020 season. They did connect for an average of 19.5 yards per toss resulting tin three trips to the endzone through the passing game.
The ground game rushed for a total of 2,522 yards averaging 5.1 yards per carry for a total of 26 visits to the pay dirt last year.
These numbers may not compare to the magical season put up by the team in 2019. Then again, 2020 was no normal year.
This year the Bears begin the gauntlet with a fight against Buffalo on home turf. The game at Silvey Field will be held August 27, at 7 P.M.
The remainder of the regular season includes:
9/3     v. Strafford    Home
9/10     v. Mtn. Grove    Away
9/17    v. Liberty     Away
9/24    v. Salem    Home
10/1    v. Houston    Away
10/8    v. Thayer    Home
10/15    v. Cabool    Home
10/22    v. Willow Sp.    Away
Coach Swofford invites the community to join in the Friday Night games as attendance helps support the athletes and quite possibly, the best ticket in town.
“You can go to a show in Branson or go to Springfield, but there is nothing like Ava Bear Football on a Friday night,” said Swofford.