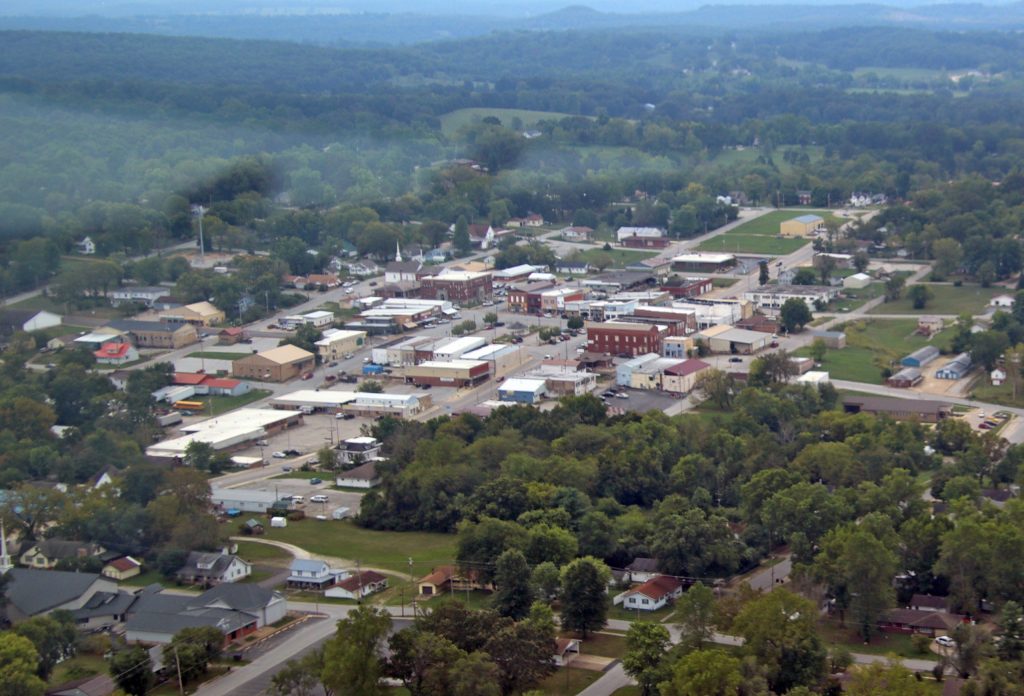 Doug Berger/Herald Downtown Ava as viewed from the air.

Editor’s note: Over the course of 28 days in 1985, Ava applied to be the site of a $44 Million, 1000-bed state prison. Residents favored the idea, the city sought land, applied to the state, but were rejected without comment. What follows are the series of articles from the Herald keeping local readers apprised of the situation.

Residents of Ava and the surrounding area are being polled this weekend to determine if this community would favor the establishment of a state prison here.

The opinion poll will start today and continue through the weekend, and results will be tabulated prior to a meeting that has been called for Tuesday night at Ava City Hall. That meeting will be open to the public, and is scheduled to begin at 7 p m.

Members of the Ava City Council, Ava Industrial Development Corporation, and Ava Area Chamber of Commerce met last Tuesday night to discuss the prison proposal and to organize some sort of a plan to pursue. All agree that the first step is to determine how the community feels about having a prison located here.

The council, chamber, and AIDC are remaining neutral on the issue, but are encouraging residents to express their feelings.

A set of ballots has been printed and will be available today for the public to respond. These ballots, or opinion forms, are available at all four banking institutions in Ava; Ava Drug and Rexall Drug; Town Country and Wallace Owens supermarkets; Davis Corner General Store and Village Mart; and at Spurlocks Store at Squires. Those marking the form only need to indicate if they do or do not favor the locating of a state prison here.

The steering committee that has been formed to work on the prison project wants to be thorough in its poll, but at the same time must move rapidly due to the early deadline for application, should it be determined that Ava does indeed wish to apply.

The city’s application must be postmarked no later than Oct. 18 to be considered.

Ava’s first contact on the prison proposal came just one week ago when Ava Mayor Bud Norman received a master plan of the project, and a survey form that is to be completed and returned if the community is interested.

The first called meeting was held last Tuesday night to form a steering committee and to set the community survey in motion.

Proposed by the state is a $44 million Missouri Western Correctional Center, a 1,000 bed minimum and medium security facility. This facility would employ more than 300 people.

Norman said that by 1988 the state plans to build two new prisons, two honor camps, and to expand halfway house services. Preferences for the prisons will be given to sites within fifty miles of major metropolitan areas, and Ava falls within that distance from Springfield, according to a map provided and marked by the Department of Correction.

Other guidelines state that the prison site will need a minimum of from 120 to 250 acres for such an institution must be fixated on a major highway, and have terrain that is level to gentle lolling hills.

Adequate utilities are also required, but Norman says that would pose no problems because the state is willing to drill its own deep well if necessary, and to establish its own sewer facilities.

The nearby Mercy Hospital at Mansfield, adequate motel accommodations, and local medical clinics, as well as good highway access on Highway 5, make Ava an attractive community for such a facility, Norman said. A large percentage of the employment staff would come from the local community for services such as maintenance personnel, food service, professional staff and correctional officers.

Fifty five percent of those who cast a ballot in the straw vote poll during the weekend here believe Ava should apply for a $44 million state prison that is to be built somewhere in the state within the next three years.

Ballots were placed in a number of businesses in the Ava area last Thursday morning and remained out until Tuesday afternoon when they were picked up and tallied.

At a public meeting held at City Hall Tuesday night the results were announced by Chamber of Commerce President Edwin Hailey.

The vote is certainly not overwhelming, nor is it taken as an absolute representation of the entire community. But the vote did serve its purpose giving the Chamber of Commerce and local officials some idea of how the community feels about having a prison located here.

With local officials operating on a limited time schedule, it is imperative that immediate action be taken to decide either to apply or to drop the issue. For that reason the Chamber of Commerce board of directors formally voted Tuesday to name the Ava City Council as the task force to follow up on the proposal.

Mayor Bud Norman said the first and foremost objective of the council will be to determine if land is available. The prison officials have requested 120 to 250 acres for such an institution, and Norman said if adequate land cannot be located then there is no need for the council to pursue the issue any further.

A committee of four, including Don Sallee, president of the Ava Industrial Development Corporation, Herman Davis, Ralph Bebout, and J.G. Heinlein has been appointed to search for an adequate location that would be available should Ava be accepted.

Ava only learned about two weeks ago that this area would be considered as a site for a new state prison, and Mayor Norman immediately began polling community industrial and business leaders to determine if Ava should apply.

The Ava Area Chamber of Commerce took the issue up at a special meeting on Oct 8 and at that time decided to poll the community to see what the reaction would be.

Tuesdays meeting was called at that time to review the findings and to determine the next move.

Of the some 30 to 35 individuals in attendance at the meeting Tuesday, four or five individuals spoke in firm opposition to the city’s having anything to do with a prison.

Cries of opposition were met with words of reassurance that an application by the city prior to the Oct 25 deadline does not mean immediate acceptance.

As one individual said “It’s not going to he like a mushroom. It won’t pop up overnight.”

It was also pointed out that as many as 300 communities may apply for the prison so there will be lots of competition for the project.

The original deadline for application was Oct 18 but that deadline was extended to Oct 25 to allow communities ample time to prepare their applications.

The Ava Area Chamber of Commerce and the AIDC earlier pledged their support to the prison proposal and recommended the community survey to get the opinion of area residents.  The weekend poll, although not decisive, does not show local support to’ the project, and it is expected the application will be completed and sent in if adequate real estate is located.

Headline: No New Developments In Prison Application; Deadline Is Friday

The application deadline is Friday, and as of Wednesday no meeting had been called of the city council to prepare that application for presentation to the state.

The Ava City Council has been designated the community representative to submit such an application.

Following a public meeting held Oct 15, a committee was appointed to search for a land site or sites that might be suitable for the prison. Ava Mayor Bud Norman said Wednesday that the committee has not officially reported back with any information regarding the application, although he said the committee does have some sites under consideration.

Norman said it will not take long to prepare the paperwork for the application if the council is called together and agrees to make application for the prison.

Members of the committee are Don Sallee, who is also president of the Ava Industrial Development Corporation (AIDC), Herman Davis, Ralph Bebout and J. G. Heinlein.

Ava was notified late Wednesday afternoon that the list of possible sites for the new $44 million state prison has been narrowed to six and Ava is not one of them.

Don Sallee, president of the Asa Industrial Development Corporation, said the individual who called from the Department of Corrections to make the report apologized for the fact that Ava was not being considered and gave no indication as to why this area was not selected.

The only southwest Missouri community still in the running is Mt Vernon. Other communities in the six finalists are Trenton, Cameron, Brookfield, Holden and Lexington.

Except for Mt Vernon all towns selected are in the northwest to northcentral part of the state. Trenton, with a population of 6811 according to the 1980 census is the largest of the six sites considered and Holden population 2195 is the smallest.

Editor’s note: It appears that Cameron was the winner of this contract, with the Western Missouri Correctional Center opening there in 1988.