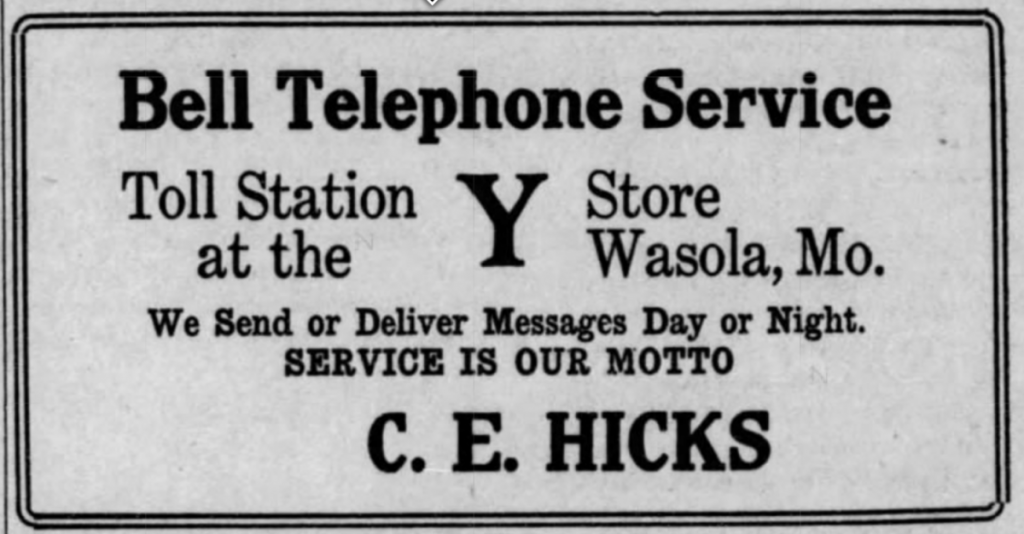 A 1929 advertisement for phone service at the Y Store.

Editor’s note: This two-part series was originally published in the Herald in February of 1989.

The articles cover the history of Wasola, Mo., located just south of the Douglas County line in Ozark County, on Highway 5. The history was compiled and submitted to the Herald for publication by J. Venue Hicks, of Springfield.

Sometime during the late spring or early summer of 1925, Roy Thompson and Edd McPherson built a store building about 100 yards west of the Wasola Post Office and on the north side of Highway 5. This was a good building and a good size and the only store in Wasola with a basement.

This building was stocked with a full stock of groceries and some hardware. This is also the first Wasola store that installed a set of upright gas pumps with a hand pump so you could pump the gas from the underground tank into a round 10-gallon glass bowl in the top part of the pump and the cars were served from there in the same means they are served today. These pumps were installed by Standard Oil Company. Osborn Daves of Ava was the wholesale distributor for this part of the country, and the gas was hauled out by tank truck and measured out in five gallon cans at the local gas station into the underground tanks.

The store basement was where they brought the farm produce such as eggs, cream and poultry, and it had an outside entrance. The farmers could drive up to this store and take his produce direct to the basement, see what his cream tested and weighed. When he found out how much money he would have to spend, he could climb the steps to the next floor, where he could visit with some of his neighbors and spend his money for his wants and needs.

I don’t think Mr. McPherson was in this business very long, but Roy continued to operate this store until November, 1926, when he sold the merchandise and building to Burney B. and Edith Herndon and they took possession of the store. The Herndons continued with the store and post office until January, 1936, when Mrs. Herndon got dissatisfied with the post office and asked the Department to get someone to take the office and move it out of their store.

So the Department asked the Ozark County Political Party Committee to recommend someone for the office. They recommended A.W. Pinckney, and he was appointed and moved the office into a building belonging to C.E. Hicks, which was set a few feet west of the Y Store, where Austin was operating a new and used furniture store at that time.

The Herndons were doing a good business in the store from the beginning they held what Roy had and began to add a few. From 1925 to 1928 Wasola only had this store and #1 store, but they had put Wasola on the map, and now both stores were getting business from other communities.

Up until then, all the farm trade around Wasola had gone into Squires, Noble, and Hilo. But now things were changing, and it was a beautiful sight on Missouri Saturday to see the wagons and pickups parked these Wasola stores.

The Herndons continued to operate the store until Burneys death in January, 1939. After that Mrs. Herndon ran the store for about a year, then sold the building and merchandise to her daughter and son in-law, Mr. and Mrs. Freeman Miller. The Millers operated the business until about 1950, when they sold the merchandise to Mr. and Mrs. Neil Snelson. The Snelsons operated the business until March, 1955, when they sold the goods to a man by the name of Roy.

Mr. Roy operated the store until late summer, when he decided to move the goods to another location. He was in the process of moving the merchandise the latter part of 1955, when the store building caught file and burned. So, Wasola lost another good store building and some groceries that were still in the building. This store stood about 30 years and had five different merchants, the building had three different owners, and the post office was in this building 10 years and had one Postmistress, Edith Herndon.

About 1926 John Fish, who had recently moved here from Kansas, put in a garage in the Milton Cates Grist Mill building and shed that joined the building. John was a good mechanic and did a lot of work. But, for some reason, this was not what he really wanted, so he closed the shop that fall.

Fred Hicks had constructed a metal building with a concrete floor about 200 feet west of where the Y Store now stands. I believe it was in the spring of 1927. Fred and Charles Elkins opened this building up for a garage and called it Sudden Service.

They operated this business through most of the spring and summer months. However, highway 5 being a new highway and only graveled in spots, carried very little traffic, and they had to depend too much on local trade. And, there just wasn’t that much local business at that time so, Wasola lost another garage.

In the summer of 1928, Clarence E. Hicks and wife, Viola, constructed a store building at the junction of 5 and 95 S. Highways – near the Y of two highways.  “The Y Store” opened it for business in September, 1928.

From the beginning Clarence determined to try to handle every line of merchandise that the trade wanted: and he kept in mind through all the years he was in business. This was before the REA Electric lines reached Wasola, so Clarence bought a Delco light plant and installed it in the side room of the store.

The next thing they demanded was ice. So he built an ice house and insulated all the walls and overhead ceiling and sent his truck to Forsyth for a truck load of ice. This was in large cakes from 200 to 300 lbs., each (maybe a few smaller), and was stored in the ice house, where a truck load of ice didn’t last very long. This is the only store in Wasola that I know of that sold ice.

In the clothing line, he had always carried piece goods by the bolt and most of the other stores did the same. But some of the trade wanted ready-made dresses. So Clarence built a small room adjacent to the store for that purpose. This store, together with their home, was completely destroyed by fire on Dec. 21, 1938.

In 1934 C.E. Hicks built a business building a few feet west of The Y Store, and he and Austin Pinckney stocked it with new and used furniture (mostly used). Austin was the operator of the store. He repaired all they bought that needed repairing, and later he repaired furniture and appliances for other people when he had the time to spare.

In January, 1936, Austin was appointed Postmaster of the Wasola Post Office. He moved the office into the furniture store, where he continued to operate the store and post office until February, 1937, when he bought a store building from Oral Snelson. He moved the post office into this building, and began to stock the new store with more groceries and other items that the public might buy.

With no one to operate the furniture store, Clarence soon closed it out. The post office was in this building one year with one postmaster.

In 1935 Oral Snelson built a store building about 300 yards west of the present site of the post office. He had a filling station in front and also handled feed and a small stock of groceries.

Austin W. Pinckney bought this building February 8, 1937. He moved the post office into this building and also began to build up a stock of groceries. He operated the store until his death March 26, 1965. His son Richard, and wife ran the store until Richards death in March, 1972. The store was then sold. This store is about 300 yards west of the post office, on the south side of old highway 5.

Later new Highway 5 was built south of the store building. This store building burned Dec. 10, 1975. It stood 40 years and had four owners.

The post office was at this building about 25 years and had two postmasters, Austin and Richard.

A short time after Austin Pinckney bought his store, he built a good garage building joining the store and equipped it with all the modern tools and equipment needed for a garage.

Richard Pinckney went to work in the garage, mainly to install the car parts sold in the store. But he began to learn more about the business and became a fairly good mechanic. He began getting lots of garage business from local people, and he kept a good business as long as he lived.

Richard was a great help to the community, and Wasola lost their best garage, when Richard passed on.

Clarence E. and Viola Hicks decided to build another store building in place of the one that burned in December, 1938 and built this one with rocks. As soon as he could get enough rock to start on, he hired a stonemason in Arkansas, and they began to build. It was finished, stocked and opened for business in May, 1939.

There were some things in the other store that he had to leave out of this one one of these things was the icehouse. However, several new lines were added to this store that no other Wasola store has ever had. A new light plant was a must – until the R.E.A. got their line to Wasola.

He installed a new large refrigerated showcase, used to display all kinds of fresh and cured meats. In the back of the store, he put in a large walk-in cooler, where he hung halves and quarters of both beef and pork. A butchers block was just outside by the coolers door. All of this made almost a complete butchers shop.

He put a lunch counter next to the meat showcase and a gas cook stove behind the counter. He served lots of meals behind that counter. He sold a lot of meat both fresh and cured. So, that part of the store was a combined restaurant and butcher shop. They enjoyed lots of business, from the time this store was built until Clarence lost his health and had to quit. Viola could not handle it all alone. So they sold the store and all the land on the south side of the highway to Theta Hodges, and he sold to Auda Ware in 1969.

While Mr. Ware owned The Y Store, he built a building just west of the store and put in a laundry mat. He operated it a while along with the store, then it was converted into a second-hand shop. I believe the building is empty now.

Mr. Ware operated the store and the other business for a year or longer. Then he sold it all to his mother, who with her husband, Loren Cook still operate The Y Store. This is the last store built in Wasola and the only one still standing. Also, it is the only store in Wasola that never had a post office. This store, together with the other six has been a great help to all the Wasola community. They have served their purpose in making this part of the country a great place to live. 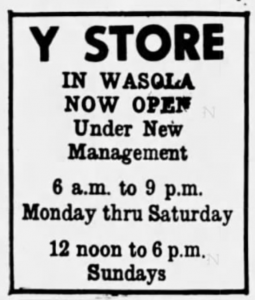 In 1970 the Y Store was under new management. 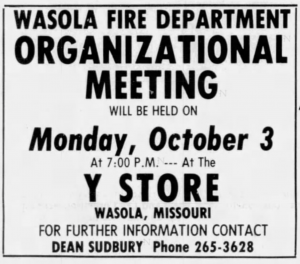 In 1983 the Wasola Fire Department was organized at the Y Store. 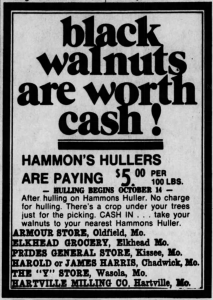 In 1973 you could bring Black Walnuts to sell at the Y Store.