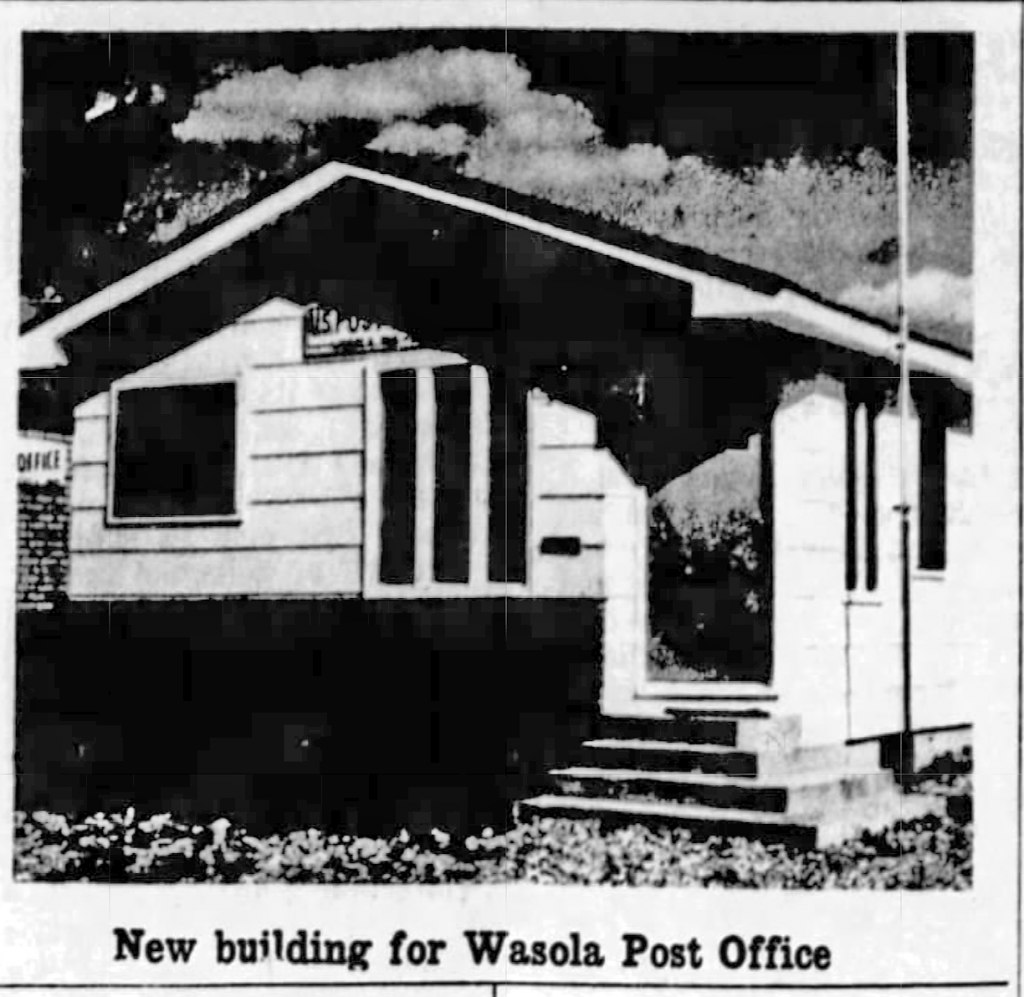 Editor’s note: This two-part series was originally published in the Herald in February of 1989.

The articles cover the history of Wasola, Mo., located just south of the Douglas County line in Ozark County, on Highway 5. The history was compiled and submitted to the Herald for publication by J. Venue Hicks, of Springfield.

The community of what later became Wasola, Mo., was made – happy in November, 1912, because on this date John Wesley Thompson started the first store on the site where the Wasola Post Office now stands (which is on a part of the W.H. Grant farm John Wesley bought) and is now owned by Mrs. Ora Lee Leschinsky.

The first stock of merchandise for this new store was bought from Claude Holand who had operated a successful business at Hilo, Mo., since before the turn of the century and was moving to another state.

Just a few months after the store was opened we began to hear, “We need a post office,” to which all agreed. Nothing seemed to be in the way so someone said, What are we going to name the office or town? The name Wasola was suggested by more than one person. Some thought Hobert Thompson was the first one. Hobert had been working in Springfield and liked the name of one of its streets called Wasola. However, Springfield never had a street named Wasola; but from 1903 to 1925, it had a part of what is now Prospct Avenue named Wasoola. That is the nearest it ever came to Wasola. (Also, I was unable to learn how Wasoola was pronounced.)

Thus, the new post office was established and open for business on December 26, 1914 much to the pride of the entire community.

John Snelson was the Postmaster; and, his daughter, Mamie ran the office. They got the mail from Silverton by a horseback route that went from Wasola in the afternoon for Silverton and started back to Wasola soon after the Ava to Almartha mail got to Silverton with the Wasola mail. This route was run six days a week. John McDaniel got the first contract to run this route. But, until the contract was let, Austin Bloomer was hired to run the route.

In early 1913, Mr. Thompson’s son, Hobert, came home and went to work in the store. He soon added a few things to attract the attention of the teenagers that his dad had never had, I will mention only one, because it was one item never seen in any other store in Wasola, I don’t know its name; but it was a cheese counter display case. The bottom plate that held the cheese could be glass or metal, with a solid stem or bolt coining up from the center the base of the cheese knife being hollow fit over the stem, and was made solid by screwing down a nut on the thread on top of the center bolt. The knife would hinge at the base so you raise the knife above the cheese and set it where you wanted the next slice. The whole cheese case was covered with a large glass cover that fit down over the whole thing and left it clean and dust free. With cheese bought from this case, you got all the crackers you could eat free (they sat by the counter).

On Jan. 2, 1915, J.W. Thompson sold the store and merchandise with five acres of land to H.B. Prock But no change was made with the post John Snelson office, continued as Postmaster and Mamie continued to operate the office as she had always done until Oct. 21, 1916 when H.B. Prock sold the store with one acre of land to William Thomas and Grace Yount.

Mr. W.T. Yount became Postmaster soon after he took over the store, and he continued to operate the store and post office as long as he owned the store. This was still a one store town and had not yet gotten what trade or local business that belonged to Wasola. And, seemingly Mr. Yount was not gaining any business. So when he sold the store to Milton Cates and wife and Newton Epps and wife on Nov. 28, 1917 (and Milton was appointed Postmaster), we had hopes in Milton getting what business that should belong to Wasola. But some way this partnership didn’t work out, and the business dropped off more yet and Wasola was hardly on the map.

On Feb. 7, 1920 Milton bought all the Epps interest in the store and began to handle it himself, increase the inventory of the merchandise and add some new lines that the farmers around there were in need of. He also put in a grist mill across the road west of the store, hired some help and started buying the farmers’ produce of eggs, cream and poultry. In just a short time he was doing more business than that store had ever done; and enjoyed that kind of business for a few years.

The first part of 1924, Milton became very much dissatisfied with the post office business and asked the inspector to get someone to take the office and get it out of his store. The inspector went to Mr. Kimbal, and he said he would take the office as soon as he could fix a place in his store to put it. So, Mr. Enloe said he would keep it that long, but he didn’t want it any longer so they moved the post office into Enloe’s store for two or three weeks, then it was moved on to Mr. Kimbals store. All Mr. Enloe had to do was clean off shelves in one corner of his store and set some empty boxes along on those shelves to hold the mail, and he was ready for the office.

Milton enjoyed a good business up to the day the store was completely destroyed by fire on July 27, 1936. A large stock of merchandise went up in smoke, and Wasola its first good store. This store stood and served the people 23 1/2 years and had five owners. The post office was in this building 9 1/2 years and had three different postmasters.

This being the first store and having had a leading part in getting the post office, the people of Wasola community owe all that had anything to do with building or operating this business and/or post office a debt they can never pay. But, they can and will say, “We thank you from our heart and we will never forget what you have done for this community.

The beginning and end of Store 1 in Wasola, and also the beginning of a great post office. But not the end, for it was just then coming into its own and we have a postmistress which we are all proud of. So, Ora Lee, it is yours to take from here. We still expect great things from Wasola. So think big, Wasola people, Think big”.

About 1918 or 1919. Virgil Porter built a pole building with a roof and dirt floor for a tomato canning factory located just a few feet west of where Pinckney’s Store later stood; and over on the north side of Highway 5 (the exact spot where C.E. Hicks later built a house which he leased to Mrs. Weeks, where she lived until she died in 1944).

Mr. Porter had contracted several growers around Wasola to grow tomatoes for him that year; and the crop was only average that year. He bought the first picking and canned a part of that. However, this was before the hand capper was invented, so all Porter had to seal the cans with was soldering irons and that method was far too slow and expensive for that size operation. So he said he was broke, threw up his hands and walked out. Wasola lost their factory. I don t remember what the growers did with their fields of ripe tomatoes.

The second store opened for business in early 1921 on land Mr. Kimbal had bought in February 1920, located almost 4 miles south of the present post office. Mr. Kimbal had operated a store in Almartha through 1920; so after he moved to Wasola, he decided to build a store building and move his merchandise to Wasola.

This store was the first one in Wasola that sold gas for cars. He kept it in a 50 gallon kerosene barrel and pumped it out with a hand pump into a half gallon can, and it was carried from the front store porch to the car and put in the Model T tank under the front seat.

This store kept a fair stock of groceries and other items that most farmers around Wasola used. So the Kimbals enjoyed a fairly good business all the time they operated the store through 1921 and to November, 1926 when he sold the store to Burney and Edith Herndon. And they moved it into the Roy Thompson building Herndon had just bought from Roy, and the post office was also moved into the same building, and Edith Herndon was appointed Postmaster. The post office was in this store 2 1/2 years and had only one postmaster.

This store operated about six years and had only one owner.

In the early spring of 1921, the H.B. Prock family started a family style restaurant in their home located where the Y Store now stands and operated this business through 1921 and 1922 for 10 cents per meal per person.

The grade for old Highway 5 was made down to the county line in 1921 and came on through Wasola in 1922. So much of the Prock’s restaurant business were those that worked on the highway. This was a small charge for a meal even at that time, but some jobs even on the new highway were low-paying jobs even for that time. So you see those days were hard times and low prices and money was hard to come by.

During the summer of 1922, A.C. Enloe opened for business a small grocery store located about 200 yards west of the Wasola Post Office.

This store never carried a large stock of merchandise and got the least amount of business. This was the only store that didn’t handle the farmer’s business. But Enloe was not prepared for that much or that type of work. Mr. Enloe closed out his business in the summer of 1924. So this store was operated about two years with one owner and housed the post office about two or three weeks with one postmaster. (To be continued). 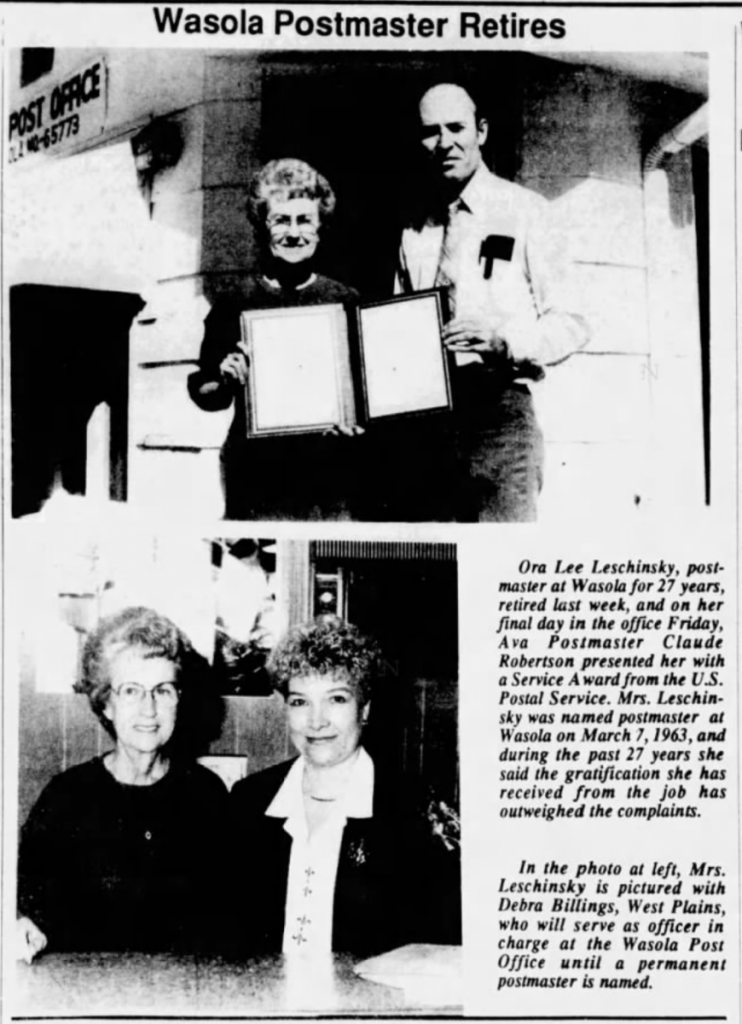