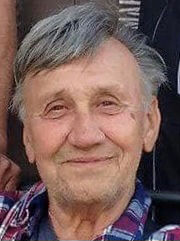 Clifford Leroy Shafer, 74 years, passed peacefully on July 6, 2021 at his home with his family by his side.

Cliff was born August 18, 1946 in Plattsmouth, Nebraska to Bob and Ann (Bax) Shafer.

Cliff was a U.S. Marine and served during the Vietnam War.

On September 9, 1967 Cliff and Patsy Lou Scott were united in marriage at Louisville, NE. He was a member of the VFW in Plattsmouth, NE. He was retired from working as a Welder at National Crane in Waverly, NE. He enjoyed motorcycles, his dogs and most of all being with his family.

He was preceded in death by his parents, his wife, Pat, a brother, Rob Shafer, and a sister, Charlene Gray.

Cliff is survived by his brother, Arthur Shafer, his sister in law, Mary Ann Boyer, brother in law, Bobbie Scott, many nieces, nephews, other relatives and many friends.

Cremation services for Cliff are being conducted by Clinkingbeard Funeral Home, Ava, MO per his request. The family will be celebrating Cliff’s life at a later date. Online condolences may be made to www.clinkingbeardfuneralhome.com.