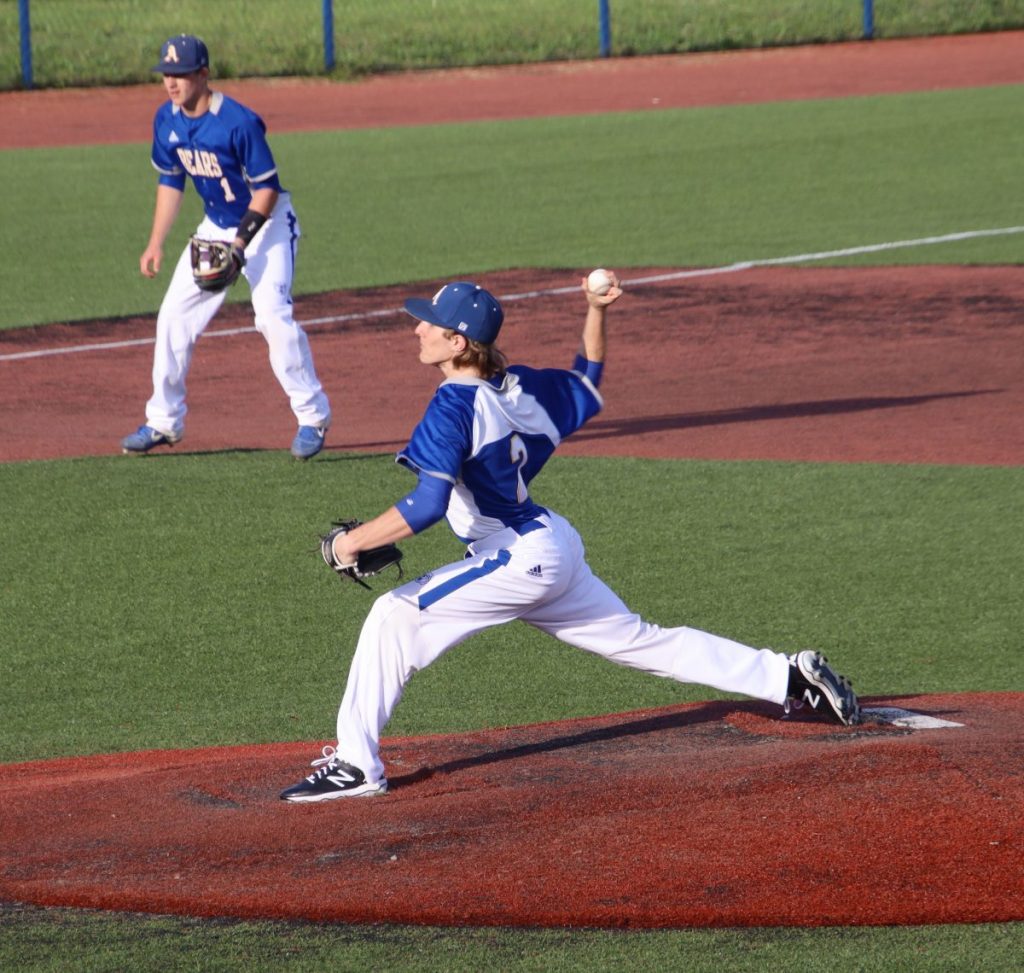 On a rain-soaked field last Wednesday afternoon, the Ava Bears made a run at Springfield Catholic in the final inning of the Class 4 District 10 Tournament championship. The Bears couldn’t make up the full four run deficit, and fell 7-6.

In a game where the pitchers had a tough time getting a secure grip on the ball, there were few hits by either team early in the game. Twenty-one hitters were either walked or hit by a pitch in the game.

The Irish added their third run in the fourth, again without putting a hit on the scoreboard. Two walks and an error had loaded the bases, before a sacrifice fly brought in the run.

The Bears got on the scoreboard in the top of the sixth when Corey Heinlein would reach on an error and Spencer Skyles was hit by a pitch. Zack Miller would walk to load the bases. Andrew Dalton doubled down the right field line scoring two runners. Miller would come home on a passed ball to tie the game.

Reece Adams led off the seventh inning for the Bears with a single. The Bears were down to their final out following a fielder’s choice and strikeout. Heinlein walked and Skyles launched a line drive over the left field fence to pull the Bears within one. A ground out ended the Ava rally.

The Bears had out hit Springfield, four to two, including two extra base hits. But the Irish had ten more walks, 13-3. Four Springfield Catholic players were also hit by pitches. The Bears left just three runners on base, compared to 12 for Springfield.

Three Bears pitchers went to the mound. Dalton opened the game and went two innings. Bryse Dodson came on and threw the next three innings with Creighton Regennitter finishing up.

The Bears had advanced to the championship matchup, by topping number two seed Logan-Rogersville in a game the previous evening.

The contest proved to be another one run game with Ava coming away with a 3-2 win.

Richard went the complete seven innings on the mound for the Bears. He struck out nine and gave up four hits.

The first scoring in the game came in the top of the fourth. With one out Miller and Dalton singled. An error allowed Zach Mendel to reach and a run to score. A fielder’s choice allowed the second Bear run to come across the plate.

Logan-Rogersville came back in the bottom of the fifth to tie the game. Two Wildcat runners would reach on a single and hit by a pitch. A triple would bring them home.

The Bears went back on top in the seventh when Adams singled and was moved up to second on a sacrifice bunt. Payton Evans would follow with a single bringing home what would prove to be the winning run.

The Wildcats hit a couple of balls hard in the final inning. Richards caught a line shot back at the pitcher to open the inning. He would hit the next batter, but a pop out had Logan-Rogersville with just one remaining out. Bears left fielder Evans ran down a line drive to give the Bears the victory.

The Bears finish off the season with a 16-6 record.