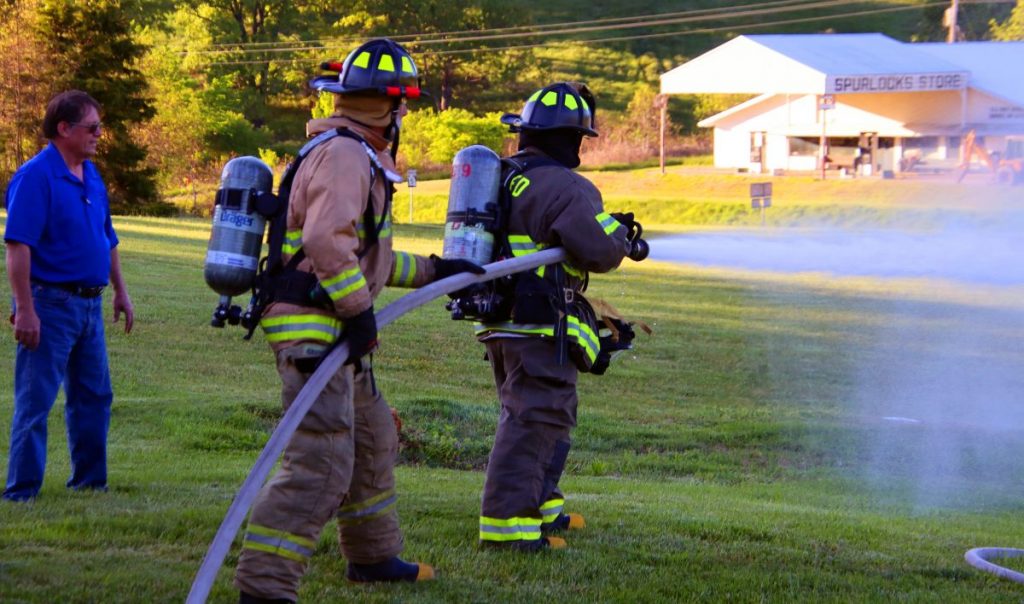 Doug Berger/Herald Hose work was part of the skills instruction at a recent training session at the Squires Volunteer Fire Department.

As part of the grant, the department also received funding for 10 self-contained breathing apparatus.

“The grant was a huge thing for us, because those packs (breathing apparatus) are about $5,000 to $8,000 each and that’s outside the budget we work with. So that came out to about $70,000 and then they granted us another $20,000 for training and what we asked for was Firefighter 1 and 2, which is the standard for a city fire department,” Squires Fire Chief Travis Veldkamp stated.

Veldkamp explained with getting the air packs they wanted to make sure everybody was competent with them and completely safe and it was effective for the community.

When it comes time for the live burn training, the University Fire and Rescue Training Institute will send equipment and instructors to conduct that training, Veldkamp stated.

“Typically training for Firefighter one and two would be six months. We are condensing this as much as we can. This is a blended class, so when we show up it’s just for skills. During the week everybody is responsible for reading the chapter, watching videos and then taking quizzes and tests. We’re going to end up with the bulk of this done in probably five months,” he said.

The Squires fire department has 19 volunteer firefighters with nine taking the class.

The classes are held Tuesday and Thursday evenings from 6 to 10 p.m. Depending on how complex the skills are they are working on the evening classes can involve between two and four skills. The classes will also meet one or two weekends a month on Saturdays and the classes go from 8 a.m. to 5 p.m.

“It’s a full day of really packing in a lot of skills,” Veldkamp said.

Very few of the firefighters in the Squires department had firefighter 1 and 2 training.

“We’re really blessed to get this opportunity. It’s not just every day that it’s available and close. It’s pretty usual to have to drive an hour or two or three to a class, which you can imagine gets pretty difficult with the expense of that. None of us get paid anything for it, so it just comes out of your pocket,” Veldkamp indicated.

“For this training to be here in Douglas County it’s really a big deal and we’re really grateful, not only for the funding that we got, but also such a huge help Shane has been to make this happen,” Veldkamp indicated.

“The greatest thing about this class is that it covers in such depth all of what we really need to be effective and to stay safe. And for me, as chief, the safety aspect is one of the things I worry the most about. I don’t want any of my firefighters in danger. I feel like that maybe is the biggest thing we gain a lot of comfort and familiarity with the equipment and understanding of how fire works and how building construction works, which allows us to be more effective and safe. We always talk about if we’re unsafe we just made a bad situation worse and now we have two problems to deal with,” he stated.

“We’re getting close to having gone through all our skills, so we have our live burns, which puts us inside of a trailer from the University where we actually get to attack a live fire and put all the skills to test,” Veldkamp stated.

The training sessions conducted by University personnel will include a session with interior structure firefighting, another for exterior fire fighting including car fires, and a session involving vehicle extraction.

The Squires Fire Department, which was created in 1982, covers about 100 square miles. 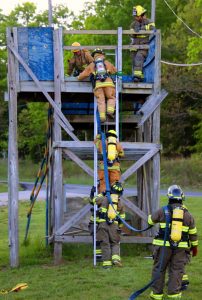 Doug Berger/Herald The Squires Volunteer Fire Department has been host to Firefighter 1 and 2 training including this ladder instruction.