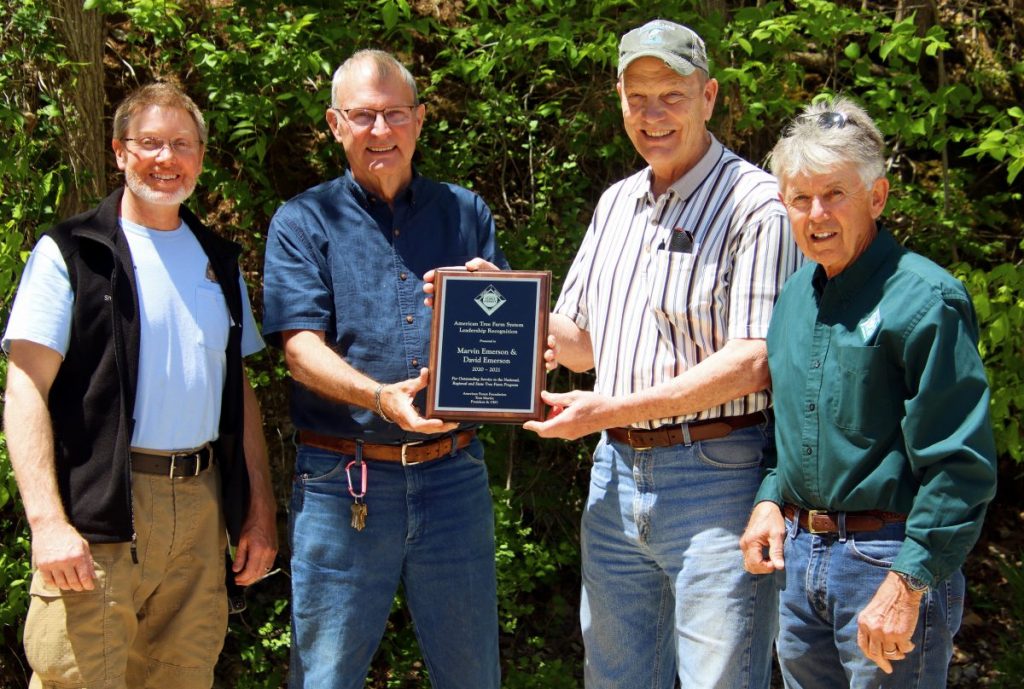 Doug Berger/Herald A Douglas County tree farm was recognized by The American Tree Farm System (ATFS) with the Missouri Tree Farm of the Year award. Receiving the award were Marvin and David Emerson. Pictured at the presentation were (from left) Missouri Department of Conservation Forester Shane Rice, David Emerson, Marvin Emerson and Rick Merritt, chairman of the ATFS Missouri State Tree Farm Committee.

The American Tree Farm System is a program sponsored nationally by the American Forest Foundation, a non-profit organization promoting the sustainable management of forests through education and outreach to private forest landowners. The American Tree Farm System defines a tree farm as a privately owned forest managed for wood, water, wildlife and recreation, where the tree farmers manage their forestland for pride, profit and pleasure.

The Emersons manage the tree farm along with Crystal Lake Fisheries. The fish farming business has been operating at the location since 1951, when the Emersons’ parents, Dwight M. and Mary Alice Emerson, established the operation of the trout farm. The farm originally began with 30 acres and has since grown to over 2,000 acres, according to the Crystal Lake Fisheries website. Crystal Lake Fisheries supplies live rainbow trout to locations up to 1,200 miles away in a multi-state area. They spawn, hatch and raise their own registered strain of rainbow trout in waters supplied by a spring producing a daily flow of approximately 10 million gallons.

Just over 20 years ago, the Emersons decided to contact the local Missouri Department of Conservation (MDC) forester to see if they could better manage their forest lands.

“I knew we were doing it wrong, but we didn’t know how to do it right. It was a process. It took several years, but we finally figured out there’s a program at MDC were they would kind of help teach you to do this,” Marvin Emerson stated.

Contact was made with MDC Forester Shane Rice, who developed the original management plan and has assisted them with its implementation for the forest lands. These management efforts were among the criteria considered by the ATFS State Tree Farm Committee in the selection of the property for the award.

“The award was made for the 2,943 acre tree farm in Douglas County, and recognizes their forestry accomplishments since 2001. The Emersons implemented management recommendations from the Forest Stewardship Plan provided by the Missouri Department of Conservation. This includes managing the forest, wildlife, soils and water resources to their maximum potential and productivity, providing a mix of habitat for wildlife and managing high-value hardwoods. The Emersons have been a Tree Farm since 2003 and received the Regional Tree Farm award in 2010,” Rice indicated.

Rick Merritt, chairman of the ATFS State Tree Farm Committee, added that along with the Emersons forest management efforts, the Committee also recognized their community involvement, input to the organization, and he added that it was always impressive if an award recipient was a family operation.

“It took 20 years for us to complete the original plan and in the process of updating the plan we added a little bit of land, so we needed to include it into the program, and Shane was able with his crew walk our entire farm and do a new long range plan for us that we could work on in small increments, possibly taking another 20 years to complete,” David Emerson said.

“Trees are growing faster. They look healthy to my eye, and I get that feedback from the forestry guys when they walk through, when they say the growth is wonderful on this stand,” David Emerson stated.

“As time goes by you just get a sense of pride in the forest,” Marvin Emerson added.

“The first few years we were still trying to understand what we were doing and sometimes we tried to go too fast on what we were doing. We found out that you don’t have to get in a hurry. You just need to be steady, taking the steps forward that need to be taken. Don’t try to do it all at once. Space it out, so you have different growth stages. We’ll want to do one TSI and then we want to wait a little while and do another TSI. I thought when we first started, if we had five TSI to do, let’s do them all right now. Shane would say slow down, you’re trying to go too fast here, let’s get it in different growth heights, and it does wildlife better and doesn’t push the plan, and it gets it accomplished, and wildlife benefits from it,” David Emerson stated.

Both of the Emersons enjoy the wildlife found on their forest property. Their Fisheries office is filled with hunting and fishing mounts. David Emerson pointed out that the wildlife benefits can be seen from their timber management practices. He stated that after some of their TSI work, the areas will be difficult to walk through, but years later it will be prime “big buck” habitat. He explained the early years of the improvements will benefit other wildlife. Marvin Emerson added that the improvements did not just benefit deer and turkey, but many other forms of wildlife from squirrels to owls.

“The big key to this is having a good forester with highly trained knowledge, because he can help you be patient as the forest produces more, and to gently see those things that he said could happen, happen. As a landowner it was a very pleasant surprise,” David Emerson indicated.

“Shane told us these things were going to happen. We might have been a little skeptical, because it doesn’t happen overnight, it takes a little while. It is a long term kind of thing,” he added.

The Emersons stressed they needed guidance from the forester so that they weren’t confused on what to do and they actually found it nice to be able to follow his instructions.

“He gave us the confidence that helped us. With the outline he gave us, we could say, ok, this makes sense. This is a logical model on how you improve your forest. Pretty soon you figure out your forester is competent about what they are telling you, and talking about,” Marvin Emerson added.

The Emerson’s forest lands are primarily hardwoods. There are some native pine on the ridge tops, but the pine forest is very limited and no pine has been sold yet. They anticipate selling some pine in the next few years.

“Before mom and dad purchased this place in 1950, they cut everything down. There wasn’t a saw log left,” Marvin Emerson stated.

The only reforestation that has occurred on the property was native trees reproducing by themselves. There has been no planting of trees.

Prior to starting work with a forestry management plan, the Emersons had some trees logged in the 1970’s. The last big material was cut off in the early 1980’s, and a team of mules was used to skid some of those logs out. It was estimated that they hadn’t cut anything for approximately 20 years after the 1980’s cutting.

The Emersons explained that some of the initial work in the forest included the cutting of trees of limited value to help the other timber improve. This work takes some communication with the crews doing these cuttings, so they understand the purpose of the work, because they won’t be cutting the most valuable timber.

“We’ve learned so much since starting,” Marvin Emerson stated.

“I would encourage any landowner with property with trees on it, no matter if it’s only a few acres, to get ahold of a forester, and have a visit with them to see what potentially you might be able to do on your acreage. I would think it would be down to even five or 10 acres. A 20 acre farm might just be an awesome piece. A forester could very possibly point you in a direction for long term satisfaction. A healthy forest right in your back yard,” David Emerson added.