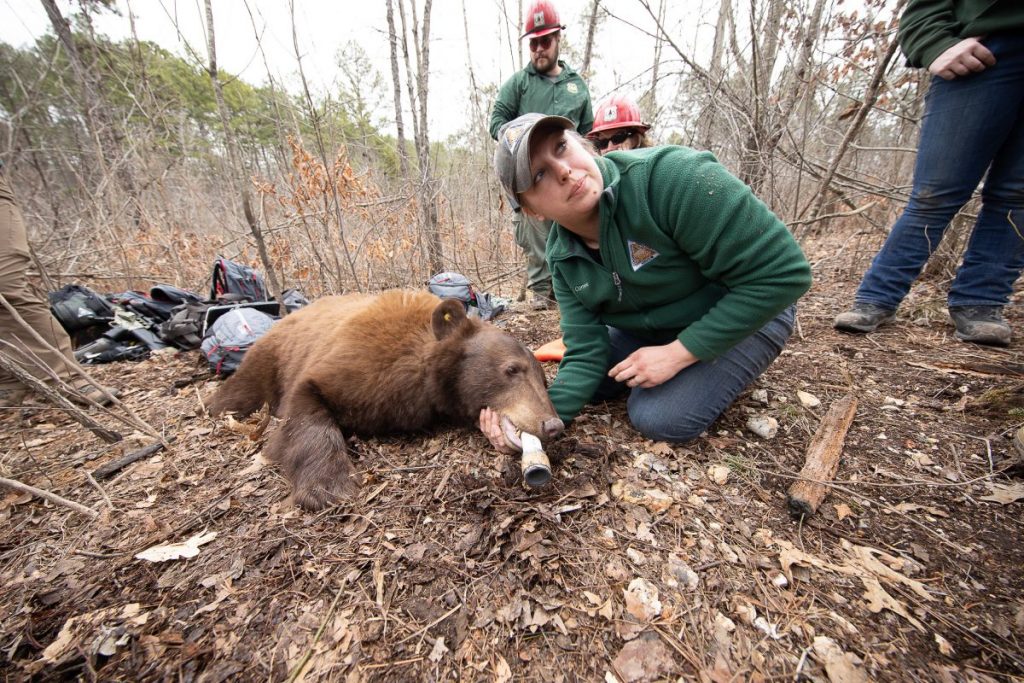 The Black Bear is native to Missouri, but the numbers were almost non-existent in the state by the mid-twentieth century. The Missouri Department of Conservation (MDC) in its bear management plan indicates a verified report of a black bear killed in southeast Missouri in 1931. The management plan history also referred to rumors of bears in the Ozarks during the 1940s and 1950s, and there were 54 reported occurrences of bears in 27 counties from 1950-1972.

The black bear numbers in the state have now rebounded to the point that in October, Missouri will hold its first black bear season. The state has three bear management zones south of the Missouri river in which hunters can apply for permits as part of a quota system. Douglas County is included in zone 1. Zone 1 includes parts of southwest Missouri with 200 permits issued and a harvest quota of 20 bears. The other two zones will have a combined 200 permits issued with a harvest quota of 20 bears. Persons can apply for the permits through May 31.

Prior to coming to the MDC, Conlee had been working in Massachusetts for nine years. During the first year of her employment in Massachusetts, a retirement resulted in Conlee taking over the state’s bear project. She indicated she has been working with bears for about a decade.

“We have collared bears that have been collared from Christian County, all the way over to Reynolds County and many, many of the counties in between. We have marked bears all over the place. We have 27 bears that are currently collared and they are spread across that southern range and we ear tag every bear that we handle. So we have a lot of ear tag bears. That region is a focal point for the study, so over the course of the study from Christian to Reynolds County, it’s a good possibility we handled bears in any or all of those counties,” she said.

Conlee indicated there were a number of factors which go into setting the quotas for each zone.

Conlee pointed out that bear management is an area that is super multifaceted, and the MDC has many persons working with bears in a variety of capacities.

“We have quite a few folks who work on the project. Our main project is out of my shop, so we have myself and two technicians. We work with a lot of regional folks,” she said.

Along with the research work, including trapping and collaring of bears, MDC personnel work with bears in other areas, including responding to human/bear contact.

“We have wildlife damage biologists that go out and will help folks set up electric fencing or talk about why the bear is coming into their yard. We have folks oversee our educational program related to bears,” she said.

The current Missouri bear population includes elements from the original population along with bears from Arkansas and Oklahoma populations.

Conlee stated that in 2010 and 2012 when the MDC did the initial population study a part of the study was to better understand the genetic makeup of the population.

“We did have an indicator that we had a small remnant population here. So a few bears had been in the most remote locations of the Ozarks, but we also obviously had bears from Arkansas. Arkansas had done a series of reintroductions in the 50’s and 60’s and after that it was a very successful reintroduction program. Bear numbers grew there. We have never reintroduced bears here in Missouri. The thing we see here is the result of natural growth,” Conlee said.

The management study indicated the Arkansas reintroduction included 254 black bears from Minnesota, and Manitoba, Canada which were released in the Ozark and Ouachita mountains of western Arkansas.

The range of bears can be very large.

Conlee indicated that female bears generally have a range of up to 25 square miles with the size of the range being dependent on season and availability of foods.

“The males, during the breeding season, can be upwards of 100 square miles. They move really, really big distances. So once bears get into that adult age, they settle down. They establish a home range. That’s the area they use. There are variabilities on what that size is, and most of it depends on food availability. For younger bears, starting around now and into the summer, you have yearling bears that are basically out on their own for the first time. Two and three year old males really haven’t settled down into a range yet. These bears can wander huge distances. We had a collared bear that was collared in southwest Missouri, who ended up moving around, ended up north of interstate 70 in Warren County, was re-collared up there, was back down in Cape Girardeau County and settled down in Shannon County. You’re talking hundreds of miles covered in the course of a couple of years. They can move really, really substantial distances. And this time of year is when we see bears show up south of St. Louis. A lot of times just wandering young bears,” she explained.

Conlee stated they are seeing some directionality in the expansion of the population.

“A lot of it follows forest connectivity. So, bears are a forest dwelling species, pretty adaptable and can use a variety of different habitats, but they are quite dependent on forest and so in terms of where we get bear reports, we see that directionality moving in the northeast direction. But that being said, we also have an increasing number of bears around the Lake of the Ozarks and occasionally get reports around Truman area, starting to get more reports in that direction. Really when you think about it, it’s these forested areas that have that potential and the more connected the forest, the greater the potential is for bears to move through. The spread is not equal across the board, but that is not to say we don’t get bears outside that typical spread. They can go anywhere the habitat takes them. They will use wetlands and other areas like that, especially this time of year. That’s what has the first available foods. That’s where it is greening up first. They will use fields, and field edges. They’ll use agricultural lands to a certain degree, but you don’t have bears set up home ranges in open landscapes. They do need that forest to survive, ” Conlee said.

“We do get bears that come into towns and communities, and residential areas, and that’s because there’s easy food there and especially when those communities are in proximity to that good forest. It kind of sets up that perfect storm for bears to be able to utilize the natural habitat, utilize the natural foods, and then when the opportunity strikes to get into the neighborhoods, and get into bird feeders or get into a trash can,” she added.

Conlee stated there is no real figure for the maximum number of bears the state can sustain.

“One of the things our bear management plan identifies is the establishment of population benchmarks and a lot of that would be based on habitat, what the habitat can support, but also social-tolerance levels. So when you think about bears sharing the landscape with people, there’s a lot of species where social level kind of dictates where that population lands, rather than just the habitat. So these are the things factored into these considerations.”

Included among the regulations of the upcoming Missouri bear season is that only lone black bears can be taken.

“Bears by nature are solitary. They don’t live in family groups,” Conlee indicated.

Among the instances where people might see multiple bears is when a female is with young. These young born in the winter den will stay with the female generally through the second winter and they disperse the following spring, Conlee stated.

“We see numerous reports of multiple bear sightings. We get sightings of females with young. We have a lot of folks with trail cameras, so a lot of times people get multiple bears on their trail camera and will send in the reports that way,” she said

Conlee also pointed out that not all of the bears are black in color, some have lighter shades, brown, cinnamon or even blond.

Another requirement is the submission of a tooth from a harvested bear.

“We get age data and can look at age structure of the harvest with respect to sex of bear. It gives a more detailed picture of makeup of harvest and can be used in population modeling to help us form the management decisions relative to quotas,” Conlee stated concerning the submission of a tooth.

Some of the hunters selected to have a chance to participate in Missouri’s first bear season may face different challenges.

“Bear hunting is just inherently different than any other game species. One of the things, especially related to bears, they are not evenly dispersed across the landscape and at low densities and so bear hunting is a challenging endeavor regardless of the methods that you use,” Conlee indicated.

Conlee explained that the MDC looked at success rates from other states which don’t allow the use of baits or the use of dogs. Generally the success rates were below 12 percent for the hunters, she stated.

“You have to put in your time scouting and finding a good spot to do that, but it’s just inherently different from other game species. They just don’t occur at density like deer would occur,” she said.

An explanation of the permitting process and regulations for the bear hunting season is included in adjacent MDC release.