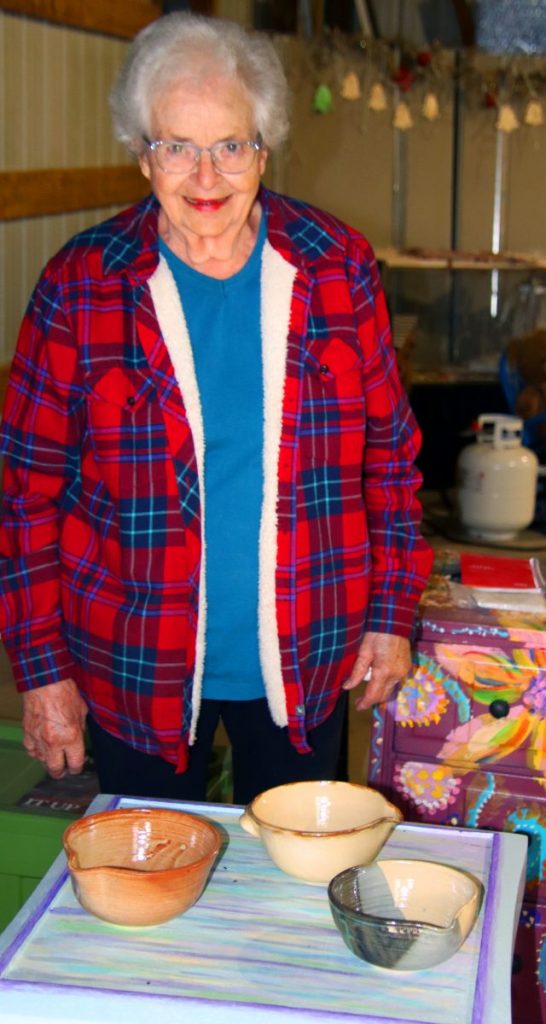 Doug Berger/Herald Louise Walker with some of her best-selling pottery.

Louise Walker as a young child lived in Santa Fe and on a ranch in New Mexico, a state known for its connection to Native American pottery. But it was after leaving the state and later returning that she began seriously pursuing her interest in the art form.

“Pottery came after I did other art. I did painting and that started in Alexandria, Virginia, about 60 years ago. I love to paint,” she said.

“It was one way of getting to know people in Alexandria and so art has served that purpose for me, and I’ve moved all around the country.”

Her Douglas County home’s walls are covered by her paintings ranging from landscapes of the southwest to still life. But she also has on display her pottery, and pottery she has collected from other potters including Native Americans.

“I grew up in New Mexico and then we lived in Ohio for a while after I got married. We lived in Durango, CO., which was a lovely place, and then we moved to Santa Fe. After Santa Fe we moved to Alexandria, the Washington D.C. area. Then my husband retired from government and we went back to New Mexico. After we went back to New Mexico we wound up in Roswell, and Roswell turned out to be an interesting place. They had a wonderful museum and Aria Finch was the pottery teacher there and she taught me how to throw and she was just really a super person,” Walker stated.

“I had just kept looking at all the pots in Santa Fe and thinking, I wonder if I can do that,” she added.

Walker explained that they lived in Roswell for four or five years and her husband lost his job when the oil business hit a hard period. He was a geologist. She explained he had to do something, he had retired early from the government. They went to South Carolina, near Augusta, Georgia, and again there was a nice art group there, she said.

“I set up a studio in a storeroom behind the house and several of my friends would come over and we’d all play with the art.”

“Augusta is a very interesting place, because it’s an old clay area where they made bricks and they made terracotta flower pots. People there understood clay and they wanted to know how I was firing and what we were doing. That was kind of a fun place. They had a clay there that was kind of rough because it wasn’t filtered too much. I made tons of stuff with that clay and it was a bad clay for functional stoneware. It leaked. So you made a cup and set it on the table and pretty soon there would be a big circle. It was a beautiful Georgia clay, but it just had that problem, but you could make other things out of it quite nicely,” she stated.

With her husband being a geologist it added to her interest in pottery.

“We would look at all different kinds of clay. He liked to play with fire too. So we did a lot of Raku pottery. We had a Ph.D. chemist, about the same age as our kids and he latched on to John at work, and I still hear from him. He was interested in glaze. We’d get out there in a little hand built kiln, stacked up bricks,” she added.

“The clay and the glaze are the interesting things to me,” she stated.

“It’s an awful chore to do Raku. You’ve got to watch your pots in the kiln until they get red hot and then  you pull them out of the kiln with tongs and you put them into a reduction chamber, which was a garbage can with some newspaper, and then you wait for that to cool down some and you could pull it out and see what you’ve got. But it’s very quick,” Walker explained.

Walker stated the locations she lived at were an important influence on her interest in art.

“I was born in Santa Fe, so Santa Fe was very familiar to me,” she said.

“Santa Fe was unbelievable. That’s where I got really interested in painting,” she indicated.

She explained her interest in pottery evolved over time. Along with the artistic element she found the history involved with pottery important to her.

“I love the comradery. You can talk, visit and you can also work,” Walker stated about working with pottery.

Walker has a studio and display room on her property, housed in a former 40 x 60 foot pole barn.

“I’m always thinking about what I could make.”

“These days my pottery is primarily functional. It didn’t used to be. I’ve gone through stages,” she said.

Most of her pottery is thrown on a potter’s wheel.

“I’ve gotten away from doing much hand building, but I used to do a lot of it. I really like hand building. You can do platters with hand building and come up with something you like,” she said.

The colors you get from your pottery are not the same every time, Walker explained.

“The colors will not come out the same every time, and that is really frustrating to some people,” she stated.

She said she tries to tell these people that it is just part of dealing with pottery.

“There always is a surprise when you open up a kiln,” she pointed out.

Walker does conduct classes at her location.

She doesn’t know how much time she spends in the shop. She indicated that on some days she would get there at 10 a.m., some days earlier and some days she would not be at the shop at all. She also explained it is hard for her to estimate how long it takes to make a piece of pottery, because each has different elements and will have to progress through the steps.

After her pottery is thrown it will be fired twice with the second firing including the addition of the glaze.

“I laughed at one of my friends who was learning pottery. She wasn’t going to sell her stuff. Well she got too much, and she had to start selling it,” Walker stated.

Walker stated you never really know why the customers are buying the pottery. She anticipates some buy it for functional use, some as a collector and some as a way to decorate their homes.

She feels most customers seem to like functional products that they can use.

“A lot of what winds up in my cabinet are pieces that wouldn’t sell, people didn’t like, so I use them,” she stated.

One of the outlets for the sale of her pottery is a show at her shop, which is held in the middle of November. Along with Walker’s pottery, the show will feature other area artisans with their works.

“It is a very nice show because everybody does something different,” she said. 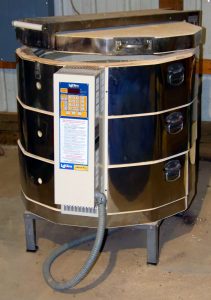 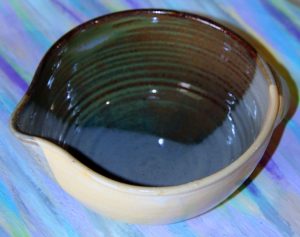 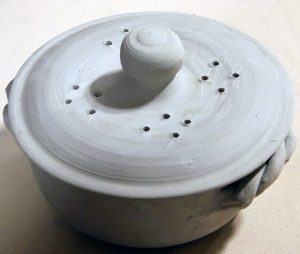 Doug Berger/Herald
A steamer waiting to be fired. 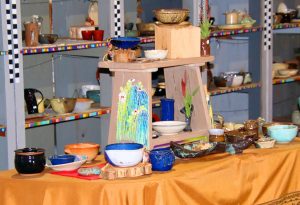 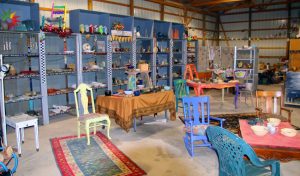