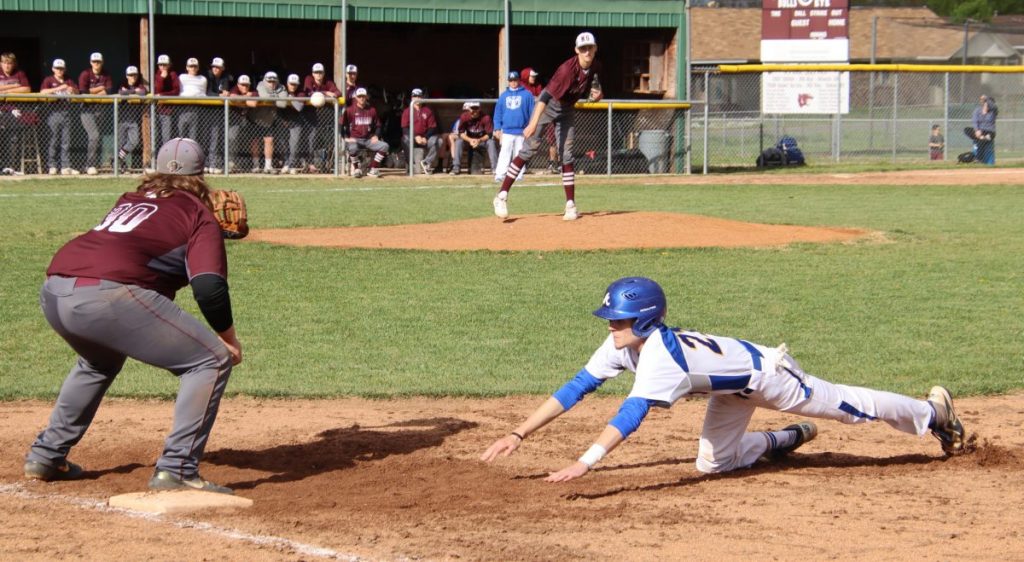 Doug Berger/Herald A Bear dives back into first ahead of a Panther pickoff attempt.

The Bears opened their week with a 14-0 win at Liberty in a South Central Association Conference game.

Ava scored their first two runs in the second. After Colton Marler and Andrew Dalton had walked. Creighton Regennitter would bunt and reach on an error which would allow a run to score. After Dalton stole third, he would come home on a ground out.

The Bears added six runs in the third. Spencer Skyles would reach on an error. Skyles would steal second and score on a Corey Heinlein single to center. Heinlein would be forced at second on a ground ball which allowed Zach Richards to reach. Zack Miller would follow with a double advancing Richards to third. A walk to Marler loaded the bases. Dalton would also walk forcing in a run. Regennitter would double scoring two. Bryse Dodson would drive in the seventh run with a sacrifice fly to center. Caden Lee would single scoring a run.

Ava added another run in the fifth. Regennitter singled, and would advance to second on a throw which cut down a Bear runner advancing to third. Regennitter would steal home and Dodson would drive in another run on a sacrifice ground out.

The Bears scored their final runs in the top of the sixth. With one out, Quinton Donley would walk. Reece  Adams singled with two outs, and Dalton would follow with a single to load the bases. Donley would steal home and Regennitter would single in another run. Zach Mendel walked loading the bases. Lee singled scoring a run. Ashton Stout singled scoring the final two runs.

Andrew Dalton threw the first four innings and struck out nine hitters to take the win. Miller finished out the final two innings, striking out three. The Ava pitchers walked no Liberty Eagles.

The Liberty hitters picked up six hits in the game.

The Bears followed up their Monday shutout with another on Tuesday, shutting out Springfield Central 11-0. Dodson and Richards combined their efforts on the mound for the Bears to record the shutout. Dodson opened the game for the Bears and went the first four innings to take the win.

Ava started their scoring in the top of the first. Heinlein led off with a single. Skyles reached on a dropped third strike. A Miller groundout would score Heinlein. Dalton would single in the second run.

The Bears third run came home in the second when a runner who had reached on a fielder’s choice would move up on a ground out and score on a wild pitch.

Miller led off the third inning with a triple. He scored on a Dalton single. Two more Ava runs went on the scoreboard in the fourth. Heinlein singled and Skyles followed with a homerun.

Ava tallied five runs in a long fifth inning. Regennitter singled and scored on an error, which put Mendel at first. Adams and Payton Evans followed with singles. A ground out would score a run. Another ground out would score a run. After two walks loaded the bases, a third walk forced in a run. The Bears picked up their final run of the game on a Ryan Thompson single.

Dodson struck out ten in the game and allowed only one hit, and two walks.

Ava took their third win of the week with an 11-4 win over Mountain Grove in South Central Association Conference play.

Skyles would open up the Bears scoring in the first inning with a home run. He would add three more hits during the game.

Mountain Grove came back in the bottom of the first and tied the game.

Four additional Ava runs came across the plate in the second inning. Marler opened the inning with a single. With two outs the first Bear would score on an error, which allowed Mendel to reach. Evans singled. Heinlein brought them home with a triple. Heinlein would score on a Skyles single.

The top of the fourth saw Ava scoring another three runs. Mendel led off the inning with a walk, and Evans would single. An error would load the bases. Skyles would single in another run. The final two runs came home on singles by Richards and Miller.

The final two Ava runs of the game came home in the sixth inning. Skyles would double, and advance to third on a groundout. He would score on a passed ball. Miller had reached on a dropped third strike, and came home on a Dalton double.

Mountain Grove was able to put another run on the scoreboard in the bottom of the seventh, but couldn’t catch Ava.

Richards threw the first six innings and took the win for the Bears.

The Bears will travel to Thayer on April 15 and New Covenant Academy on April 16. They will return home on April 19 to face Houston. 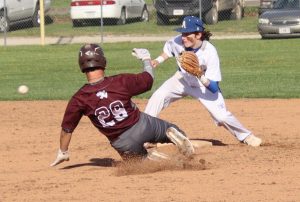 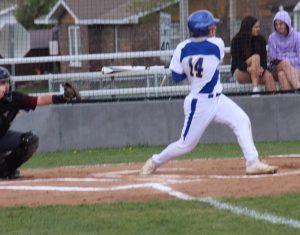 Doug Berger/Herald
Ava Bear Spencer Skyles connects in the first inning of the Mountain Grove game to open the Bears scoring with a home run.