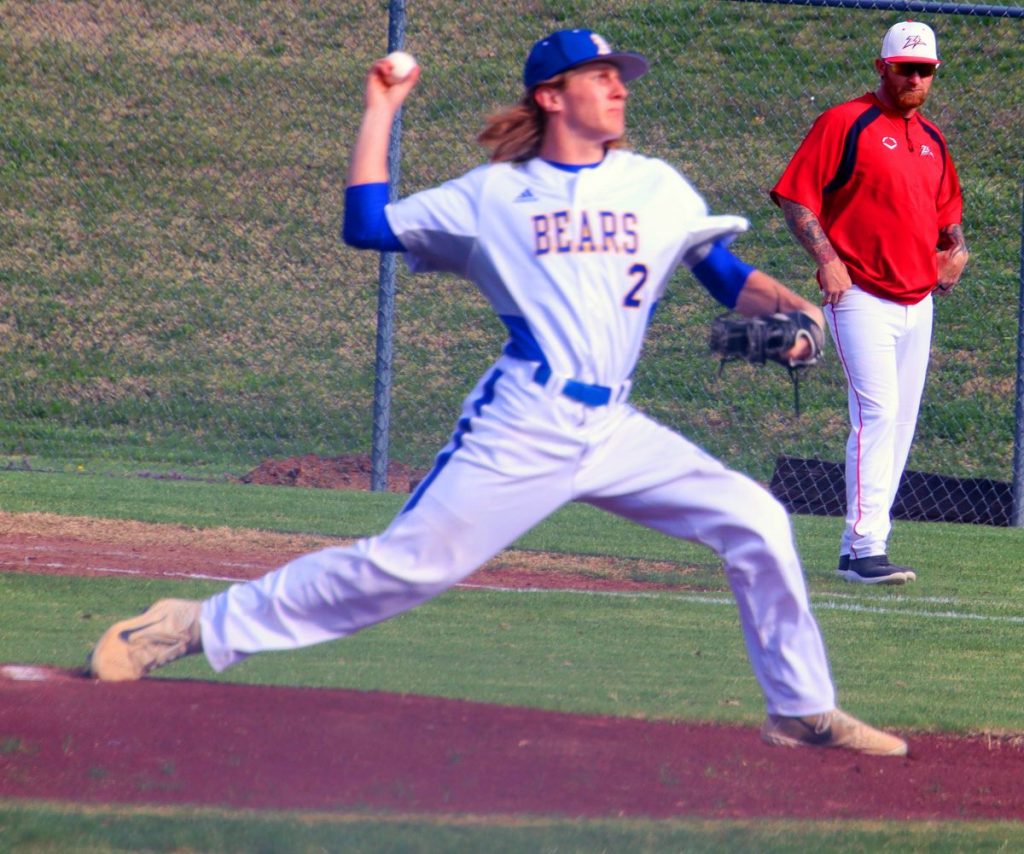 Doug Berger/Herald Ava Bear Zach Richards took the win on the mound last week against the West Plains Zizzers. Richards also opened up the scoring for the Bears with a homerun in the fourth inning.

The Bears opened the week with a 10-3 win over the West Plains Zizzers.

After three scoreless innings, the Bears broke onto the scoreboard with a four run fourth inning. Zach Richards led the inning off with a homerun over the left field fence. Ava followed up with four more hits including singles by Zack Miller and Creighton Regennitter and back to back doubles by Colton Marler and Andrew Dalton. The four hits resulted in two additional runs. The fourth Bear run of the inning came home after Bryse Dodson walked loading the bases. Payton Evans drove in the run with a sacrifice fly.

Ava came back in the fifth inning and added two more runs to their lead. Richards and Miller opened the inning with singles. They moved over to second and third on a groundout. A walk to Dalton loaded the bases. Regennitter singled home two runs.

West Plains was able to score a run in the sixth by following two walks with a single.

In the Bears half of the sixth inning they scored their final four runs. With one out, Spencer Skyles would single and steal second. Corey Heinlein would walk, and Skyles would move to third on a passed ball. Skyles would score on a Richards single. After Miller walked loading the bases, Marler was hit by a pitch forcing in a run. Dalton would single driving in two more runs.

The Zizzers were able to score twice in the seventh, but couldn’t threaten the Bears lead.

Richards took the win throwing six and a third innings and striking out nine. Miller finished up the game on the mound.

Richards had three hits in the game including his homerun. Three Bears had two hits, Miller, Regenitter and Dalton.  Dalton picked up four RBIs in the game.

The Bears had to come from behind to take an 8-5 win from Mansfield on Thursday.

Mansfield opened the scoring in the game with two runs in the top of the first. Mansfield had the lead-off hitter reach on a walk. A double put runners at second and third. Bryse Dodson would strike out the next two hitters, but would give up a walk, and a Lions single drove home the runs.

The Bears came back in the bottom of the inning and took a 4-2 lead. Heinlein and Richards would single. Miller was hit by a pitch. Dalton would double driving in two runs. Regennitter would single in another run, and Dalton would score on a passed ball.

Mansfield would tie the game in the fifth inning with the fourth run scoring on an error. Mansfield  took a 5-4 lead in the top of the sixth. Mansfield put a runner on with a single. Regennitter took over on the mound for the Bears, and the Lions doubled into right field, but Dalton threw out the runner trying to score from first on the double. The Lions runner would advance to third on a passed ball, and score on a single.

Ava again responded in their half of the inning scoring three runs. With two outs, Regennitter singled and stole second. Marler would single. Reece Adams singled scoring Regennitter to tie the game. A second run came home on a passed ball. Evans was hit by a pitch, and Skyles walks. Adams would score the Bears eighth run when he came home on another passed ball.

Mansfield put two runners on in the seventh, but couldn’t score.

Reginnitter was credited with the win for the Bears. He pitched one inning. Dodson threw the first five innings and struck out seven. Miller finished the game up on the mound for Ava.

The Bears will host their next varsity home game on April 19 against Houston.