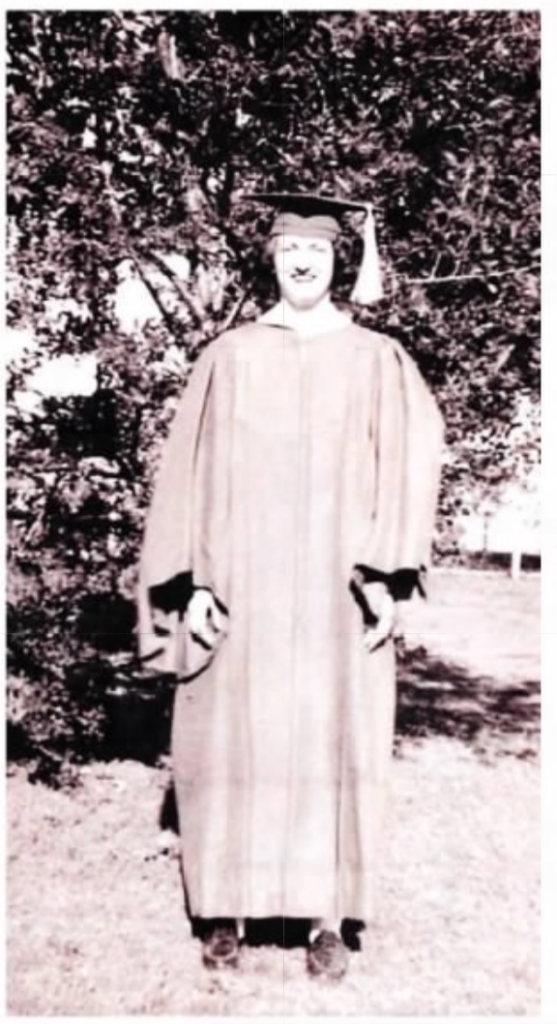 It was shortly after returning to her home in rural Douglas County after having spent months in the hospital with polio, that Barbara Sisney Daniel began submitting articles to the Douglas County Herald. She recently returned to her Bolivar home from another hospital stay and is again planning to submit an article to the Herald, over 70 years after her first submission.

One of her first articles to appear in the Herald was published 72 years ago on March 24, 1949. It appeared under the heading of Whites Creek by Barbara Jean Sisney. It included visitors in the community and a church singing at Black Oak Church. Her most recent submission went under the heading of Barbara Sisney Daniel and was titled Misdial to Serendipity. In this article she relates the loss of a friend to Covid and the addition of another friend through a telephone misdial.

“When I was in the hospital with polio, I took a Voice of Prophecy Bible course, that comes out of the Seventh Day Adventist church, but I’m not a Seventh Day Adventist, but it gave me insight into other peoples’ stories and what was going on in my life. I had turned 15 by then. I came home and was home a few months and gained my strength back. Someone in the neighborhood of Whites Creek said I needed to write the neighborhood news,” she stated.

She described Whites Creek as “just a little place down in the valley about two miles from where our farm was where I lived.”

“My little brother and sister went to school there and I couldn’t go back to school. So I started this correspondence course and the courses gave me insight into writing. It seemed like I had something were it came naturally to do these things,” she said.

“So, I thought, well I’ll give it a try,” when it was suggested she write the neighborhood news.

“I turned 15 in January and came home in July from the hospital. My relationship with people had changed. My insight into humanity had changed. I no longer thought as a farm girl with very little knowledge. I began to see how people really were and had just scratched the surface. So I started writing for the Douglas County Herald, the community news. And I don’t know how long that continued. It was three years before I got to go back to Ava High School and do my senior year. I had gained enough strength to do it and pretty much on my own with crutches. I never laid down the writing. I was fascinated by it. And I don’t recall continuing the community news, but I must have because there wasn’t anyone else doing it,” she related.

She also wrote for the General Baptist Church News.

“This seemed to be something that God wanted me to do. After I got married in 1952 and had our little boy, I was preoccupied. That’s why I would concentrate on church news for the Poplar Bluff General Baptist paper, and I don’t recall writing anything in particular for the Douglas County Herald,” she stated.

Daniel indicated she did write a little for the Clinton Democrat and Joplin Globe, because they lived there.

She also took some junior college courses in Joplin, and she indicated her abilities seemed to lean toward writing above anything else.

“But I had a lot of interests. Life in general fascinates me,” she said.

One of those interests is history. She has done some articles related to history for publications, including an article when they started building the dam for the Sac and Osage Rivers.

Daniel explained many of her articles comes from her own observations and experiences including a trip west to the Jack London library. She stated that she has always been fascinated with the author Jack London. A biography of London by Russ Kingman helped develop this interest. She pointed out she even enjoyed some of the lesser known facts about the author including that he brought the first Eucalyptus trees to California.

“I had some antique books I wanted to give to the Jack London library. We had a trip to Oregon we were making to see a friend and we would go on to California. We were on the road traveling when the planes hit the towers. I had never seen such quietness in my life as we experienced that day. I wanted to go home. We were almost on the Colorado border and my husband said we are not going back. We traveled all that day and we never saw a plane in the sky,” she remembers.

Another event which stood out to her was as a small girl hearing her grandmother tell her mother about Lotta Crabtree. She was a relative. Daniel explained her mother’s family was named Crabtree. Crabtree was an actress known as the goldminer’s daughter. Crabtree was wealthy at her death and left her estate to philanthropy.

Daniel also remembers her friendship with artist Fred Deaver, who was known for his western and wildlife art.

“I’d have these gaps in my life that would get me off on a rabbit trail,” and wouldn’t write.

In recent years she contacted the Herald again about writing her column.

Finding time is one of her biggest frustrations in writing. She turned 89 on January 22, and her husband is 90.

“We celebrated our 69th anniversary on March 1, and had to view each other through plexiglass, and we hadn’t seen each other in quite a while,” when she was recently spending time in the hospital.

“I went through surgery January 5. I wasn’t sure I’d live, because they had put this gall bladder surgery off because of Covid. Couldn’t get to doctor. Couldn’t get to hospital. So I toughed it out here at home and continued to write,” she stated.

“I decided to come home after seeing how the nursing home and hospital stuff works. And it’s just me and my husband here now. He’s taking care of me, and I’ve got a nurse friend. I have the most wonderful husband, but he gets impatient too. But he keeps the laundry done up,” she stated.

“My life consisted of being a good mother. That was my goal, along with being a wife and homemaker, but I always wrote small things, off and on,” she said.

“So much is going on in the spiritual realm around us we can’t see with the physical eye, but once we learn how God is a miracle worker, a super natural God. He’s here and sometimes we wonder where he is at the hardest times in our lives, but he’s here. What we have to do is trust,” she stated.

“I’m still living and still fighting for my life at 89 years of age. I have appreciated everybody who has enjoyed my writing and I’ve gotten lots of comments on that. But I do my very best to not offend other than in a satirical way, were somebody might see the truth. But we’re living in a time when people don’t want truth. Everyone has a positive story to encourage others,” she said. 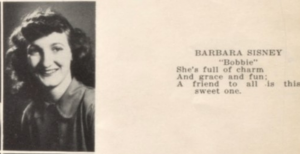 Herald Archives
Barbara Sisney – aka “Bobbie” in the Ava yearbook.

Time to be Thankful

In Memory of Cpl. R.M. Wheat