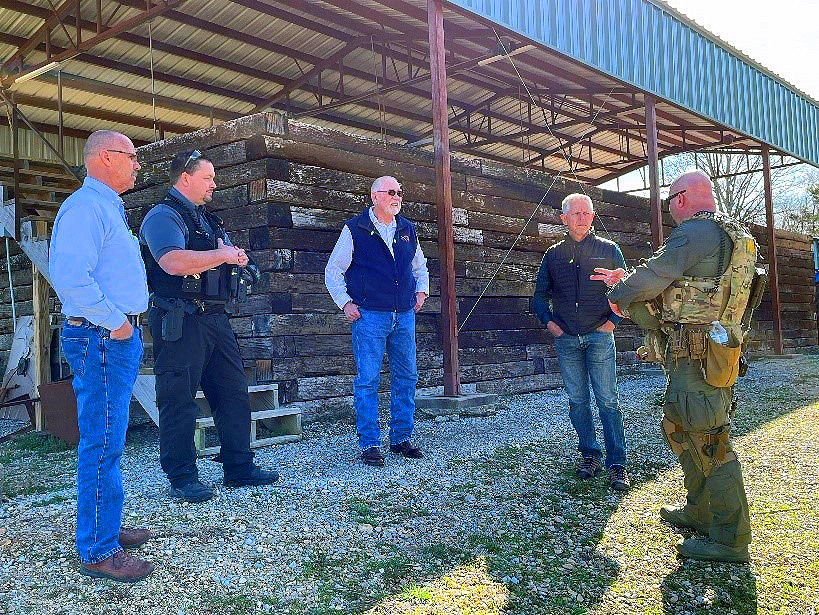 On Tuesday, March 23rd, the Ava Board of Aldermen convened for a business session at 5 p.m.

City Treasurer Peggy Porter said she was gearing up to begin the budget for the next fiscal year.

The Aldermen voted 3-0 to approve Resolution #2021.03.02, which authorizes the city to enter into a contract with Aaron Williams for the Officer Training Reimbursement Agreement.

The next city-wide cleanup will be May 3-7. Watch for announcements in the Herald.

Mayor Loftin reported that crews are finalizing work on the square, correcting issues like places not draining. The last big step will be replacement of the asphalt inside the square. Loftin said he hoped all work would be completed by mid April.

Loftin said the sand filter replacement at the Wastewater Treatment Plant should be underway by the end of the week.

Mayor Loftin said Suzanne Welsh is working with the USDA to get a grant to help pay for new air packs for the city fire crew. Total cost would be around $70,000, and the city would be required to provide 25% of that (or roughly $17,500).

Alderman Billy Stewart commented that the current air packs can’t be repaired any longer so will need to be replaced.

Mayor Loftin mentioned that Memorial Day is upcoming so cleanup work at the city cemetery is getting underway.

Loftin described a recent visit by himself and Aldermen Jones and Lovan to the Douglas County-based Shield Solutions. Loftin said for an annual cost of $2500, the city could provide all required training to its officers, far less than the room and board would cost to send officers out of town. The board voted 3-0 to join Shield Solutions.

Peggy Porter reported some initial work in implementing the “smart” water meters in Ava. She said the first gateway is installed by Copeland, and they are connecting meters in a very slow, deliberate process. “It’s a very complicated system,” she said.

Mayor Loftin said the city had gotten its boom truck back with a new boom. A crack in the boom was detected during annual inspection, and the only fix is to replace the entire boom. Cost to the city was around $20,000.

A request for a Pickleball court was brought to the city by visiting missionaries.

Mayor Loftin said he’d never heard of the game, but had other requests for it recently.

He said the city tennis courts could be modified with new markings to accommodate the game, described as easier to play than tennis and “more or less like ping pong on a tennis court.”

Loftin had contacted the parks department and intended to follow up to see what it would take to modify the tennis courts at the city park to accommodate the game.

During closed session the Aldermen voted 3-0 to hire Aaron Williams, providing his acceptance into the Drury Police Academy program.

City officials and aldermen will reconvene on April 13th at 5 p.m. at City Hall. Meetings are open to the public.