The Ava Bears had their season come to an end in the sectional matchup with East Newton. The Patriots were able to edge the Bears, 36-34.

The game saw both teams put up strong defensive efforts. East Newton brought one of the biggest teams to the Ava court this year. Four of their starting five were 6’2 or more. The Bears came into the game with a 23-5 record, and East Newton had posted a season record of 25-2.

Ava would jump out to a 7-2 lead in the game, but the Patriots came back within one at the end of the first quarter, 9-8. Andrew Dalton had scored all of Ava’s points in the quarter.

The Bears held a four point lead midway through the second quarter, but with just under 44 seconds remaining in the half East Newton went on top, 18-16. Blayne Mendel was able to sink a last second shot for the Bear’s to tie the game at halftime.

East Newton scored to open the fourth quarter, and with 5:38 remaining in the game Bryse Dodson put in his first two points. He would follow up with two more to cut the Patriots lead to two. East Newton would convert two free throws to go back on top with 3:59 remaining in the game. Quinton Donley sank a shot from two point range to again pull the Bears within two. The Patriots converted two free throw attempts for a four point lead with 1:24 remaining in the game. Two Dalton free throws again put the Bears within two. East Newton would score from two-point range and had a four point lead, before Quinton Donley sank a three-point shot with 38.9 seconds left in the game. The Bears were trailing by one when the Patriots 6’5 senior Connor Killion with 12.7 seconds remaining sank the first free throw of a one and one. Killion’s second shot went off the rim and the Bears secured the rebound, but couldn’t get down court far enough to set up a good shot. Ava’s half-court attempt fell short and the Patriots hung on for the win.

Kimbrough led the Patriot’s scoring with 12.

Dalton’s 18 points made the junior the Ava Bears all-time leading scorer with 1,746 points

East Newton faced Blair Oaks last Friday on the Patriots’ home court. Blair Oaks took the win downing the Patriots, 44-40. Blair Oaks will now advance to the state final four and face Vashon on March 19 at John Q Hammons Arena in Springfield for the Class 4 semi-finals. On the other side of the semi-final bracket is Westminster Christian Academy and Barstow. 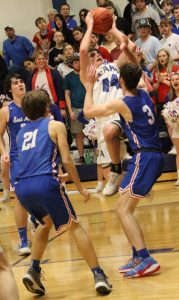 Doug Berger/Herald
Andrew Dalton puts up a shot over an East Newton defender in the sectional contest. 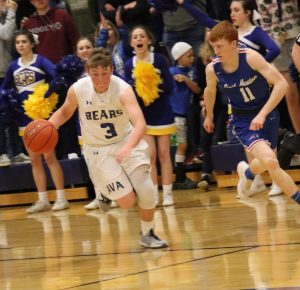 Doug Berger/Herald
Quinton Donley breaks away with a steal late in the sectional game with East Newton. 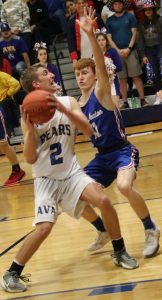 Doug Berger/Herald
Ethan Donley looks for an open Bear in the sectional game with East Newton.