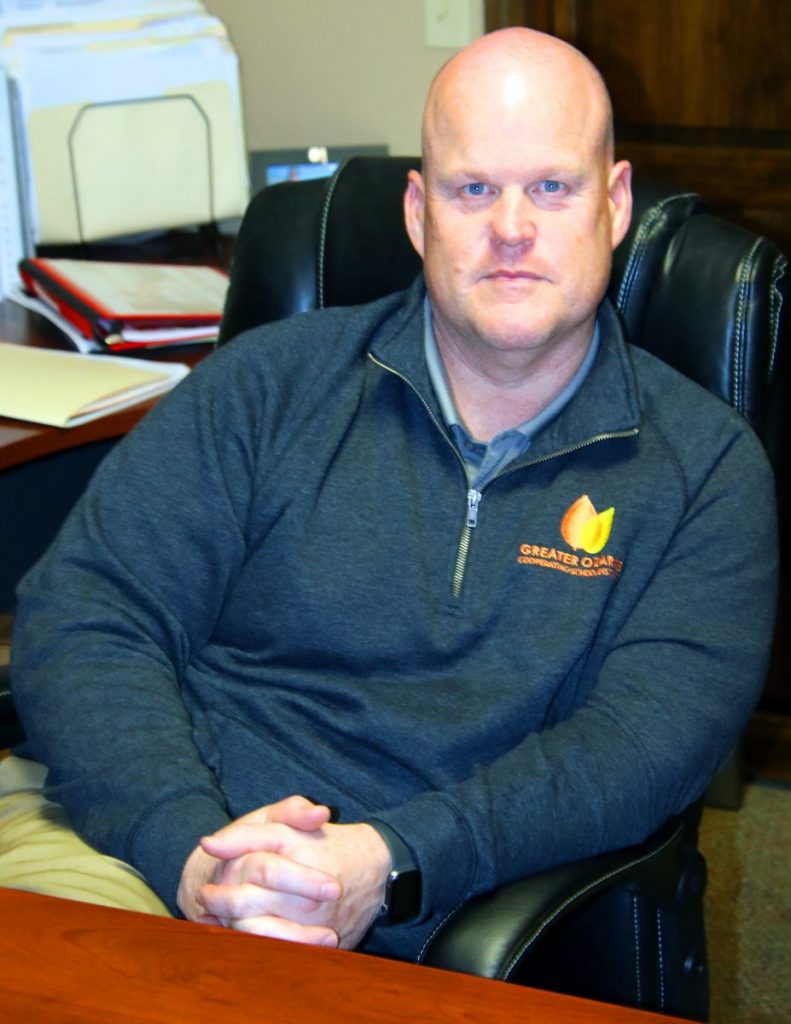 Doug Berger/Herald Dr. Jason Dial is retiring from the Ava R-1 School System at thee end of this school year.

Dr. Jason Dial did not anticipate he would pursue a career in public education when he entered college.

At the end of this school year he will retire after 27 years being involved in the public education system. The last five of those years he served as superintendent of the Ava School District.

Dr. Dial began his career in education at Reeds Spring. During his six years at Reeds Spring he taught physical education and science, and served as the head football and track coach. He also was an assistant basketball coach during that time.

“Originally when I went to college, I thought I was going to do something different. I played college football. I was lucky enough to play college football at Missouri Southern and really enjoyed it. I got injured and had two shoulder reconstructions and I ended up coaching that last year. I coached that spring at the college level and then that next fall I couldn’t play anymore and I got an opportunity to go to Lockwood High School, just as a part-time job coaching football and I really loved it. I loved being around the kids. I thought I would want to coach at the college level, but once I got into the high school setting, I really enjoyed it and it kind of changed my attitude about where I wanted to be. So that’s why I got into the high school aspect of it,” Dr. Dial stated.

Dial credited his mother, who had been a fourth grade teacher for 30 years, an assistant principal, and federal programs coordinator for Reeds Spring, as an influence on his career in education. He stated he is not sure her influence was the reason he got into education in the beginning, but that it absolutely was the reason he stayed in it this long.

Dial stated he had never planned on going into school administration.

“When I got into it I felt I would coach high school football until I retired. I loved it every day. So we played Ava the last two years I was coaching (Reeds Spring). It was coach Silvey’s last year and the year Rex Sawyer was the head football coach and we were lucky enough to win the the district those two years and played Ava. So I got to know coach Silvey and they were going through an administration change at the high school and coach Silvey told me, and asked me if I would be interested doing the assistant principal’s job. I hadn’t really thought about it. I came over on a weekend or a Friday and sat down with him, Dr. Eslinger, and a few other people and really enjoyed the conversation and before I left they offered me the assistant principal’s job. I had a one month old at the time and drove from Reeds Spring for a year until we moved,” he explained.

Dial stated his mother was also one of the influences on his approach when he became the principal of Ava High School.

“I had taken the assistant principal’s job and was here for a couple of years. In December 2001, Dr. Eslinger, the superintendent here at the time, offered me the principal’s job. I called my mom and told her I had been offered the principal’s job. I was pretty excited about it, and she said that is great, but you need to understand one thing. She’s pretty straight forward. She said you just became the least, most important person in the building. And I said what do you mean by that, and she said you become the least most important person in the building because it is your job to make those teachers jobs as easy as it can possibly be. You have to keep the stuff off their desks. The other person who inspired me would be Pat Henry, who taught here. Especially early on and through my first six years here, she influenced my way to look at a school system, and encouraged me to look at what we do for teachers and ensure we are taking care of them so that they can take care of the kids,” he said.

Dial feels the biggest challenge he faced during his education career was the problems schools faced with the Covid situation.

“Well the biggest challenge absolutely has been Covid. That’s been the biggest challenge we’ve faced, absolutely rolling education on its head, and finding ways to reach kids that weren’t sitting in front of you every day. And I felt like we were really prepared, and figured out we weren’t. Just the amazing work of the teachers that has taken place over the last 12 months. In seven days is when I canceled school last year. We did it first for two weeks and then we did it for the remainder of the year on March 12. And that has absolutely been the biggest challenge we’ve had just to pull all of that together. The credit absolutely goes to our kids and our parents and the teachers, the work they did and people that jumped in last spring to help with food deliveries to homework deliveries. There is no question about it,” Dial said.

“Other than that. School is school, kids are kids and parents are parents. There’s great days and there’s not so great days. Every day is an opportunity to be better. I’ve made hundreds and hundreds of mistakes in my career and hopefully I’ve learned from each one and have tried not to repeat it. You are only as good as the people you surround yourself with and I think I’ve been blessed to have good teams of people around me at every location. That has helped us be successful,” he added.

Dial feels coming back to Ava was the highlight of his career.

“I probably haven’t thought about this until the last couple of months. Coming back here as the superintendent has been the highlight of my career. Ava gave me the opportunity to start as an administrator in 2000. In 2006 I left here and I’ve been in charge of the daily operations of a 14,000 student school district with over 2,000 employees and 28 buildings in Independence. But the highlight of my career is coming back here the last five years. When I got here I felt like my job was to assure teachers and the community that the district was stable. And I spent a lot of time just having conversations with teachers, and insuring that the finances were stable and I feel like today essentially the district is in a good spot. I think with teaching staff we are in a good spot. We’ve been able to expand programs and offerings for kids. We’ve put resources in for kids, whether it be through our early reading program, that the community came together and helped develop. The growth we’re seeing in reading with kids. We are truly in a spot where we are preparing them for whatever comes next after they graduate from high school. There are plans to continue to expand those offerings. We do it as finances are available to expand. We have a nursing program at the high school were now a kid graduates with their CNA. We started a computer programming course at the high school. But we are also preparing kids that are going to go to work in a trade as well. So it’s just not college bound kids. I think we’ve expanded it to where you can walk out of our school and be prepared to take on whatever that challenge is you want to take on,” he stated.

Dr. Dial’s  connection with education will not be completely left when he retires after this school year.

He anticipates that initially his work might be tied primarily to education.

“I don’t know that for a fact until I get into it, but that’s were my ties are. That’s where I’m the most comfortable obviously, because public school finance I understand. So I would guess that’s where I would start,” he said.

“I knew after retirement from education I wanted to be tied into schools. Because that’s the environment I like. That’s the environment I know. I know nothing about the corporate world, so I knew I’m too young to stay at home after I retire. I knew I wanted to keep working. This opportunity has been rolling around for a couple of years now with this company. I just decided it was the right time. I’m eligible to retire and I felt Mr. Dalton (Aaron Dalton) was ready. It just was a natural transition,” Dial stated.

“The transition is going to be seamless with Mr. Dalton moving into the position. I could not be happier that Mr. Dalton is going to be the superintendent next year. One person doesn’t make the organization at all. There is a quote out there ‘the sign of a good leader is the organization continues to thrive after the leader leaves,’ and I’m not going to say I’m a good leader in any way, but I think attracting Mr. Dalton back to the district was maybe one of my greatest successes. Curricularly he is great. He is very intelligent and he will take the district to the next level. He’ll do a better job than I did and it’s just a natural transition,” Dial indicated.

“I’m working from home. We don’t have to move. My wife works in Nixa. So we haven’t made the decision on where we are going to live long term. That will come later. We’re blessed to have lived in this community. There are lasting friendships that will never go away. Even when we were gone… we still had friends in Ava. I still kept in contact with those people. I know they will be life-long friends. I just appreciate the way the community has taken my family and I in. I found it interesting that the teachers my kids had in elementary school here were still here when I came back. I counted to see how many staff members were still here. There were 66 staff members that were still here after I had been gone for 10 years. So it was comfortable. It was a blessing,” Dial said.