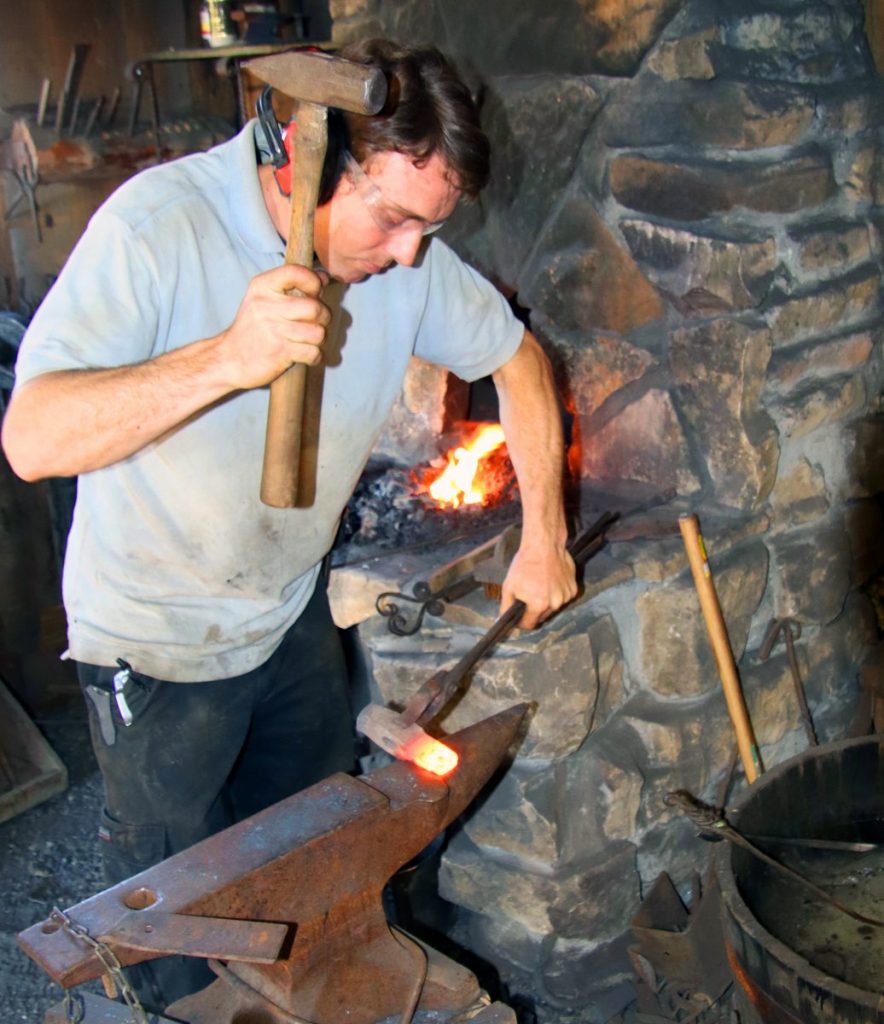 Doug Berger/Herald Matthias Penn works on a tool repair in his blacksmith shop.

Matthias Penn has been swinging a blacksmith hammer for over 14 years.

He built his first shop at the age of 14. The 16×16 foot shop in Douglas County is still in use today, but Penn has expanded it with a 16×20 foot addition on one side, and a coal shed on another. He now also does blacksmithing in other locations, but this remains his home shop.

“I wanted a trade that I could do from home and also a trade that is good in inclement weather, because I enjoy working outside. Also, at the time there wasn’t anyone around here that was blacksmithing, that I knew of. Once I got to doing it, I found out I really enjoyed it, particularly working with people. Making things custom for folks. And that’s primarily what I do, custom work,” Penn, who had no previous family members who were a blacksmith, explained.

Penn indicated that he has done such a variety of different iron work that he doesn’t know that he has a particular style.

“What I prefer to do is practical items with decorative elements,” he stated.

His creations can range from household items to gates, railings on the porch of a home or stair railings within the home. He explained the railings are many times for new construction and are in a modern style, but some of them are more rustic or more classic.

“I make a lot of fireplace sets and kitchen pot racks and towel racks. I was making a lot of hooks (wall and coat) originally, and I still make a lot of those. I started pretty quickly doing custom work. So really, it was whatever somebody asked me for, I would try to make it,” he stated.

Today his clientele still ask for these items, along with many other projects. He recently shipped a froe to a woodworker, and a timber framer asked for two large timber framing chisels.

Penn has not limited himself to tools available to a blacksmith from years past.

“I have another shop near here that I lease, and I have welders, plasma cutter and that kind of stuff in there. So what I will do a lot of times is that I will come over here and I will cut the steel and forge it and I will bring it over there and weld it up,” he stated.

“I don’t do blacksmithing every day. I like to do a variety of things, but whenever I want to, I have work to do,” he stated regarding blacksmithing work.

It was one of the original founders of the Blacksmith Association of Missouri, Bob Patrick, who helped Penn learn some of the elements of blacksmithing. Penn terms Patrick his favorite teacher. Penn indicated he was a little self-taught, but that he had teachers. He feels the teachers gave him a really big head start.

“It’s a lot more frustrating. You could learn all of it on your own, but you gain a huge boost with the instructors,” Penn stated.

One of the areas that Penn feels he benefited from having an instructor was in learning forge welding.

“It was very difficult for me until I learned from a teacher. That was the primary reason I went to Bob Patrick’s classes. He’s one of the best at forge welding in the states. I learned it well and enjoy it and I’m actually going to be teaching a forge welding class up at the Missouri School of Blacksmithing later in the year. It’s not that hard if you have somebody to show you. It’s mainly all in having the fire right, and a couple of other little things,” Penn stated.

Dealing with people on their requests is an important part of blacksmithing for Penn.

“There are blacksmiths that really enjoy the blacksmithing. They’re not much into people. They can just stay in their shops and forge all day, and that’s not me. That’s why I don’t sell online. I enjoy the people part of it. To make something for someone and I can hear how it’s working for them years later, or how they are enjoying it, or I can see it in the house or on the porch with the railings,” he stated.

Penn does sell some of his work at two area retailers-Jean’s Healthway in Ava and at Earth Outdoors in Mountain Grove. He indicated a major part of his work comes from repeat customers and word of mouth, along with a facebook page

The interaction with people is why Penn states he enjoys demonstrating and teaching.

Penn has been adding elements to his shop throughout his time blacksmithing. These have included tools, a masonry forge and materials. Penn stated that a blacksmith does have the ability to make his own tools, and he has made many of his tools, but not all of them.

One of his shop anvils is almost 100 years old. He repaired part of the striking surface on the 170 pound Trenton anvil, and still regularly uses it. Another anvil in his shop is not initially made to be used as an anvil, but is a heavy piece of metal, which he found in a scrap yard for $25. He indicated it serves the purpose well. Penn had started out with a forge made from a brake drum. He stated that forge would radiate heat out at him. Today he works on the masonry forge of his own construction. He pointed out he likes the forge because it is open above the fire allowing him to run a longer piece through it if he wishes. Also with the chimney being behind the forging area the smoke and heat bends away from him. He explained he built the forge after having attended one of Patrick’s classes. Patrick had a similar forge and used primarily a coal forge in his blacksmithing. Penn uses both the coal forge and a propane forge.

“I use primarily a coal forge for one off projects and use the propane forge when I have more mass production, like when I’m doing a railing and need to put a bunch of twists in bars. I can just run them through there,” he said.

Along with his own blacksmithing, Penn does sell coal to other smiths.

“I sell enough I figure I get to burn my coal for free. Persons come from a couple of hours to get coal,” he stated.

He estimates that depending on the project he uses about 30 pounds of coal in a day of forge work, but if doing a forge welding project will probably use more and if doing smaller projects he would use less. He sells the coal for $12 per 50 pound bag.

Because the wrought iron used by blacksmiths in the past is now difficult to find, Penn has had to shift to modern metals and to what he can find in various locations.

“I mostly use mild steel and whatever I can scrounge. So I’ll use different junk yard steels. I use a lot of automobile parts-coil springs, leaf springs,” he stated.

“I actually started collecting materials before I started blacksmithing, and that was up in northern Minnesota. I did forestry work up there. That’s where I first got the money to get blacksmithing tools. And up there the climate doesn’t rust the steel as bad, it’s dryer. I went up there for about six years and we’d be working out there, planting trees. I collected a lot of stuff up there, different metal, and would haul it back. The boss was kind enough to let me store it in the work van until we’d come back,” he stated.

His work with wrought iron has been primarily limited to repair. He stated he has a little of the material which he has collected over the years.

The majority of his work is a single item or set (such as fireplace irons), he stated.

“I don’t enjoy the mass production part as much. Early on I did a project were I made a thousand of something and I got kind of tired of making them after a while. I did get pretty fast at it,” he stated.

Tool repair can pose some of the biggest challenges in Penn’s blacksmith work.

“It sounds simple, but I’m trying to figure out why did it break in the first place and how am I going to get it better or even have it as good as it was. On the technical side you need to know the heat treating and steel you’re working with and be able to repair it in such a way that it is better than it was,” Penn said.

Penn stated there are a couple of areas in blacksmithing he would like to potentially try.

“I haven’t got into lock making, but I don’t have a particular desire to do some of that finer mechanical stuff, locks and latches. I’ve done simple latches of course,” he stated.

Penn stated that he doesn’t do a lot of work with others, but he does enjoy working with other craft people on projects.

“One of the orders I’m going to work on is hardware for a chest. A woodworker is building a chest for a client, and I’m going to build handles, hinges and a latch.

Penn stresses you are always learning when blacksmithing.

“I have had a lot of different students and most of them they just try it out. They do a little bit and fade on and do other things, but a couple of guys have really took off with it. One is better than me in several areas. He used to call me up with questions and now he calls to tell me what he’s doing and to teach me,” Penn said.

“I would say it probably took me five years to get reasonably proficient as a blacksmith,” Penn stated, while pointing out that this involved general things.

Penn used a quote from master blacksmith Francis Whitaker, who was recognized by the National Endowment for the Arts, when considering how long it takes to become a master at the trade.

“After 20 years you may consider yourself a master, at 40 years you learn you’re just over the threshold.” 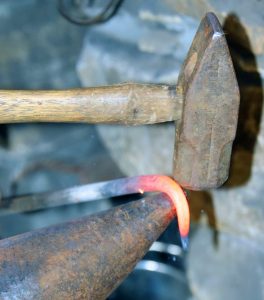 Doug Berger/Herald
A metal rod being bent over the anvil in the blacksmith shop of Matthias Penn.