The Ava Bears varsity took the championship of the Family Pharmacy Tournament at Mountain Grove with a win over Willow Springs Saturday, 52-45.

The teams played close through the first two quarters. The Bears were up by one at the end of the first quarter, and took a 27-25 lead into the locker room at halftime.

It was a big third quarter that saw the Bears start to separate from Willow Springs. Ava outscored Willow Springs, 16-6, in the quarter. The Bears had to hold off Willow Springs in the final quarter, but Ava sank nine free throws to hold the lead.

The Bears had advanced to the championship game with wins over Dora and Mountain Grove.

Ava defeated Mountain Grove, 63-48, in the second round game of the tournament.

Mountain Grove used a six point run to pull within one late in the second quarter, but the Bears scored the final four points to go into halftime with a 25-20 lead.

Ava stretched out their lead to 42-33 at the end of the third quarter.

The Panthers pulled within seven early in the final quarter, but Ava sank eight free throws to close out the game.

Ava had opened the tournament with a 71-42 win over Dora. Dora’s only lead of the game came on the first score of the game, from then on it was all Ava. The Bears held a 16-7 lead after one quarter of play.

Dalton and Mendel were named to the all-tournament team, and Dalton was also the tournament Most Valuable Player.

Doug Berger/Herald
Ava Bear Blayne Mendel drives to the basket against Mountain Grove in the second game of the Family Pharmacy Tournament held in Mountain Grove. 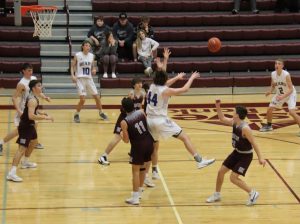 Doug Berger/Herald
Ava Bear Andrew Dalton flips the ball back out to Ethan Donley in the game with Mountain Grove during last week’s tournament. 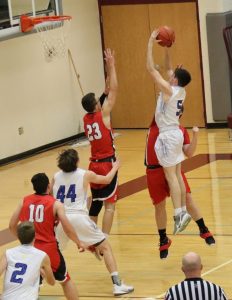 Doug Berger/Herald
Ava Bear Mason Cole puts up a shot from the lane in the opening game with Dora of the Family Pharmacy Tournament in Mountain Grove. 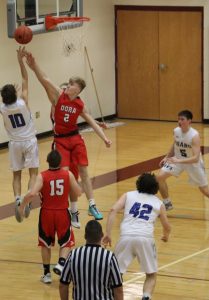 Doug Berger/Herald
Ava Bear Payton Evans lays up a shot over a Dora defender in the Family Pharmacy Tournament.