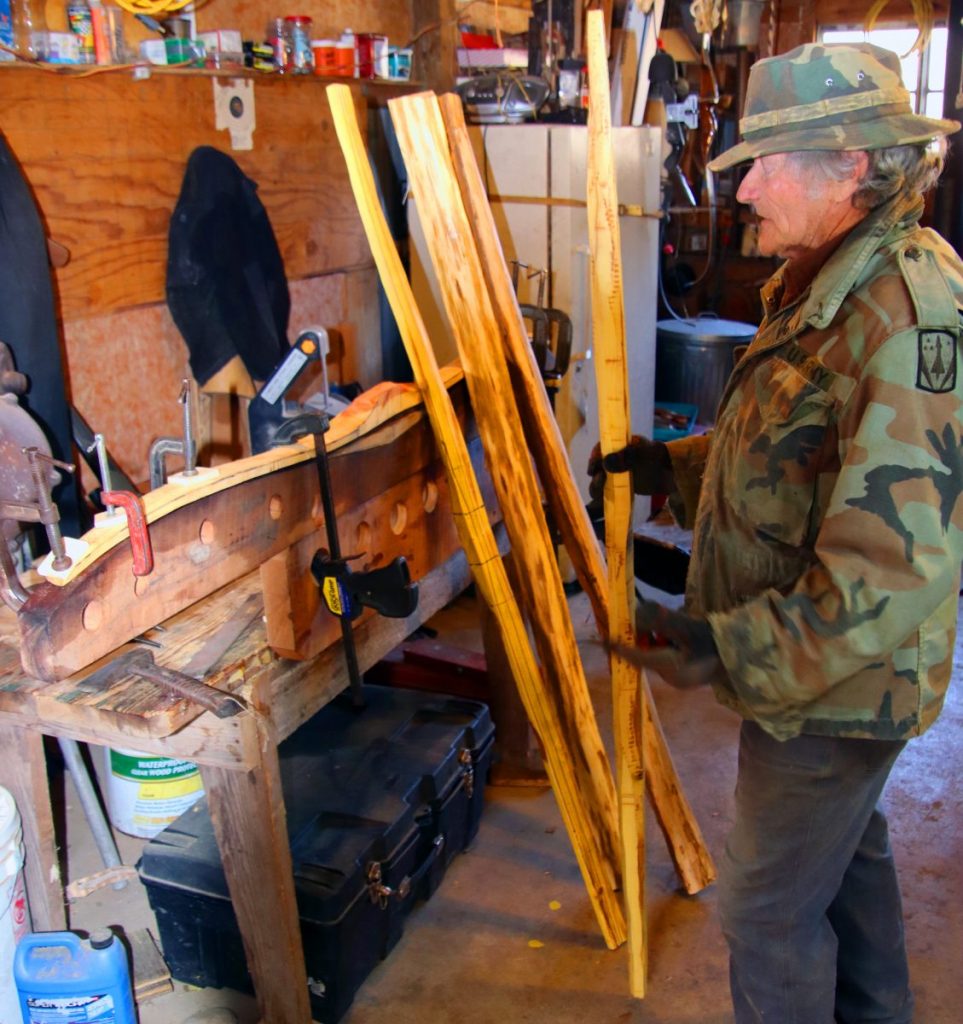 Doug Berger/Herald Butch Stone at bow bending form he uses in his shop.

Butch Stone’s interested in flint knapping was not for its artistic element, but for a desire to see if he could kill a deer with an arrow point he made for himself.

Along with knapping out his own arrow points, Stone enjoys primitive hunting using those arrow points with bows he has made.

“I first became interested in flint knapping as a kid, and I got to wondering if I could kill a deer with it and I did,” he stated.

Stone explained he basically taught himself.

“I saw some others doing it and thought, if they can do that, I can to,” he said.

Stone has set himself up in a small workshop, along a creek bottom at the end of a dead end road. His location has had the occasional black bear on the bottom field adjacent to the workshop, and a persimmon stand on an adjacent ridge that was a favorite site for deer hunting. He has lost that deer hunting site, because it now sits within the developing Bryant Creek State Park, he stated.

“I’m not a good flint knapper. I’m good enough to do what I want to do, but a lot of people I have taught have passed me. They want to make pretty, I want to kill a deer, so they have far, far surpassed making a tool. They are making art,” he stated.

Even though Stone takes a more practical approach to flint knapping, many of his creations would come under the category of art to most observers.

“I have a bunch of friends that do it. It’s a lot of fun when you get together and sit around in a circle, waiting for someone to break one,” he laughed.

“For myself I like Georgetown flint. It makes really nice points,” he stated.

Stone also has made points from Obsidian, volcanic glass-like material which is very sharp.

“If you monkey with Obsidian, you’ll bleed,” he said.

Most of the arrowheads he finds are a Dickson point style, Stone stated. Some of the remnants he finds carry a red tint, which can indicate it has been heat treated, he explained. Heat treating can make the stone work better, he stated.

Stone stated that his father also collected arrowheads, and he has a display of some of his father’s finds in his home.

Stone has sold the arrowheads he makes and demonstrated flint knapping at area festivals. He explained that with the Covid situation many of these have been canceled during the past year. He stated people like to buy big arrowheads, even though the size he wants for hunting are small.

He also has taken his interest in knapping arrowheads one step further and has been making his own bows. He has also made many of the tools needed including a form to bend his bows and an arrow spine tester.

Stone killed his first deer with a bow in 1974. It was not one of the bows he made. Even though he does sell bows and gives bow making classes, he still considers bow making as a hobby.

Last year Stone built eight bows. He has six or seven bows of his own that he uses for hunting.

“They would be considered long bows, I guess,” he stated.

“I’m a hunter. I want a good dependable straight bow,” he said.

“Nothing better, but not a good wood to learn on, pretty tough. Hickory staves are perfect and easy to deal with,” he said.

He indicated that he would someday like to make a bow out of yew wood. Most of the English longbows were made out of yew, he stated.

Stone splits out his own staves for his bows. A good Osage hedge stave can cost $150 if you were to buy it, he said.

Stone does make bows out of cedar, but it is not a bow wood he would recommend, because it can break, he stated.

He explained he will back some of his bows with elk sinew. Backing a cedar bow or other wood with sinew will help strengthen it. He also pointed out that sometimes he has to work around an irregularity on a bow by leaving a little extra material at the location when the bow is worked down.

His sinew comes from friends who have killed elk when hunting in Colorado. He has also used white tailed deer sinew, some of it coming from packing plants. The preparation of the sinew is a slow process. After the sinew has dried, it must be pulled apart into the strands to be placed on the bows. Then it is meticulously glued to the back of the bow to give it that added strength.

He used to steam bend his bows, but now he uses a heat gun for the process. For the final forming he uses a horse rasp and wood scraper.

The pull level on the bows he makes for himself are between 55 and 60 pounds, but he was recently helping with a bow for another hunter that had approximately a 75 pound pull.

Stone has made his own arrow shafts. His preferred wood for shafts are Port Orford Cedar, but he has also used some native woods such as Dogwood.

Stone explains that the long bow is less popular because the hunter has to take a shot from a closer range. He estimates that about 20 yards is the maximum. This is the length of his target range.

“Hunting is harder with a bow, because you are within a deer’s zone,” he added.

Even though primitive hunting can be more difficult, Stone doesn’t anticipate stopping.

Doug Berger/Herald
Two of the arrow points Butch Stone made for his hunting arrows.

Doug Berger/Herald
Butch Stone with one of his bows.

Doug Berger/Herald
Some of the arrowheads from Butch Stone’s flint knapping. 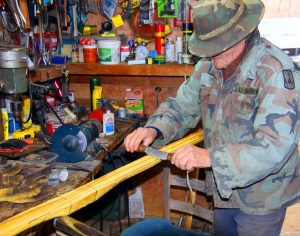 Doug Berger/Herald
Butch Stone working on a bow made from a hedge (Osage Orange) stave. 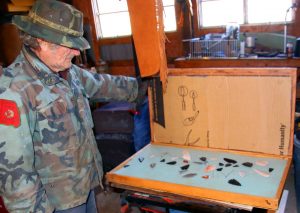 Doug Berger/Herald
Butch Stone with a display of arrowheads he has made and would sell at the festivals and demonstrations he attends.