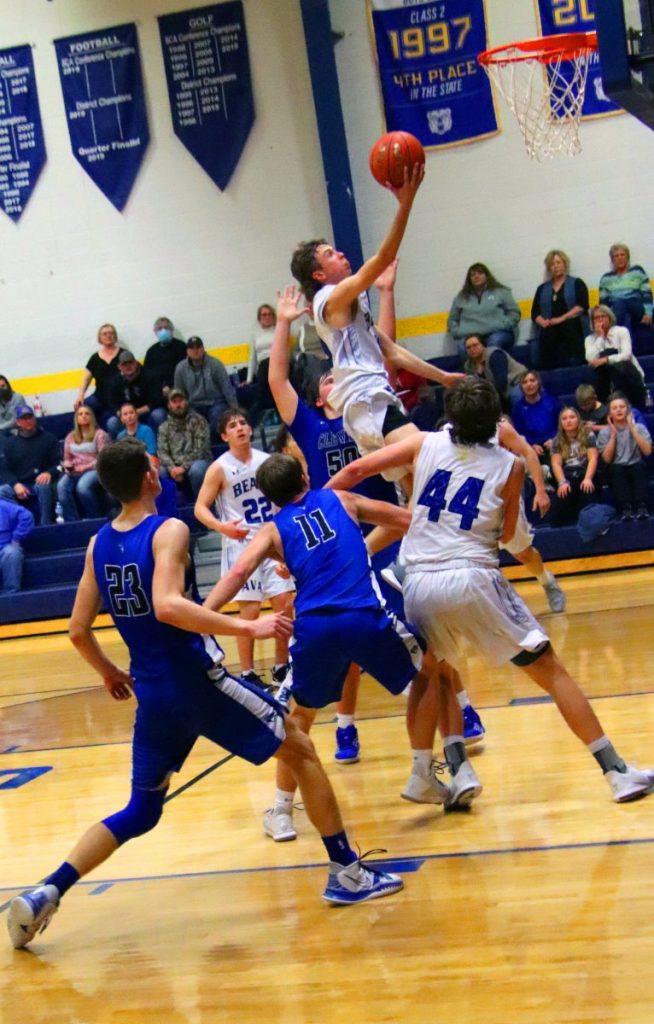 Doug Berger/Herald Payton Evans drops in a shot in the Bears non-conference win over Clever.

The Ava Bears had to come from behind to capture a 46-38 non-conference win over Clever in play Friday night and improve their season record to 13-3.

The Bears fell behind Clever, 11-6, after one quarter of play. Clever was able to stretch their lead out in the second quarter, taking a 24-17 edge into halftime.

Payton Evans kept the Bears within striking distance in the second quarter, scoring nine of Ava’s 11 points in the quarter. Clever had built up a 10 point lead before Evans went on his scoring run.

Ava took the lead on the first score of the fourth quarter, 30-29, when Evans dropped in a two-point shot. With 4:36 remaining in the game, Clever tied the score at 32. Andrew Dalton would put in a two-point shot to give Ava the lead, which they held for the remainder of the game. Quinton Donley followed Dalton’s two-point shot with two three-pointers to help pull the Bears away from Clever. Ava scored the last six points of the game.

Donley and Evans led the scoring for the Bears with 11. Dalton had 10; Mason Cole and Bryse Dodson, six; and Blayne Mendel, two.

The Bears are playing in the Family Pharmacy Panther Classic in Mountain Grove this week. Ava’s varsity will face Mountain Grove on Thursday at 6 p.m. The final varsity competition of the tournament will be played on Saturday. The varsity third place games will be played at 4:30 p.m. and the first place game will follow at 6 p.m. in the arena. The junior varsity is also competing in the tournament. They will face Mountain Grove on Thursday at 7:30 p.m. The first place junior varsity game will be played in the arena on Saturday at 1:30 p.m. with the third place game being played in the high school gym at 3 p.m.