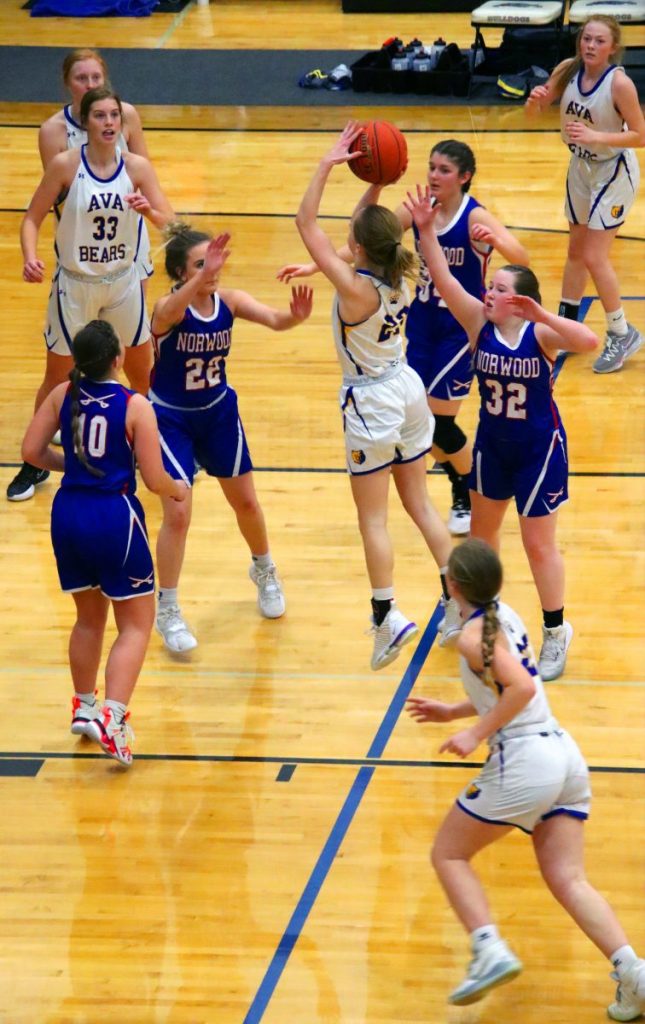 Herald Archive Ava Lady Bear Hannah Evans surrounded by Norwood defenders drops in a shot from the edge of the lane.

The Ava Lady Bears opened the Cabool Classic Tournament with a 68-19 win over Norwood on Monday evening.

Both teams had a tough time putting that first basket through the hoop. Sara Mendel dropped in the first two points of the game after almost three minutes of play. Almost two more minutes went off the clock before Hannah Evans would put in a free throw. The Lady Bears would put nine more points on the scoreboard in the first quarter while holding the Lady Pirates scoreless.

Ava picked up the pace in the second quarter scoring 20 points. Norwood scored the first points of the second quarter, but the Lady Bears responded with two baskets of their own. Norwood’s leading scorer, Cassie Chadwell, sank a three. Ava came back with a 12 point scoring run and were up, 28-5. The Lady Bears went into halftime with a 32-7 lead.

Chadwell sank a three early in the third quarter, but other than one more two-point basket, that was the only Norwood scoring of the period. The Lady Bears continued pushing the ball up the floor scoring 23 in the quarter.

With the Ava starting five sitting on the bench for most of the final quarter, Ava outscored Norwood, 13-7.

Mendel led the scoring for Ava with 28. Evans was the only other Lady Bear in double figures with 10, but six other Ava players put points on the scoreboard. Lexie Gastineau had nine; Olivia Gastineau, seven; Celia Fossett, five; Keely Akers, four; Baylan Alexander, three; and Laynie Isaacs, two.

With another win the Lady Bears will play in the tournament championship on Friday at 5:30 p.m., a loss in the second round would have them playing in the third place game at 7 p.m. on Friday.

Against Mountain Grove the Lady Bears were up by three points after one quarter of play, and used a big second quarter to go into halftime with a 26-11 edge. Ava continued to stretch their lead in the third quarter, outscoring the Lady Panthers, 17-5. The Lady Bears scored 12 in the final quarter and held Mountain Grove to seven.

In the second conference game of the week, Willow Springs went out to a 16-11 first quarter lead. The Lady Bears came back strong in the second quarter to outscore Willow Springs, 19-13, and take a one point lead into halftime, 30-29. It was the third quarter which gave the host team the edge. The Willow Springs squad outscored Ava, 27-14, in the quarter. Ava was not able to make up the difference in the final quarter.

The Lady Bears will be playing in the Mansfield Tournament next week. 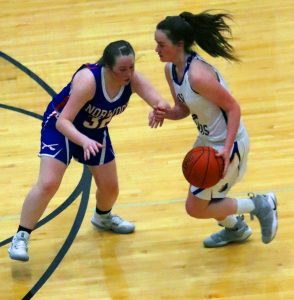