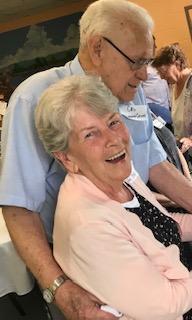 Due to health concerns and large group gathering restrictions, there will be no funeral or memorial at this time.  When able, family members will gather in Ava, MO for an intimate remembrance.

Memorials can be made to the SGCMH Friends Foundation and to promote Ste. Genevieve tourism please donate to DowntownSainteGenevieve@dwntwnsg· a Nonprofit Organization.

On October 18th, 1940. Eulah Janice Norman was born.  Jan grew up in Ava, Missouri leaving to attend college at Bolivar Baptist University.  On a break from studies Jan was swept away on the dance floor by her future husband, Calvin Sutherland.  The couple entered and won many dance contests. However, their biggest win came on August 20,1959, when the couple wed.  Their next victory was the birth of their daughter, Angie on June 25, 1961.

During their 61 ½  years of marriage the couple moved 23 times. Cal’s job as an insurance adjuster took them all over the country.  In 1972 his job brought the family to Festus, Missouri.  Here Jan became active in the community serving as president of the Twin City Welcome Wagon Club and helped fundraise for local scholarships and other community needs. At this time she became involved in her career.  Anyone who has tasted Jan’s baked goods and candies would swear she was a professional.  She was!  Jan rose from the rank of part time bakery assistant to bakery manager at the Festus National Grocery Store.  She then was promoted to St Louis area supervisor for the National food stores bakeries.  She was responsible for opening new bakeries, training employees, and visiting all stores to ensure a quality product was produced.

In 1995, after going to lunch at Lucretia’s Restaurant in Ste Genevieve, Jan  fell in love with the house next door and bought it within a week. She would tell the story as if she went to lunch in Ste. Genevieve and never left.  After retiring from National, Jan enjoyed cooking at Lucretia’s.  She then opened a small gift shop in her home. The success of her shop forced her to expand three times! She eventually bought a building and opened Collage. This expanded again from a gift shop to a florist. At this time Jan also became involved in the French Colonial Merchants Organization and helped plan the annual Christmas Walk.

Besides her tiring involvement in her business and community, Jan also cared for her family.  She took care of her sister Joyce and her mother Nellie in her home.  Her greatest joy was helping raise two of her grandchildren, Ryan and Allisyn.  Grandma spent countless hours sharing her love with her family.  Her smile, soothing voice and sweets made everything better. She will be missed by many more loving nieces, nephews, cousins and friends.

She saw the good in everyone she met and had a kind and generous heart.  Jan would wave and smile to anyone she passed on the street.  She believed we are all “neighbors” and should treat everyone you meet and greet as though they were family.  Home is not a place, but where you are and who you are with “in the moment”.

Online condolences can be left at www.baslerfuneralhome.com.