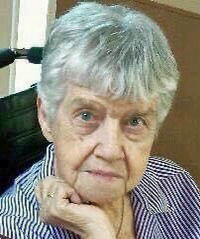 Jean and Truman John Loesch were united in marriage on August 9, 1948 in Cole Co. Missouri and to this union they were blessed with two children.

Jean worked at Nelly Don and North Kansas City Hospital while living in Pleasant Valley,( North Kansas City) for many years while her husband Truman worked for General Motors, upon retirement they moved to Ava in 1986.

She was preceded in death by her parents, her husband Truman, two granddaughters, Andrea and Amber, and a son-n-law John Riggs, Jr. and several brothers and sisters.