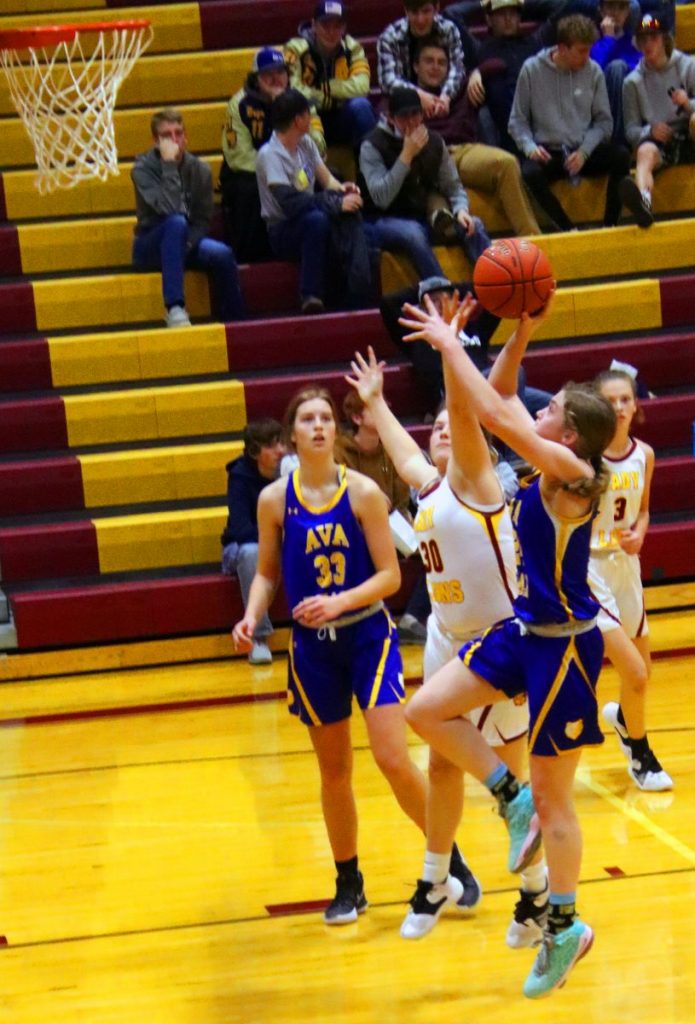 Doug Berger/Herald Ava Lady Bear Olivia Gastineau drives to the basket in the win over the Mansfield Lady Lions.

The Ava Lady Bears improved their record to 9-4 with a 59-33 win over Mansfield January 7.

The teams traded the leads early in the first quarter, but Ava went on a seven point run to take a 13-9 lead. They held the lead for the remainder of the game. The Lady Bears finished out the first quarter with a 14-11 edge.

Ava outscored the Lady Lions, 10-7, in the second quarter.

It was in the third quarter that saw the Lady Bears put the game away. Three Mansfield players found themselves in foul trouble, and Ava outscored Mansfield, 18-4, in the quarter. The Lady Bears continued to stretch their lead in the final quarter, outscoring Mansfield, 17-11.

In the first game of South Central Association play, the Lady Bears defeated Liberty, 76-34, on January 4.

Ava came out strong in the first quarter and took a 17-9 lead at the end of the quarter. The Lady Bears kept up the pace in the second quarter outscoring Liberty, 13-9. Evans scored 18 of her 22 points in the game in the first half.

The Lady Bears outscored Liberty, 20-12, in third period to stretch out their lead to 67-30 going into the final quarter.

Along with Evans’ 22 points, Mendel and Lexie Gastineau were also in double figures. Mendel had 21, and Gastineau, 12.  Fossett had seven; Akers and Olivia Gastineau, five; and DeAndra Huff and Chloe Barnum, two.

In the final quarter, Lebanon was able to secure the win by making their free throws, sinking seven of eight attempts.

In the second round game, the Lady Bears defeated Hillcrest, 66-28.

Ava established its edge early, doubling up on Hillcrest in the first quarter, 16-8. The Lady Bears put the game away in the second quarter, outscoring Hillcrest, 24-10, and leading, 40-18, at halftime.

Olivia Gastineau led the scoring in the game with 17. Mendel had 14; Evans, 10; Fossett, nine; Lexie Gastineau, eight; and Alexander and Akers, four.

The Lady Bears followed up their win over Hillcrest in the tournament with a 55-46 victory over Bolivar.

In the Bolivar contest, Ava had to come from behind to continue its advance in the tournament.

Bolivar took a 15-7 lead over the Lady Bears after one quarter of play. Ava cut the Lady Liberators lead to four at halftime, 24-20.

A big third quarter gave the Lady Bears a 36-32 lead going into the final period of play. Lebanon sank several long distance shots, but the Lady Bears were perfect from the free throw line sinking 11 free throws to help stretch out their lead.

Three Ava players were in double figures. Olivia Gastineau led the Lady Bear scoring with 18. Lexie Gastineau and Mendel each had 13. Evans with seven and four from Fossett rounded out the scoring.

Ava had opened the tournament with a 50-41 loss to Central.

The Lady Bears had a 9-5 first quarter lead, but Central outscored Ava, 18-6, in the second quarter. Central was able to continue to expand their lead in the third quarter going into the final quarter up, 39-26.

Evans led the scoring for the Lady Bears with 17. Mendel had 10; Olivia Gastineau, nine; and Lexie Gastineau, two.

The Lady Bears have the second seed in the Cabool Classic Tournament. Ava will open play at the tournament on Monday, Jan. 18, against Norwood (7 seed). They will open play in the new gym at 7 p.m. A win in the first game and they will matchup on Tuesday, Jan. 19, at 8:30 p.m. in the old gym. 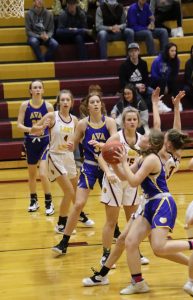