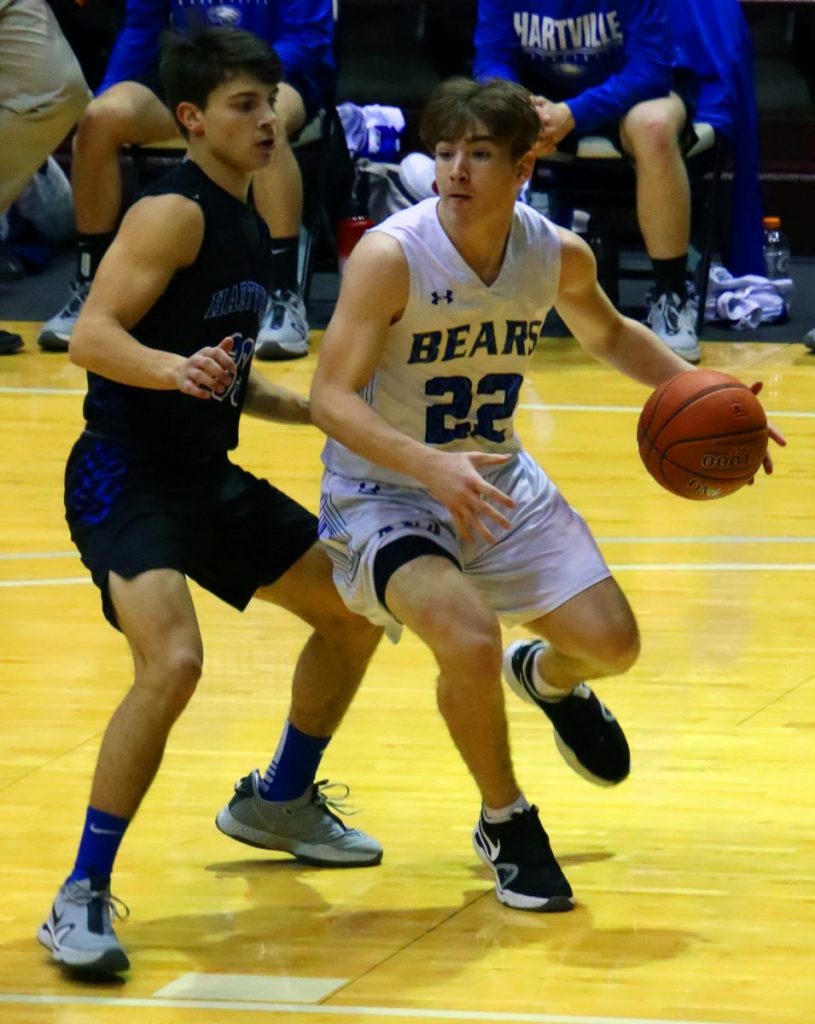 The Ava Bears captured fifth place in the annual Greenwood Blue and Gold Tournament Thursday with a 49-45 win over Willard. The Bears had entered the tournament as a number eight seed.

The Bears had advanced to the fifth place contest with a multiple overtime win against Skyline on Wednesday, 83-72.

Ava took the first quarter lead against Willard, going up 13-6. The Bears stretched their halftime lead to 26-18.

Willard took the third quarter, outscoring the Bears, 21-9, to take the lead going into the final quarter. Ava responded in the final period to put 14 points on the scoreboard while holding Willard to six.

Andrew Dalton led the scoring with 28. He was the only Bear in double figures. Mason Cole had eight; Quinton Donley, six; Ethan Donley, five; and Blayne Mendel, two.

In the game with Buffalo, the Bears saw the Bison go out to a 20-14 first quarter lead. Ava came back in the second quarter to outscore Buffalo, 17-7, and take a four point lead into halftime.

Buffalo cut a point off the Bears’ lead by the end of the third period, but Ava would come back in the final quarter with 16 and held the Bison to nine.

Dalton led the Ava scoring in the game with 34. Cole had 16; Quinton Donley, six and Payton Evans, four.

Against Hartville, the Bears ran into last year’s Blue and Gold champion and the defending Class 2 state champion. Ava was up against a team playing strong defense and sinking shots from long range. Hartville scored 37 percent of their points from three-point range.

Hartville jumped out to an 18-7 first quarter lead. They opened their scoring with the first two of their three-point shots.

The Bears were held to just seven points in both of the first two quarters. The Bears were outscored 19-13 in the third quarter. Ava scored the last nine points of the game, but couldn’t overcome Hartville’s lead.

Ava faced another long range shooting team when they followed up the Hartville contest with the Skyline matchup. Skyline recorded 15 three-point shots in the game, scoring over 50 percent of their points from long range.

The Bears jumped out early, taking a 14-3 first quarter lead. Skyline would use the three-point shot to pull within three at halftime, 26-23. The teams played even in the third quarter, and Ava held on to their three point lead going into the final period. Skyline would outscore the Bears in the quarter to tie the game at 56 at the end of regulation play.

Ava would eventually outscore Skyline in overtime play, 27-16, to take the win.

Four Bears were in double figures for the game. Dalton led the scoring with 31. Quinton Donley had 19, including five three-pointers. Cole had 15; and Ethan Donley, 10. Mendel contributed five and Dodson, three.

The Bears will travel to Hollister on Friday and host Conway on Tuesday.

Doug Berger/Herald
Ava Bear Andrew Dalton puts up a shot in the second round game of the annual Blue and Gold Tournament.