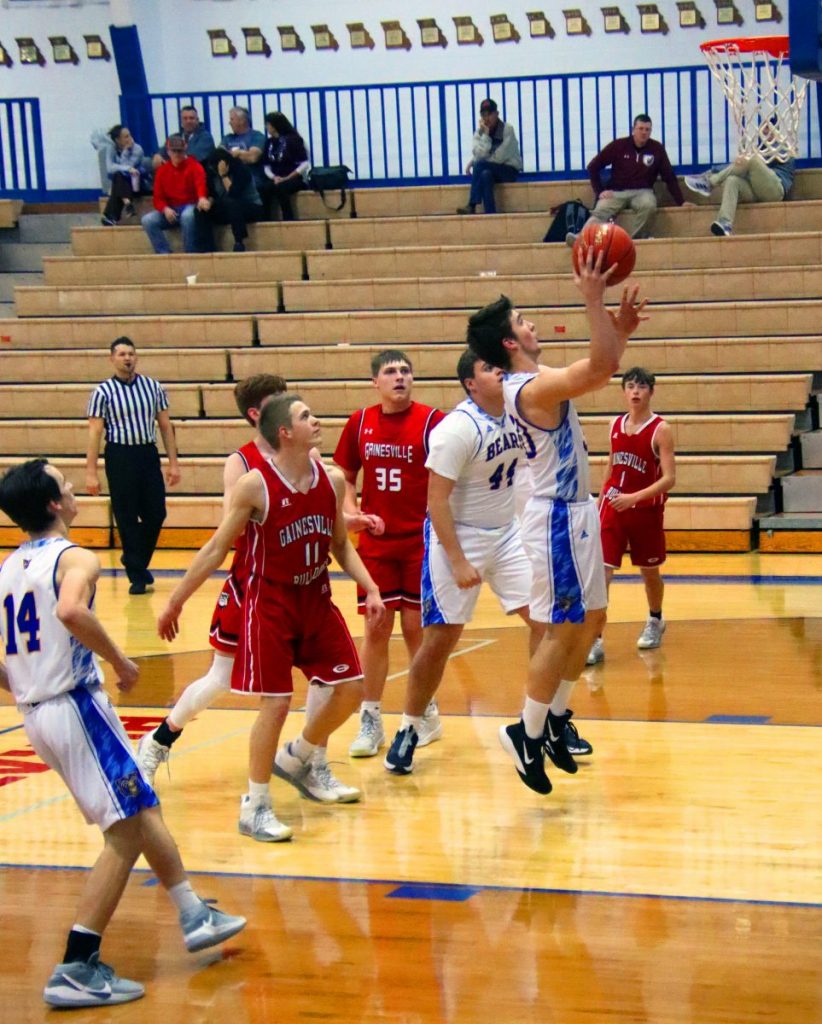 Doug Berger/Herald Ava Bear Carter Mahen lays in a shot against Gainesville at the Norwood Tournament.

The Ava Bears basketball squad added two more wins to their record and stand at 6-1 after last week.

The Bears opened the week with a 61-55 win over host Fair Grove.

Ava Bear Andrew Dalton put 32 points on the scoreboard in the effort. Thirteen of his points came from the free throw line. Dalton was 13 of 14 from the charity stripe on the evening. He scored all but two of the Bear’s first quarter points.

Ava went on top 13-8 after one quarter of play. The second quarter saw Fair Grove come back, outscoring the Bears 19-12. Fair Grove scored nine of the points in the quarter from beyond the three point line. Mason Cole kept the Bears close at halftime, scoring six of his 13 points for the game in the second period. Fair Grove took a 27-25 lead into halftime.

The Bears came out of halftime and scored 26 in the third quarter to go up 51-42. Dalton again put 11 points on the scoreboard in the quarter.

Ava was outscored 13-10 in the final quarter, but Fair Grove couldn’t overtake the Bears lead.

The Bears junior varsity was edged by Fair Grove, 44-42.

Ava held an 11-8 first quarter lead and were up 20-17 at halftime. The teams played even in the third quarter, but Fair Grove was able to outscore the Bears, 16-11, in the final period to take the win.

The varsity Bears finished up last week with a 56-46 win at Forsyth.

Ava jumped out to a big first quarter lead. Cole scored six of his team leading 18 points in the quarter. The Bears finished out the quarter with a 19-8 lead.

Both teams put 10 points on the scoreboard during the second quarter. Forsyth used three three-point shots to help edge the Bears in scoring in the third period, 13-12. Forsyth again scored three times from long range in the final quarter, but Ava matched them in scoring in the quarter and held the edge.

Ava came out in the third quarter and outscored Gainesville, 15-11, to pull within two, 34-32. But the Bears were never able to overtake Gainesville.

Leading the scoring for the Bears in the game was Breeding with 17, including five three-point shots. Mahen had 16; Stout, three; Sudbury, two; and Konner Nelson, one

Ava had opened the tournament with a 52-38 win over Mansfield.

Against Mansfield the Bears had a 27-22 halftime lead, and outscored the Lions, 13-7, in the third period to stretch out their margin.

Mahen and Breeding each had 19 in the contest. Little, Sudbury and Nelson contributed four, and Grady Goss had two.

Ava dropped the second round contest with Thayer, 49-35.

Thayer took an 18-8 first quarter lead, and the Bears came back in the second quarter to outscore Thayer, 10-9, to cut Thayer’s halftime lead to 27-18. Thayer was able to stretch out their lead in the third and fourth quarters to take the win.

Little led the scoring for Ava with 13. Mahen had 10; Breeding, seven; Nelson, three; and Sudbury, two.

After play in the Blue and Gold Tournament, the Bears will return to regular season play on January 5 when they host Mansfield on January 5. 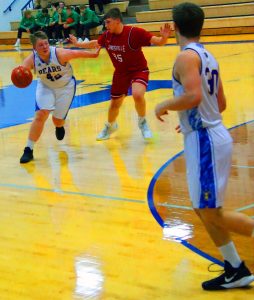 Doug Berger/Herald
Ava Bear Quin Breeding drives around the Gainesville defense in the third place game of the Norwood Tournament.