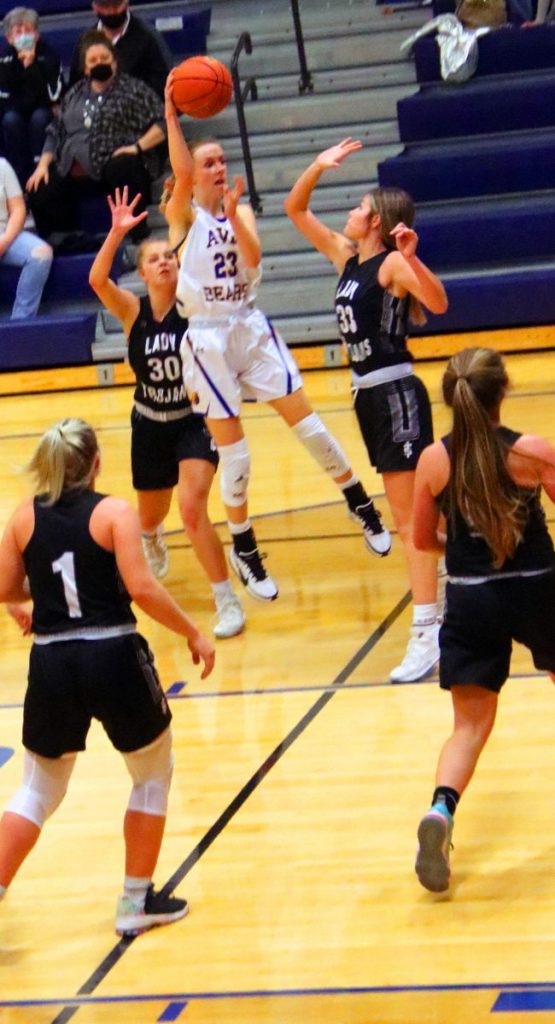 The Ava Lady Bears basketball squad split their last two games taking a 56-36 win at Fordland, but falling to Sparta, 63-55, in a hard fought contest at home.

Seven Lady Bears put points on the scoreboard in their win over Fordland. Olivia Gastineau led the Ava scoring with 14. All of her scoring came in the second half. Eight of those points came from the free throw line. She sank all six of her free throws in the final quarter. Lexie Gastineau added 13 points to the Lady Bears total. She also scored all but three of her points in the second half.

The Lady Bears jumped out to an 18-7 first quarter lead, but saw Fordland outscore them, 12-4, in the second quarter. Sara Mendel, the only other Lady Bear in double figures in the game with 10, scored the only Ava points in the second period.

Ava came out at halftime and put up 20 third quarter points, while holding Fordland to eight.

The Lady Bear scoring was rounded out with Keely Akers putting in seven; Celia Fossett, six; Hannah Evans, five; and DeAndra Huff, one.

In the loss to Sparta, the Lady Bears always held Sparta within striking distance. Ava was up 11-10 after the first quarter of play with the Lady Bears pushing the ball inside. Sparta picked up a number of fouls in the quarter.

In the second quarter, Sparta was able to tie the game with 4:56 remaining in the half. The teams traded the lead for the remainder of the half with Sparta coming away with a 26-25 halftime lead.

Early in the third period, Sparta had stretched their lead out to seven points. The Lady Bears went on a five point run to cut the margin to two. The Lady Trojans Laney Humble would sink a three to put Sparta back up by seven. Ava was able to cut the edge down to four by the end of the quarter, 39-35.

Sparta stretched its lead back to nine early in the final quarter.  The Lady Bears came back with seven points to again pull within two of Sparta.  With 1:40 remaining in the game, Ava tied the contest at 51. Sparta would sink another lead to retake the lead, and the Lady Bears were not able to overtake the visitors.

Olivia Gastineau and Mendel, both had 19 points in the game. Evans had nine; and Lexie Gastineau, eight.

The Lady Bears will not play again until January 4 when they travel to Mtn. View. They will return home on January 8 when they host Conway.

Doug Berger/Herald
Lexie Gastineau lifts a shot along the baseline in the Sparta contest. 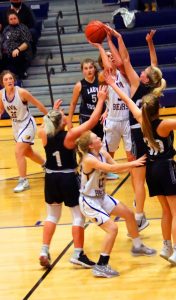 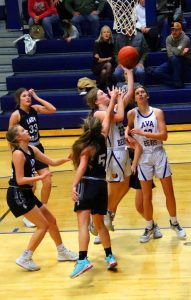