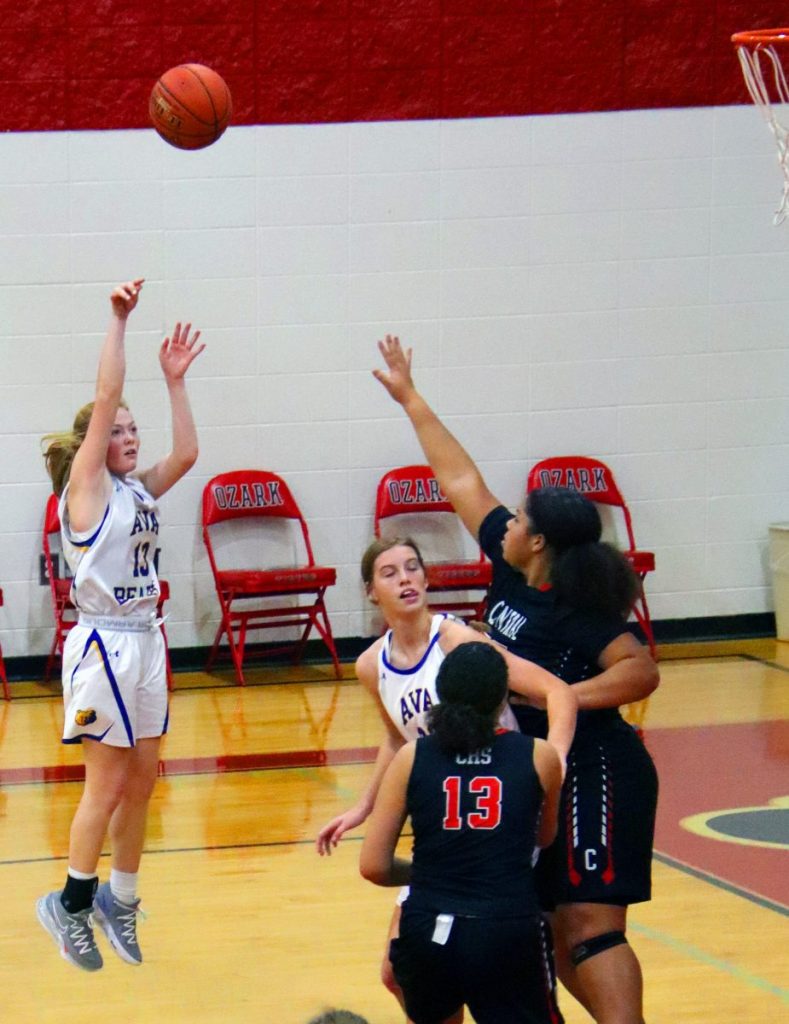 Doug Berger/Herald Lexie Gastineau puts up a shot against Central in the first round of the Ozarks Lady Classic.

The Ava Lady Bears took all three of their games in the Ozark Lady Classic.

The Lady Bears opened play with a 78-62 win over Springfield Central.

Central scored the first two points of the game, but Ava followed up with a 12 point run. The Lady Bears finished out the quarter with a 13-5 lead. Central gave Ava many long rebounds in the quarter when Central missed from three-point range.

Central went inside early in the second quarter and scored the first eight points to tie the game. The Lady Bears responded with a six point run of their own to retake the lead. The teams traded the lead twice in the quarter, before Ava went into halftime with a 27-25 edge.

Early in the third quarter, Central again tied the game, but Ava came back with a 14 point run to go on top 44-30. A lead they did not give up for the remainder of the contest. The Lady Bears went into the final quarter with a 53-42 edge. 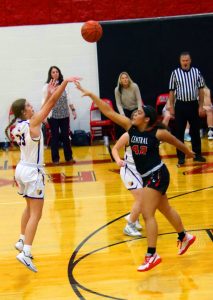 Doug Berger/Herald
Sara Mendel scores two of her 21 points against Central.Central in the first round of the Ozarks Lady Classic.

Doug Berger/Herald
Hannah Evans lays in a basket against Central.

In the second round game, the Lady Bears would defeat Parkview, 64-59.

The Lady Bears would outscore Parkview 18-6 in the second quarter to take a 33-18 lead into halftime. Parkview came out in the third quarter and outscored Ava, 17-13, to chip into the Lady Bears lead. The fourth period saw both teams put up 42 points in a high scoring finish, but Ava was able to hold on for the win.

The Lady Panthers finished out the event with a 60-42 win over the Ozark junior varsity.

Evans led the scoring for the Lady Bears with 18 points. Mendel had 11 points; Lexie Gastineau and Olivia Gastineau, 10; Fossett, seven; and Alexander, six.

Ava put the game away early taking a 28-6 first quarter lead and held a 40-17 halftime margin. The Lady Bears stretched out their lead in the third period, allowing Seymour one point while scoring 25.

The Lady Bears junior varsity fell to Seymour, 29-25. The teams played close throughout the contest, but Seymour was able to pull away in the final quarter outscoring Ava, 13-5.

The Lady Bears will play three games on the road before returning home on January 8 to host Conway.