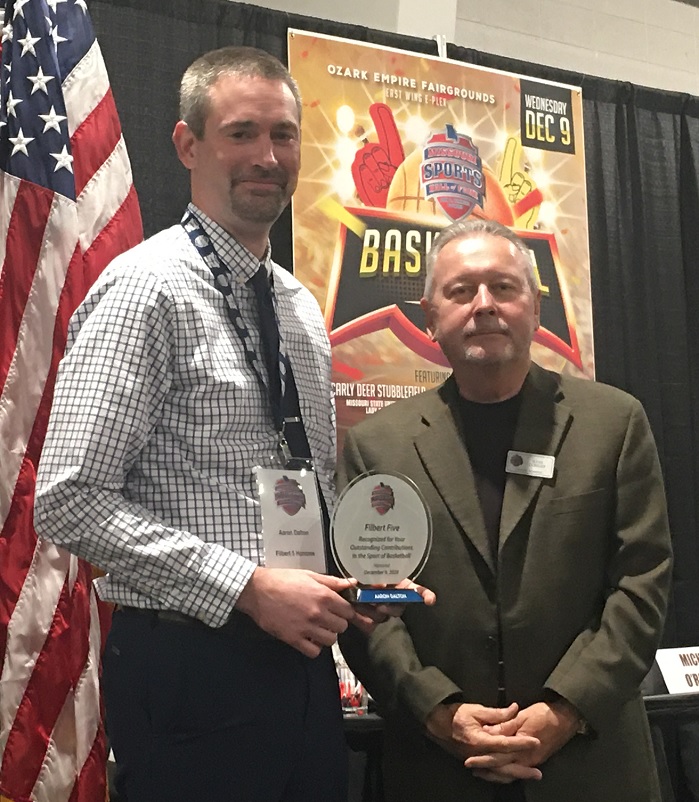 Aaron Dalton was recognized December 9 as a Filbert Five award recipient by the Missouri Sports Hall of Fame. The presentation was made during the Hall of Fame’s Basketball Tip-Off Luncheon.

The award is presented to high school and college players who made positive impacts on the game.

The Hall of Fame release indicated that Dalton was a First Team All-American in NAIA Division II in 2000, after leading College of the Ozarks to its first national championship game. The Bobcats finished 25-9 that season, with Dalton earning his second consecutive first team all-conference honor and receiving the Conference Player of the Year Award. Overall, he scored more than 1,700 points and was later inducted into the C of O Athletics Hall of Fame in 2006. That all followed a standout career at Ava, where Dalton was a three-time All-South Central Association selection in the mid-1990’s for the Bears and scored more than 1,300 career points. In his senior year, he led Ava to its first district championship in more than 20 years as the Bears finished 21-9, with Dalton earning All-District and All-Ozarks.

“It was after Christmas of my senior year, before it ever occurred to me that I might be able to play basketball in college,” he said.

He explained his senior year was the first year Ava was back in the Blue and Gold and they made the finals. During the tournament the C of O coach saw some of the Ava games and reached out to him.

Dalton, who now serves as assistant superintendent for the Ava School District, also coached basketball for 10 years at the high school level. He was an assistant coach at Branson for four years and head coach at Gainesville for six years.

He played basketball and baseball while in high school, and he would still like to see students playing multiple sports.

“I think our coaches here do a great job of encouraging our kids to do multiple things,” he stated.

“I believe youth sports presents an opportunity to teach kids life skills. My opinion is it’s as an effective way to do that as anything we can do here at school…to be a part of a team…sacrificing maybe what I want in the interest of what’s best for the group. We know, if we can get a kid involved, not just sports, but any activity, their success rate just skyrockets. Whether that they feel accountable to their teammates or it’s a connection they make with coaches. There’s just some lessons that students can learn, and be taught in those settings, that is just hard to do in other places,” he said.

He pointed out there were many things he learned from his involvement in sports.

“You’re not always going to win, and what I learned from that and what’s most important is to make sure you are doing your best to be successful, and the steps that go into that process, that’s what’s important. What is important is that process of every single day trying to do the right things, trying to be better today than I was yesterday. As a coach that’s something I told the kids every day. And our goal is to be better today than we were yesterday,” he added.

He stated all a player or coach can control is their own efforts and preparation.

“If we prepared our best and played our hardest, the outcome kind of takes care of itself. If the other team’s better on that given day, so be it. You played your best, that’s all you could do,” he said.