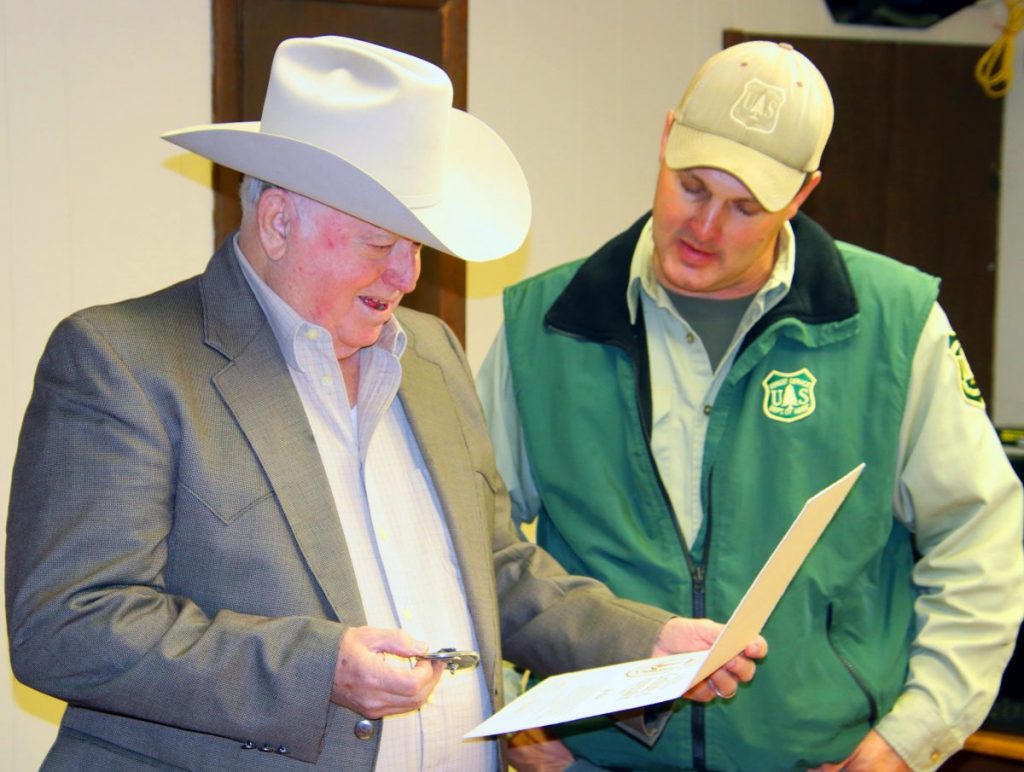 Doug Berger/Herald
Joe Hale and his wife, Eva, visit with current and past members of the Forest Service he worked with during his more than 40 years of grazing cattle on Forest Service land.

“We want to have you in today and tell you we appreciate the last 40 years and what you have done. Whatever we need, you’re always willing to do it. We never have to twist your arm. We never have to call you twice. It sure makes life easier for us,” Forest Service range technician Michael Stewart told Hale.

Hale was presented a belt buckle and certificate of appreciation at the recognition ceremonies. The certificate of appreciation read “for support to the range program on the Ava/Cassville/Willow Springs Ranger District over the past four decades. Your working relationship with the Forest Service has been of great benefit to maintaining Mark Twain National Forest range allotments. The contributions you have made ensure the open lands will be available for future generations.”

“I’ve been lucky to work with a lot of good people,” Hale stated.

Hale indicated he has been a permit holder for over 40 years.

“I bought a guy out in Taney County, and he was one of the original permittees on Forest and so that got me started,” Hale, an Ozark County native and now Ash Grove resident, stated.

“My dad gave me a heifer calf when I was nine years old, and I’ve only been out of the cattle business two or three times, just short periods of time. I’ve been a cattleman all my life,” Hale said.

“I’d work all day and feed cattle at night. Some people like to play golf. I like to raise cows,” Hale, who has also operated other businesses, stated.

Currently on the Ava/Willow Springs District there are 17 areas identified and designated as grazing allotments, Stewart explained. These allotments are permitted to run just over 600 head. He pointed out that each allotment has an annual operating plan, and the Forest Service uses the allotments as a management tool for such things as maintaining warm season grasses and to keep  lands open. It is part of the Forest Service’s multi-use approach.

The amount of land included in the Forest Service allotments has changed over the years.

“I had 23,000 acres and it was cut up into three different blocks. We could rotate the cattle in one year and rest that one,…that way we didn’t hurt the grass and it was always good for the cows, but then back a few years ago they decided the glades down there were too fragile to graze, and so they substituted some farm land that they had bought… and so they assured me I wouldn’t lose any cow numbers, but really it was not as good a deal as the other one was,” Hale explained about when he started.

“On the Forest, I think in Missouri 150 cows is the upper limit. I grazed that for a few years and then they cut me back to 100,” Hale explained.

Hale stated he also had cattle on private land.

“I’m like a sponge when it comes to learning about cattle. I tried to learn everything I could get my hands on, but one of the main things that I think has helped me is I’ve studied guys that made it work. And I’ve been fortunate to be friends with several of them, and I think I’ve learned more from that then the books I’ve read,” Hale said.

“I was born and raised in the Polled Hereford business, and I don’t think there is any better breed around. Although everyone knows the market went black, and I grazed a lot of black baldy cows and they’re a good cow, but I don’t think anybody can tell the difference with the hide off,” he said.

“I’ve enjoyed the Forest. I’ve had a lot of people ask me why I would mess with it,” Hale stated.

“The Forest Service sets the number of cattle you can run on it, which gives you ample grass and you have less worming and that sort of thing, because they don’t run over the same ground.”

“There is some Blue Stem down there on the glades as good as it is in the Flint Hills of Kansas, even though the land may not be as good. My cattle wintered well down there. Feeding on that Blue Stem they did just as well as with hay,” Hale said.

Hale pointed out there was differences between operating on the Forest Service allotments and on a more conventional operation. One of the differences is learning to find your way around. The Forest Service personnel and Hale reminisced about how you could get turned around when working your way through an allotment.

“I rode out several nights pretty late, I’ve been lost a time or two,” Hale said.

Hale had always used horses to work with his cattle on the allotments.

“I think the four-wheelers, when they got started was the biggest problem I had. They opened gates and wouldn’t close them,” he said.

The Forest Service lands operate on a multi-use format, allowing for other activities, along with the cattle raising.

He stated he would regularly have to check the gates on the allotment.

“I was offered a job with the Forest Service one time in Wyoming. They came back here to buy Fox Trotting horses and I helped them buy a few and I sold them a few. There was a ranger at Sheridan, Wyoming, who offered me a job out there, but it was for less money than what I was making, so I turned it down,” Hale said.

Hale said he was told that there was still a place for horses in the mountains. The Forest Service could rent a helicopter for $1,000 per hour, but a horse could do some of the jobs cheaper, he indicated.

Hale said he grew up on Fox Trotters, but he started using quarter horses when he needed to do some roping.

“If you’re going to check your cattle and are not planning on having to rope one then it is the Fox Trot horse,” Hale stated.

Hale indicated that he also used cattle dogs a lot.

“I roped a lot, but always pretty local. There was an old Texan that lived up here when I was kid, down by Pontiac, and he won Cheyenne. He kind of took me under his wing and taught me what I know about a rope,” Hale said.

“I always liked to keep from running and roping them if I could, because it makes them wild. Cows get wild enough. I always tried to hand feed my heifers the first year that I wintered them. That works out for years later.”

“A good cow dog is worth three cowboys in that brush down there. I have friends in the Flint Hills, but gathering them up there is child’s play compared to down here,” he said.

“It’s not for the faint of heart to operate down there. I’ve enjoyed it. I like the bigness of it. I like the solitude of it. The main thing is you have to like it. If you don’t then it’s a real problem. But cattle eat grass and things humans can’t eat, and make some of the finest food in the world. And they are a very essential thing,” Hale added.

“If it hadn’t been profitable for me I wouldn’t have done it. You wouldn’t do it for recreation. I never got rich out of it, but I made a little money out of it,” he said.

“I want to thank all of you guys for the years put in to help me,” Hale told the Forest Service employees.