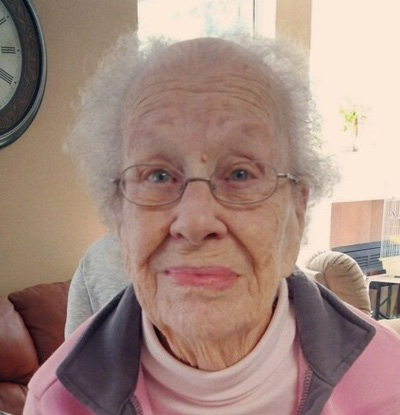 Esther Dye, 98 years, 10 months and 10 days went on to her Heavenly home on November 25, 2020 in Jacksonville, Florida. Esther was born on January 15, 1922 in Kiowa County Colorado, near Eads, Colorado to Harry and Bessie Kelley.  Esther went to school in Colorado and had graduated from the eighth grade when her parents moved back to Missouri, settling in the Sweden community east of Ava.

On August 5, 1937 Esther and Clifford Dye were united in marriage in Mt. Vernon, Missouri and to this union they were blessed with three sons, Glenn, Terry, and Tony.

Esther was a Christian and member of the Ava General Baptist Church that she attended with her husband Clifford.  After moving to Jacksonville, Florida she attended Christ Episcopal Church with Tony and Julie.  Family was very important to Esther; she looked forward to and enjoyed every opportunity to get together.

Esther was preceded in death by her parents, husband Clifford, one sister Opal Rippee, son and daughter in law Glenn and Betty (Prine) Dye, and son Terry Dye.

Services will be Friday December 4, 2020 @ 1:00 pm @ Clinkingbeard Chapel, Ava, MO with visitation 12:00 pm – 1:00 pm officiated by Rev. Oren Alcorn. Esther will be laid to rest next to her husband Clifford in the Ava Cemetery.

In lieu of flowers, memorials may be made to the Douglas County Museum and Historical Society, Ava General Baptist Memorial, or Gideons International.  Due to the spread of Covid-19 we request everyone attending to please wear a Mask. Thank you. Online condolences may be made to www.clinkingbeardfuneralhome.com.