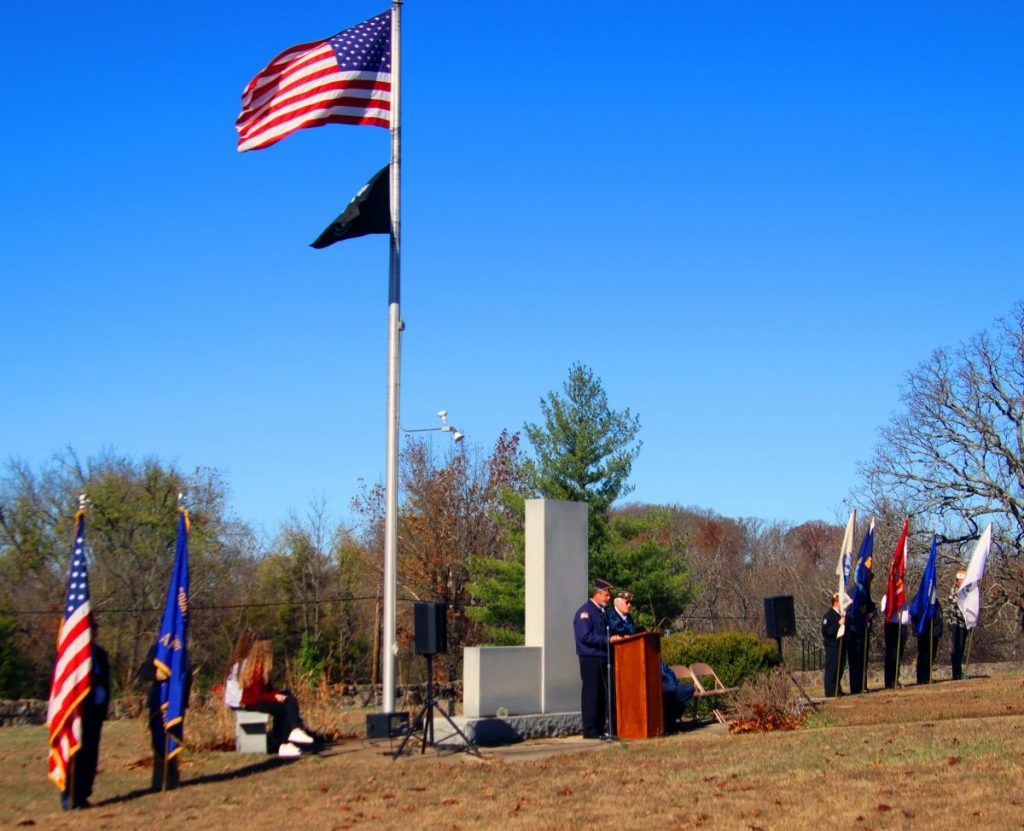 Tom Bentley provided the featured address. Among his comments in the address, Bentley opened with his adaptation of President Abraham Lincoln’s Gettysburg address.

Bentley went on to list the numbers of military members who had died in the wars and conflicts the country has been involved in including Revolutionary War, War of 1812, Mexican-American War (1846), Civil War, Spanish-American War, World War I, World War II, Korean War, Vietnam (1961-1975), Gulf War (1990-1991), and Iraq and Afghanistan.

“Today is an appropriate time to recall these,” he stated in his address.

“Our U.S. Constitution was established to protect individual rights from oppressive government. This is the reason for checks and balances and the Bill of Rights.”

“Most people, in other places in the world, have not been as blessed as we here in the U.S. Other nations seem to respect strength and are more careful in national relations when strength and resolve are perceived. Perceived weakness makes us an easy target. The battles our military have fought were not just clever plots of movies. They were real. The final outcome was not a script-everything was on the line,” Bentley pointed out.

“Why did they go and why did they serve? Jesus said, ‘greater love has no one than this, that someone lay down his life for his friends.’ Without the dedication of these individuals, you and I would not have experienced the freedoms that we have enjoyed all our lives. They represented us as citizens of this great nation, because of the foundational beliefs of our way of life as stated in the U.S. Declaration of Independence that all men are created equal before God, and that we are endowed by our Creator with certain ‘absolute’ rights. That among these are life, liberty and the pursuit of happiness.”

“Before becoming a member of our Armed Force, individuals must perform an oath that states in part ‘I do solemnly swear (or affirm) that I will support and defend the Constitution of the United States against all enemies, foreign and domestic, that I well bear true faith and allegiance to the same…so help me God.’ Members of Congress have similar wording in their oaths of office as they begin their respective duties. If the oaths to support and defend the Constitution were honored, as sworn to, our Republic would not be threatened, as it is today. Let no one think that officials are elected to rule over us. They are elected to represent us. We are citizens, not subjects,” Bentley stated in his address.

“For our own good and the benefit to our children and grandchildren, you and I must convey how important freedom is to us, what it cost and how easy it is to lose. If we neglect to do so, aren’t we essentially communicating that the tens of thousands of veterans who served, fought, were wounded are killed, did not matter-we don’t care?” he added.

“When I look at this flag and pledge my allegiance to it and the United States of America because of what this nation has traditionally stood for, I’m pledging allegiance to our form of government, known as a republic. The flag represents that. This is one nation under God. I acknowledge that God is the Supreme Being and that this nation is accountable to Him. Not only that, but I realize he is witness to my pledge, and I, personally, am accountable to Him,” Bentley said in his address.

“Our nation’s foes have been formidable. Why did we have victory? The last verse in our National Anthem gives insight as to what our earlier leaders thought about it. Francis Scott Key wrote, ‘Oh, thus be it ever when free men shall stand between their loved homes and the war’s destination, blest with victory and peace, may the heaven rescued land praise the power that hath made and preserved us as a nation. Then conquer we must, when our cause it is just. And this be our motto: In God is our trust.’ Righteousness exalts a nation, but sin is a reproach to any people. Blessed is the nation whose God is the Lord,” Bentley related.

“For more insight as to what our early leaders were thinking, read the Declaration of Independence, the U.S. Constitution, The Holy Bible. So, it is for us, the living, to be dedicated here to the unfinished work which these honored veterans have thus far so nobly advanced. It is rather for us to be here dedicated to the great task remaining before us-that from these honored dead we take increased devotion to that cause for which they gave the last full measure of devotion, that we here highly resolve that these dead shall not have died in vain-that this nation shall have a new birth of freedom and that government of the people, by the people and for the people shall not perish from the earth,” Bentley concluded.

American Legion Post 112 Vice Commander Jerry Johnson had welcomed those attending the ceremonies, and introduced participants in the activities.

Jackie Brooks placed a wreath at the ceremony. 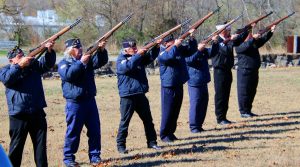 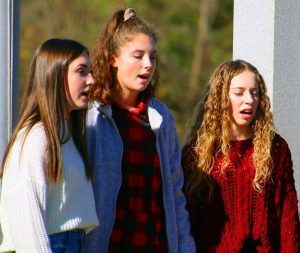 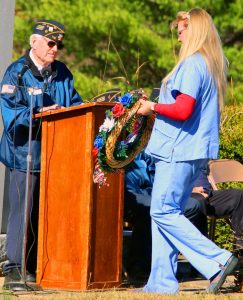 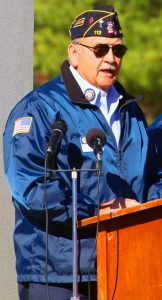