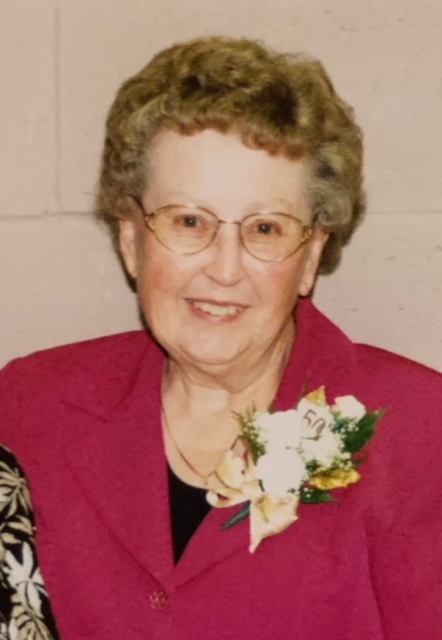 Angels were dispatched on the afternoon of November 2, 2020 to escort Virginia Lora Cushing Deo, 89, from Taylor House Hospice in Des Moines, Iowa, to her eternal home. Her family rejoices that she has been united with her Creator and Savior in heaven through her faith in Christ.

Virginia was the eldest of four children born to Mathias Francis and Irma Lucille (Golden) Cushing in Des Moines, Iowa, on October 22, 1931 in the midst of The Great Depression. This farmer’s daughter loved her life growing up on dairy farms outside of Van Meter, Iowa, feeding the chickens and gathering eggs, helping prepare meals for the men who worked on the farm, gardening, sewing, canning, rendering lard, making lye soap and helping to wash laundry by hand. Every summer Saturday night the family went to downtown Van Meter for the community bandstand concert. When she was old enough Virginia played her clarinet in these concerts. Sundays were spent attending church and then alternating between both sets of grandparent’s homes for family dinners with all the cousins. Virginia was involved in the Evangelical United Methodist Church in Van Meter, 4H, basketball, band and chorus.

Following graduation from the Van Meter High School in 1949 she enrolled at AIB College in Des Moines studying stenography and taking business classes while playing guard for the AAU women’s basketball team. One of her biggest adventures was traveling to Mexico with the AIB team to play in competition.

After the completion of her studies she worked for a real estate company in Des Moines and moved to an apartment with her sister, Margaret, who was dating her soon-to-be husband Verlynn Beal. They introduced Virginia to Verlynn’s friend and close neighbor from Maxwell, Wendell Deo. After a short courtship Virginia married the love of her life at the age of 23 in the EUB Church in Van Meter on October 8, 1955 in a beautiful satin and Chantilly lace gown she created herself. The farmer’s daughter had now became a farmer’s wife.

They were blessed with three sons — Dennis, Robert (Bob) and Andrew (Andy). Wendell lost his right arm in a farming accident in the fall of 1957, less than a year after Dennis was born, while chopping silage for a neighbor. When her husband initially questioned whether he would be able to return to farming Virginia reassured him saying, “I’ll be your right hand.” He returned to farming successfully with her by his side. After renting different farms in the area, they moved in 1965 to the family farm that is still owned and operated by their son Bob with his wife, Leslie, and their daughter Lizzie. Over the years Wendell hired many local people to help him on the farm and they all fondly remember the wonderful lunches Virginia prepared for them.

Virginia and Wendell traveled extensively with the Wally Byam Caravan Club for many years, visiting nearly all 50 states in the course of their travels. They also enjoyed playing in the Caravan band.

As a lifelong artist Virginia’s interests included painting, ceramics, candle making, knitting, crocheting, sewing numerous Care Bears and crafting of all kinds, along with being an exceptional seamstress who made many of her own clothes. She was also a wonderful cook and baker of bread. After their move to Missouri she became a prolific quilter, leaving her family with many beautiful works of art by which to remember her. She was a member of quilting guilds in both Iowa and Missouri, garnering many quilt show ribbons. Virginia dearly loved her boys, but she also longed for a daughter. That wish was finally fulfilled when Bob began dating Leslie. The two shared many common interests and enjoyed working together on countless creative endeavors for over 40 years.

In 1991, Wendell and Virginia decided it was time to purchase their “retirement farm” near Ava, Missouri, where they continued to buy feeder cattle at local auction barns to be finished on the family farm in Iowa. Every spring and fall they returned to Iowa to help with planting and harvest for several weeks while living in their Airstream camper on the family farm. Virginia spent those days with Leslie helping with daily tasks, working on quilts and enjoying her grandchildren. In Missouri they were involved in the Ava United Methodist Church and the Gentry Church, activities with many friends, annual sorghum making, local fish frys and meals at the Ava Senior Center.

In January 2020, they moved to Windsor Manor Assisted Living in Nevada, Iowa, to be closer to their family. Wendell became the first victim of COVID-19 in Story County on April 27, 2020. After finally being released from quarantine as an asymptomatic COVID-19 survivor, Virginia moved to the Memory Care Gardens at Windsor Manor where she was cared for by her wonderful aides as the family was no longer allowed to visit inside the facility with the restrictions in place during the pandemic. She also received amazing care from Suncrest Hospice nurses in her last month. She was transferred to Taylor House Hospice the day she left this earth so her family could be with her.

Those who will miss her most include her children Dennis Deo of Maxwell, IA; Bob (Leslie) of Maxwell, IA; Andy (Jennifer) of Fishers, IN; her grandchildren Zach (Alyssa) Deo of Ham Lake, MN; Lizzie Deo of Maxwell, IA; Matthew Deo of Ames, IA; Ben and Nick Deo and Aiden and Alicia Forrester of Fishers, IN; great-granddaughters Isabelle, Ivy and Isla Deo of Ham Lake, MN.  She will also be missed by her sisters Margaret Beal of Adel, IA, and Janice Hedburg of Underwood, MN, along with many nieces, nephews, cousins and numerous friends in both Iowa and Missouri.

A public visitation will be held Wednesday, November 11, 2020, from 6-8 p.m. at Rasmusson-Ryan Funeral home in Nevada, IA. Masks are required.

Due to COVID-19 restrictions, an invitation-only funeral service will be held Thursday, November 12, 2020,  at 10:30 a.m. followed by a public graveside service at the Maxwell Cemetery. Live streaming of the service will be provided by Rasmusson-Ryan Funeral Home and will also be available for later viewing.

In lieu of flowers the family would be honored if you would choose one of the following memorials: Heifer Project International (https://www.heifer.org/); Maxwell Historical Museum; Ankeny Christian Academy (https://acaeagles.net/) and the Maxwell United Methodist Church.

Because of the restrictions in place during this time, the family would love to have you share memories, tributes and stories with them online through Rasmusson-Ryan Funeral Home, Nevada, Iowa, at https://www.rasmussonfh.com/.

“We are confident, yes, well pleased rather to be absent from the body and to be present with the Lord.”