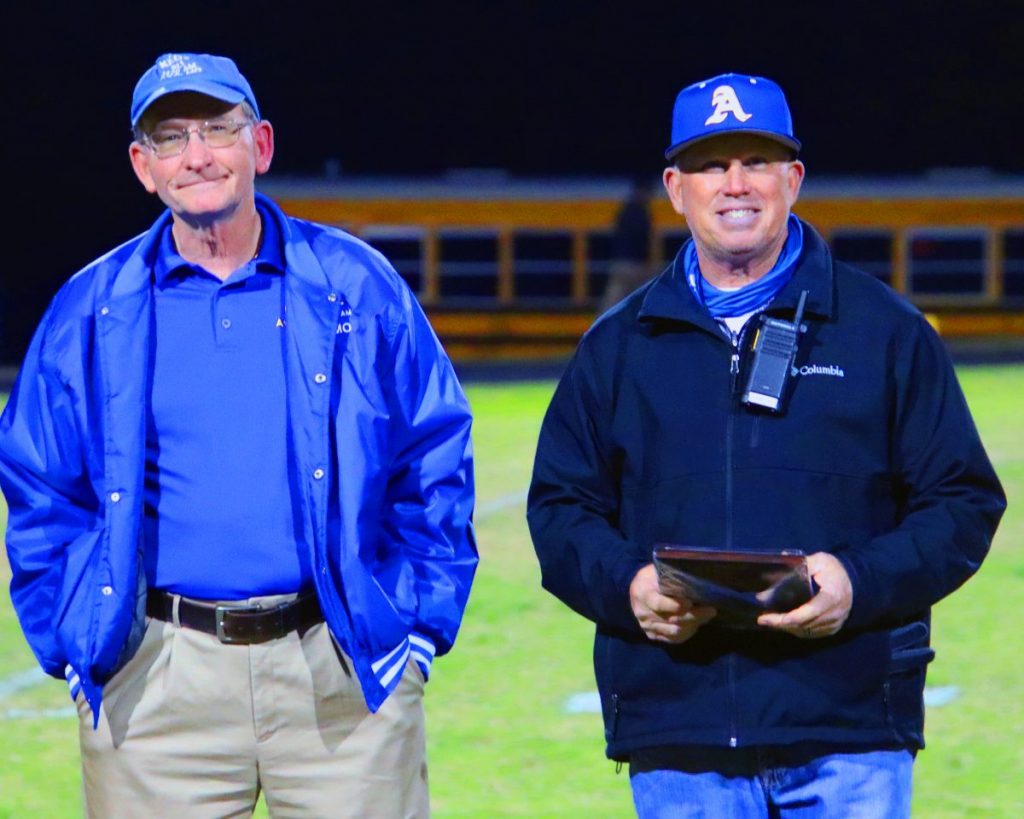 Doug Berger/Herald Joe Corum, the voice of Ava Bear football, was presented an award by Ava schools athletic director Rex Sawyer recognizing his 35 years of service to the program. Friday was his last night in the football broadcast booth on a regular basis.

For 35 years Joe Corum has been the Voice of Ava Bears football on KKOZ in Ava. Friday night was his last night as a regular in the football broadcast booth. Corum was honored for his work with a presentation by Ava athletic director Rex Sawyer at halftime of the Ava-Mountain Grove district football game.

Greg Davis was also honored at Friday night’s football game. He has been alongside Corum in the broadcast booth for 32 years.

Corum stated that for the better part of 35 years he was involved in all the Ava Bears sports broadcasting, but when the station hired Tyler Watterson, the sports other than football were turned over. He stated it has been three or four years since he regularly broadcast basketball.

Corum and his brother, Art, bought the Ava radio station in 1983. His radio duties will now no longer include broadcasting sports on a regular basis. He feels he will miss the play by play broadcasting, but not the travel to and from the contests.

“At the time, I was a sophomore at Harding College. I had just gotten married and needed a job,” Joe Corum said.

“It wasn’t too long until they sent me on assignment to some little school to do a football game with a cassette machine. I’d never done a football game in my life. I’d never done play by play before in my life. So I’m sitting there, five feet off the ground, because they didn’t have a press box, and I didn’t have a clue what I was doing, and that was the beginning of football broadcasting.”

After five years at Searcy, he went to El Dorado, Kansas, to a radio station which would cover up to five different football games on Friday nights. He explained you couldn’t put them all on the air and you would tape them. They spent all day Saturday running football.

When he began his sports broadcasting career, Corum explained he had no sports background.

“I had no personal sports background. I knew absolutely nothing about sports. I was a debater. I went to college on a debate scholarship,” he stated.

“What I’ve always told anyone doing play by play is I do not care about the technical side of the game, that’s not what mom or dad is listening for. They’re listening to hear the name of their son or their daughter.”

Even though he enjoyed the other sports, football was always his favorite sport to broadcast.

“In football there is always something going on. Twenty-two different bodies out there doing something. The real challenge is to be able to bring that to life, and it’s not hard to do because there is so much going on. So that’s what is fun about it,” he said.

Corum stated that for him, there is no question that the highlight of his football broadcasting career was last year when the Bears went to the state championship game.

“There was nothing like last year. It was an unbelievable experience,” he said.

“Now there have been some extremely good football teams. I’m not certain that last year’s football team was necessarily the best football team, that I don’t know,” he stated

He felt last year’s squad deserved to be playing in a state championship.

Another individual football game that stands out to him was a five overtime game against Mountain Grove played in Ava when Larry Silvey was coaching. Mountain Grove finally took the victory.

“It was an incredible ball game. I had never been more exhausted in my life,” he stated.

Along with the outstanding years and games he has covered in Ava Bear sports, there have also been some that were frustrating.

Corum stated that the injuries the Bears football players suffered this year resulted in somewhat of a frustrating year.

“At the start of this football season, we had a football team, that I think, would have contended until at least the second round of the state football playoffs. I think we had a solid chance of winning the district. In the game with Buffalo, Buffalo was going to lose. We just ran out of time and plays. If we could have defeated Buffalo, and had the same football team, we would be undefeated. We started with a really good football team, but injuries hampered the efforts,” he said.

He remembers another year when the football team played three or four overtime games, and came up short in all but one.

He also remembers the year an Ava Bear basketball team went the full year without a win.

“The thing I admire about sports is that it teaches our kids that you are never perfect. That you will always make mistakes, and even when you win you could have done better. That is one thing we do in our educational system which is invaluable. We teach kids how to lose, as well as to be gracious when we win. That’s one of the things I admire about Dan Swofford and Larry Silvey. They were very good at teaching kids how to lose and how to win without gloating. I think you saw that at the Lutheran North ballgame at Columbia last year. Here we were getting the tar beat out of us and yet we stood tall and held that trophy high and would reach down and pick up one of the other players from the other team and that’s the kind of stuff you want to see,” he stated.

There has been some changes in the facilities available for broadcasting football over the years, Corum indicated.

“The first football game I ever did over at Cabool was on a light pole. I had to climb up a little ladder to this little perch they had suspended on a light pole. And the first game was standing out there in the mist doing football,” he laughed.

“At Salem you were on the other side of the football stadium. Not the side you are on now and you were five feet off the ground and there was a big light pole right in front of you. So anything at the 50 yard line, you couldn’t see. You had to kind of lean out to do the ball game.”

“You’d go over to Willow Springs to do a football game, and they had a press box the size of a couch, maybe a little bit longer, and there would be two radio stations, four people, and you would literally stand elbow to elbow and do the football game.”

“Now you go across the SCA and the facilities are marvelous. They are wonderful. The SCA has done a great job, especially their football facilities, in getting up to speed,” he said.

He indicated that technology has also changed in the radio industry, which allows the station to cover additional ball games.

Another change he has experienced over the years is that he now has the children of the players who played the games he earlier broadcast.

“One of my biggest frustrations, and I know it’s time for me to quit, is because I remember Zach Richards’ (the current Ava Bear quarterback) dad when he was playing sports, and if I’m not careful, I’ll use his name instead of Zach. It’s time to quit when you get to that point,” Corum related.